Raleigh, NC – It was a tight checking game for the first 55 minutes last night before the bottom fell out for the Canes as the LA Kings scored 3 goals in the last 5 minutes. This was the last game before the All Star break. With this being the 5th loss in a row, the break couldn’t have come at a better time.

As coach Bill Peters like to say, the Canes started on time showing speed and tenacity as they kept the puck in the Kings end for the first 3 minutes of the game.

Brock McGinn has been on a great run, playing his heart out, hustling every shift and trying to make things happen.  Midway in the period, he was facing the boards chasing a puck when he was clearly boarded with a cross check to the back, went down like a rag doll but bounced back up, still digging for the puck against the defender who got away with a sure penalty.  That type of effort needs to be contagious for the whole team. McGinn’s hustle coming from the O-zone into the D-zone would end up getting tangled with a King resulting in a double penalty.  No coach would have a problem with that effort or result.

Ward and Budaj Put On A Show

As in the first, the second period was a show for the goalies. Both Cam Ward and Peter Budaj were making grade A saves.

Budaj made one that appeared to be headed right for the net. Somehow, the puck landed on the side of his pads near the knee. Budaj reached back to cover the puck as 6 bodies piled on top of him.

Not to be outdone, Ward was also making saves on what appeared to be sure goals.

The Canes had their chances with a few open net opportunities.  Sebastian Aho, front and center, flipped the puck towards the goal, hit Budaj’s stick, then arm, then the crossbar.  Jordan Staal was on the rebound but that also went high.

On their next shift, Brett Pesce was on the left point and made a beautiful pass to Aho on the doorstep for a one-timer with the near side of the goal wide open, but Aho sent the puck to the middle of the King’s crown logo on the center of Budaj’s chest.

Canes Implode Late in the Third

Everyone in attendance knew, or at least thought they knew this was going to be a 1-0 game and all hope was for the Canes to pull it through.

Shot selections weren’t what anyone wouldn’t define as quality shots but good chance the coaches said to just throw rubber at the net and good things may happen.

King’s coach Darryl Sutter has to be the best coach in hockey to watch and listen to. His facial expressions are priceless and was worth the price of admission on one penalty called which was barely borderline let alone a solid penalty against the Kings.  His press conferences are like a 21st century interview with Yogi Berra. But make no mistake, he’s an excellent coach and knows how to win.

With just under 5 minutes remaining the Kings caught the Canes on a change and converted on the attack.

Less than a minute later Ward made a stick save but the rebound got knocked in as the Canes defense missed a clear. 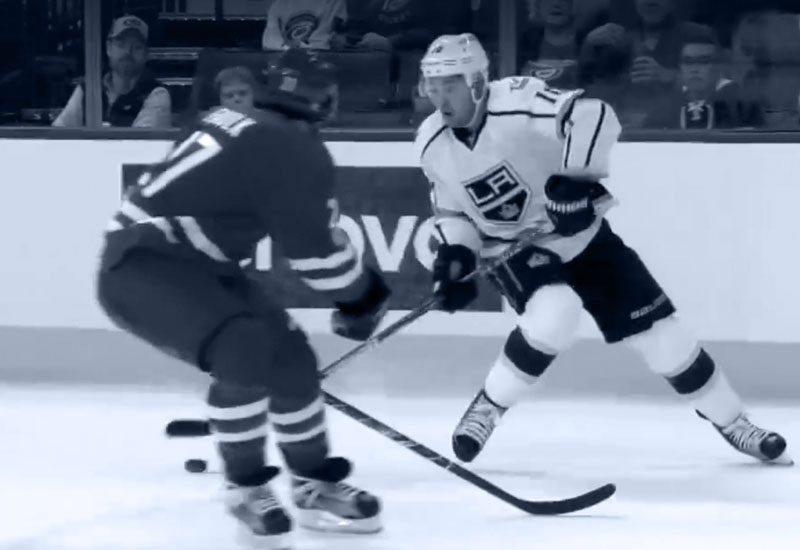 Devin Setoguchi sets up a rebound goal in the third period.

The Kings scored an empty netter to close out the game and send the Canes off on the break to figure out how to turn this losing streak of 5 games around.

Next home game is Tuesday against the Flyers.  This game has a great special going, lower bowl seats are $27 in honor of Canes All Star Justin Faulk.  Be there!

Story by Bob Fennel for CaryCitizen.