Hurricanes Snowed By Avalanche, 2-1 In OT

Cary, NC – After the mandatory week off with no games or practice, the Carolina Hurricanes had a great opportunity to start a five game home stand with a win over the worst team in hockey this season, the Colorado Avalanche, 2-1 in overtime Friday, February 17, 2017 at the PNC Arena.

How Did Skinner Do That?

The new players’ agreement requires teams to have a breather week so the Canes scattered all over, some up to Canada to visit family, some staying back in Raleigh and others hitting sunny spots like Florida or the Bahamas. The Avs were shut out the night before in Buffalo in which they played so badly, they probably felt fortunate to come out losing by just two goals. Last night’s game was their fifth game on their road trip, that included a rough two sets of back-to-back games, having lost all four prior to last night.

Cam Ward was probably one of the Canes that stayed in Raleigh and with his small kids and knowing Cam’s personality, he probably gave his wife a break and spent a lot of time watching, and chasing, his active children as he, and possibly Brock McGinn, was sharp from the onset. Maybe it was the pressure on no wins on the road trip but the Avs certainly had the more aggressive play early on attacking the Canes goal.

Within the first 15 minutes the Avs had seven shots, many requiring tough saves by Ward, while the Canes had three shots with none considered a real scoring chance. McGinn had energy to burn and was the fastest Cane on the ice, looking for someone wearing white to knock along the boards. The Avs scored first when Jarome Ignila entered the Canes end on the left side, Matt Duchene went to the goal, got his stick between Ron Hainsey’s legs and with his left foot made sure Hainsey was going down leaving Tyson Barrie open trailing on the right for an easy shot on a wide open goal. My guess is the refs may have had some time off and still were not back into game form yet.

In the last minute of the period, Lee Stempniak had the puck at the Avs blue line on the right side, saw Jeff Skinner all alone on the left wing so he made a pass to the far boards in front of Skinny. The puck was bouncing and rolling so Skinny waited patiently while the puck settled all the while cocking his stick for a shot from a bad angle. Just as the puck cooperated, Skinny sent a laser between Calvin Pickard’s pads trickling in to tie the game.

Earlier in the period, from almost the same spot he scored, Skinny made an unbelievable hard backhand pass to Teuvo Teravainen that if Teravainen connect for the goal would have made the NHL highlights for the week. Absolutely a beautiful pass and play.

The Canes started the second period with more vigor than the first, quite possible there was some encouraging words from Coach Bill Peters about vacation was over and was time to get back to work. The Canes, along with six other teams, are all vying for the last wild card spot in the east. As a hockey fan, seeing so many teams biting and clawing for a playoff spot is great but is torture for a Canes fan as points mean everything.

The annual road start because of the fair puts the Canes in the hole they have to dig out every year as their road record is horrible. Call it the Caniac factor as their home record is fourth best in the NHL. They have to do better on the road and have to continue their home success as 16 of the remaining 28 games are at home. They still need to win on the road and if we were to play math and stats, they’ll need at least 17 wins to have a chance at the playoffs.

If they’re playing a team in the east, the win needs to be a regulation win as they can’t afford anyone getting the bonus point.  The Canes and Avs each had 12 shots in the second with no blood drawn with the Canes having several good scoring chances. 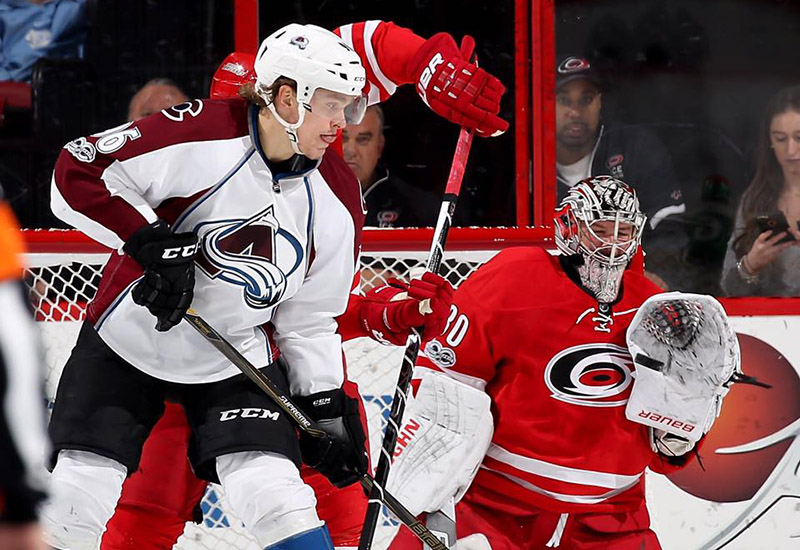 Good chance Coach Rod Brind’Amour made it clear what hustling meant and possibly made an offer to teach someone if their play didn’t pick up further in the third as the Canes came out on fire on the third. Jordan Staal seemed possessed as he’s never been known as a speedster, was out skating opponents to the puck, to the goal and along the boards. When he’s on his game coupled with his size and strength, he’s a force on the ice.

Colorado native Jaccob Slavin and Brett Pesce both had excellent games. Iginla is a future HOF player and is still a great player but Savin had his number all night. With the trade deadline fast approaching, if the Canes make any move, it will probably be a seller and with most teams in desperate need of defense, several will be looking at the Canes.

There were eight scouts from other teams at the game and with the depth the Canes have on D, it will be interesting to see how GM Ron Francis handles the calls. While the draft this year is no where near as strong as the past few years, my guess is, and I find it unfortunate, but Ron Hainsey may be traded for either a forward prospect or second round draft pick.

The Canes started the overtime a man down as Justin Faulk got called for slashing seconds before regulation time expired. The Canes PK unit did a great job and in the waning seconds of ebing man down had a three-on-one for what would have been the story book ending but only thing that happened was a Cane got pushed into the net, certainly looking like an interference call wuld be coming, but one of the refs probably left their whistle at the beach.

With 30 seconds to go, Victor Rask, who has been snake bit in the past dozen games, turned the puck over at the Avs blue line allowing a two-on-one breakaway that resulted in the goal for the Avs lone win on a long road trip.

The Toronto Maple Leafs, having a roster of the future packed with highly talented rookies, shut out the Carolina Hurricanes 4-0 for the first loss this year in the Canes’ black third jersey. Toronto will make the playoffs this year and probably won’t go far but this is a team that will be a powerhouse in the next few years. Like the Penguins about 12-15 years ago, paying the price for being so bad for so long is now paying off with high draft picks including the #1 last year, phenom Auston Matthews.

Both teams are fast but the Leafs’ GM Ron Francis, or any GM for that matter, dreams of big and fast. There’s a good chance the Leafs may be the biggest team in the east. The Canes did have some of the better play early on as they were in the Leafs end about 60 percent of the time.

D-man Klas Dahlbeck had a goal saving play around the seven minute mark as the Leafs had two-on-one with Dahlbeck the lone Cane in the defensive zone. Dahlbeck did his impression of Michael Phelps off the starting block as he dove in between two Leafs not only blocking the pass which would have been a sure goal, but had the puck wedged under him as he went into the corner until someone else in a black sweater came to help out.

Elias Lindholm had a very good night overall even with the Canes being shut out. His passing was sharp including one cross ice pass to Dahlbeck that, if connected for a goal, would have been a highlight reel candidate. Two minutes later, Sebastian Aho had a similar cross ice pass in the reverse direction to Ron Hainsey, unfortunately with the same result: a missed shot. But the cutting in be the defensemen is good to see; anything to generate offense which hasn’t made it back since the bye week.

Late in the period, Lindy was set up in the sweet spot of the slot, sending a hard one time slap shot right at the Leaf logo in the middle of Curtis McElhinney’s chest. 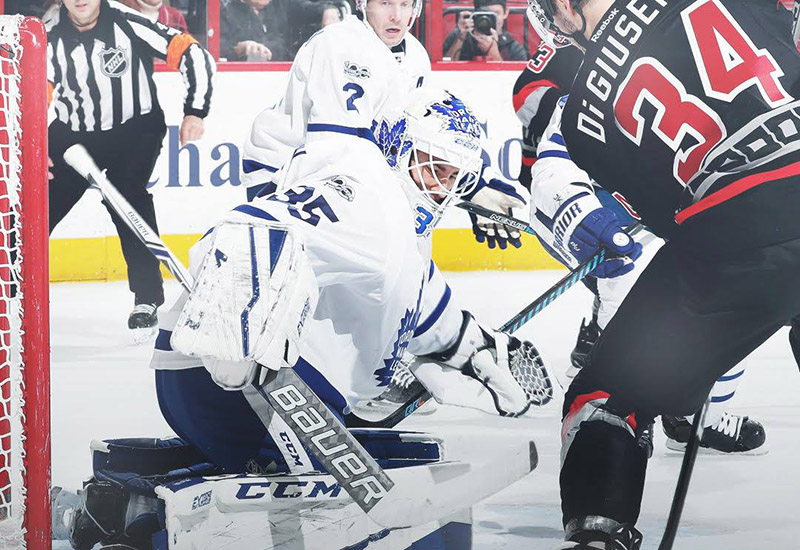 The Leafs scored just over a minute in the second on a beautiful set up by James van Riemsdyk with a lead pass to Connor Brown just out of the reach of Noah Hanifin, where Brown flicked his stick just so enabling the puck to go high glove side past Cam Ward. Just under midway in the period, Matthews scored one of the best goals you’ll see of the season.

With Phil DiGiuseppe all over Matthews from behind, taking him down, Matthews still was able to put both hands on his stick and send the puck five hole on Ward. Knowing its Matthews, if you missed it, watch any NHL video web site and it will be on there. The kid is just 19 but is fast, has unbelievable hands, possibly the quickest shot in the NHL and is beyond the real deal. What a career this player has in front of him.

That goal seemed to take the air out of the Canes. The players on the bench were hanging their heads while the coaches behind them were talking it up. Someone needed to change the course of the game for the Canes. Coach Bill Peters started juggling lines and that wasn’t working. I doubt anyone was looking forward to the in between locker room speech from all the coaches.

Canes Need A Leader On The Ice

The Canes started the third like a team desperate for a win. They were skating stride for stride and maybe a little faster than the Leafs. They won the battle along the boards but couldn’t get off many decent shots and if they did, there was no one crashing the net or having any presence in front of the crease. The Canes and Caniacs knew if they scored a goal early, it would be a whole new game but that never happened.

The back breaker occurred at 6:10 when Jake Gardiner sent a floater in from the left point that made it through the maze of players in front of Ward that took the wind out of the Canes sail. The Canes offense shriveled up after that and it was just a matter of how many the Leafs would score. Two minutes later, it was déjà vu all over again for Brown as he scored his second goal of the night on an identical play he did in the second.

It’s not that Ward was that bad – three great shots, one lucky one – but with the game over, Peters made a good move by putting Eddie Lack in to get some real game exposure. Until the Canes are officially out of the playoff race, it’s doubtful Lack may be in goal other than in a back to back situation. Ugly and disappointing is the only thing that can be said of last night’s performance.

It doesn’t get any easier because the defending Stanley Cup champions, the Penguins, will be at the PNC Arena Tuesday, February 21, 2017. Be there.

The Drone Flyer’s Guide to Cary