Cary, NC – It wasn’t the prettiest or most physical game you’ll ever see but the effort was present on some players while lacking for others.

The day after coach Bill Peters blasted the play of one of his players, no telling what the after-game lecture would include. The trade deadline was this past Wednesday and the Canes traded away Ron Hainsey and Viktor Stalberg. Hainsey was a vocal leader in the locker room as well as on the ice. Every young defenseman on the Canes all said Hainsey was like an on ice coach, always helping and teaching these young studs what they did right and wrong on a particular play.

Arizona is one of the few teams behind the Canes and were on their last game of a totally unsuccessful road trip, with having played, and lost, in Buffalo the night before, this was a game all but in the ‘W’ column for the Canes. The Canes started out with the more aggressive play; Klas Dahlbeck carried the puck in the neutral zone then saw Joakim Nordstrom just about to cross the blue line so he sent a hard bank pass off the far corner. Nordy had the speed to get the puck, turned and made a pass to the tape of Derek Ryan who sent a quick one timer only to have goalie Louis Domingue make a chest save. Great looking play which hopefully the Canes would ignite more of the same.

A few minutes later, Elias Lindholm had the puck just inside the far faceoff circle, got by one defender, then another, faked shooting right that had Domingue hugging the left post, did a toe drag to his left only to have the puck roll off his stick with 20 of the 24 square feet of the goal being wide open. That goes in and who knows, the whole dynamics of te game changes.

Shane Doan, a class player who still has the wheels but may be in his last year playing, brought the puck up the left side into the Canes end, did a back hand saucer pass over to Cary resident Bill Dvorak’s favorite non-Cane player, Christian Dvorak, for a wrister past Cam Ward for a Coyote 1-0 lead. The bench coaches were about to explode over that goal as one rookie totally ignored covering Dvorak which is why he was open.

Just six minutes later it was former Cane Radim Vrbata starting the same play, coming down the left side then passing over to Alex Goligoski who just out skated Victor Rask for a tip in. With less than a minute to go, Jay McClement, playing in his 900th NHL game, won a faceoff sending the puck back to Jaccob Slavin. Slavin settled the puck and waited just enough time to allow teammates to get into position then sent a 50-50 wrister towards the goal. Lee Stempniak swatted the puck from 14 feet out, deflecting it just so sending it over the left shoulder to cut the lead in half. 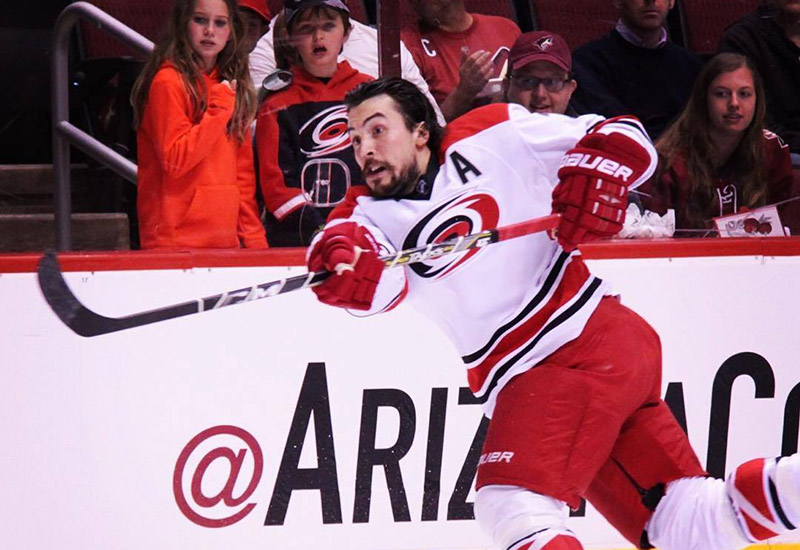 Staal’s Ties It At Two

Despite the goals in the first, Ward did look sharp making several tough saves look routine. He continued that sharpness into the third, stopping three quick Coyotes’ rushes when they had numbers on each play. With the puck in the Arizona end for the second time of the period, Di Giuseppe sent the puck in front of the goal towards the corner, Teuvo Teravainen grabbed the puck, sending a sloppy but effective pass into the low slot.

If Jordan Staal seemed like he had arms made of rubber as he stretched what seemed like nine feet to get the puck then slammed it home to tie the game. That early goal in the second certainly woke up the Caniacs as the arena started to get loud. The rest of the period had some end to end rushes by both team with shots right at the logos on both goalies’ sweaters. The jump and spunk by both teams was missing which every player knew and was probably dreading the locker room in between periods.

Both coaches must have made the same speeches as both teams had an extra step in the third. Bodies were being banged against the boards, Di Giuseppe was a wrecking ball, shifts were shorter as the word was skate all out on every shift. Midway in the period, Doan sent the puck to the far corner, Ryan Murphy got the puck, sending it back high behind the net.

Both Dahlbeck and Doan were battling for the puck with Doan winning that battle sending it to Jordan Martinook all alone skating hard down Broadway for an easier slap-in to break the tie.

Later in the period, Vrbata, who is a very talented player, came in on Ward all alone. Vrbata head faked left then from about 12 feet out took a hard shot right that Ward made one of his best saves all season and should be on the NHL highlight saves of the week. Outstanding save that a few of us looked over to Peters to see if he was looking at Lack on the bench saying anything like “see what a save looks like.” The Canes just couldn’t penetrate the Coyotes defense very well which was very disappointing. Their D can’t match up to the Canes D on paper but they did on the ice where it counts.

Doan added an empty netter giving him three points on the night which was well deserved and he earned First Star of the game. The Canes have lost just three games when scoring three or more goals. Two goals in this league just aren’t enough, so whatever it takes, they need scoring. This was the front end of a home-and-home game against the Coyotes and having games like this nearly 2300 miles apart is an NHL record for a regular season.

Next home game is against the Rangers on Thursday, March 9, 2017. Be There but wear red, not blue! 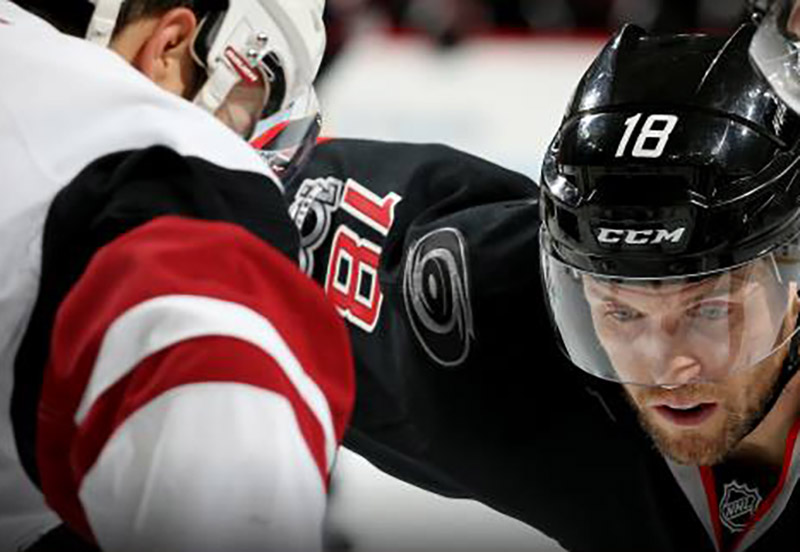