Cary, NC – For Cary’s annual African-American Celebration, people gathered to recognize the life and legacy of North Carolina journalist Cash Michaels. And to go with the two-day celebration, a panel of experts discussed the changing state of journalism in the United States today.

What is Fake News

The tribute to Cash Michaels included celebrating his work as a documentary filmmaker, his work for publications such as the Winston-Salem Chronicle, the Carolina Peacemaker, the Wilmington Journal and more. Several prominent figures spoke about Michaels and his work, including Cary Mayor Pro Tem Ed Yerha who started off with a proclamation for the 22nd annual African-American Celebration. 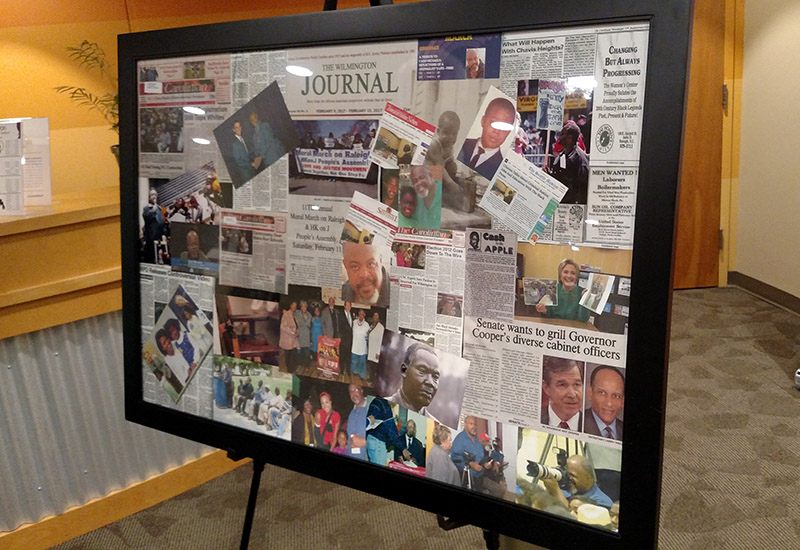 A collage of Cash Michaels’ work

But on Friday, March 3, 2017, the celebration included a panel about the state of reporting now and how it intersects with questions of social activism. The panel, titled “Stay Strong: Journalism and Social Activism Together,” was moderated by the host of WRAL’s “NC Spin” Tom Campbell. The panel included:

To kick off the panel, Kilimanjaro said journalism and reporting is important now more than ever in an era of “fake news.”

“Regardless of what your party is, you have to hold to asking the right questions,” Kilimanjaro said. “It doesn’t matter what my position is; I need the put out a story that is connected to the facts.”

“Fake news” is a relatively new term to describe news outlets, mostly online, that publish stories not connected to any facts or sources or information. It should be noted that there are outlets who poorly report on a story or end up getting facts wrong that are not necessarily “fake news” since they are not fabricating information.

With the influx of many outlets, which makes it easier to propagate “fake news,” Ross said all voices needed to be kept, referencing her ACLU background to protect free speech.

“But at the same time, you need a way to figure out who is telling the truth,” Ross said.

McSurely and Thomas both talked about the importance journalism has in society and drew on their experience in activism and non-profits. Thomas said reading or seeing the news and learning about what is going on in a narrative format helps decision-makers understand the truth. McSurely, who will be the subject of Michaels’ next documentary, said reporters can combat mendacity.

“Racism is the recycling of mendacity and right now, we are dealing with what I call ‘warmed-over Helms,'” McSurely said. “But journalism is the opposite of mendacity. It’s the truth. And journalism has to stand up.”

And Kilimanjaro said there are definite changes with not only how reporters are received by the public but how they gather their stories.

Discussions about “fake news” are more recent but all panelists, and Campbell, said other debates about journalism and the news media have been going on for much longer. Specifically, Campbell asked the panel about the intermixing of opinion with reporting and the trend of reporters giving their personal views instead of the straight facts.

“When you have an owner of a newspaper who wants their view out their, it goes out there,” Ross said. “The problem is when you cannot see the difference.”

Ross said this goes back to the days of Thomas Jefferson and John Adams owning newspapers and challenged people to look and see both sides of any story.

With television news becoming the main driver of discussions now instead of newspapers, Kilimanjaro said she saw this trend starting around the 2008 election.

“TV panels would bring on people for their perspective and it would start only being partisans,” Kilimanjaro said.

McSurely said there is another form of bias in the news media that is not partisan or ideological: people only want flashy stories.

“We always hear TV people saying we need to sex it up and make it more exciting,” McSurely said. “They say we need to find a way to ‘jazz up’ reality or they won’t run it.”

Reliable journalism does still exist, Ross said, but she finds it in small town stations and newspapers who get closest to a story.

“But big name TV would want to come in and get their clip and leave,” Ross said. “You only gain trust through human connections.”

Campbell also brought up the idea of how social activism gets combined with journalism and makes reporters be accused of partisanship or bias. Kilimanjaro said the two can easily get confused by observers.

“We owe an obligation to our communities. If that is seen as activism, it shouldn’t because we are simply telling those stories,” Kilimanjaro said.

For someone working in non-profits, Thomas said without information and stories, activists would have less of an idea of how to proceed.

“It’s the journalist who lights that candle and then people can build upon it,” Thomas said.

For new and young reporters, the panelists had one very clear piece of advice: have a thick skin and ask a lot of questions.

The event was presented by the Town of Cary and the Ujima Group, Inc. 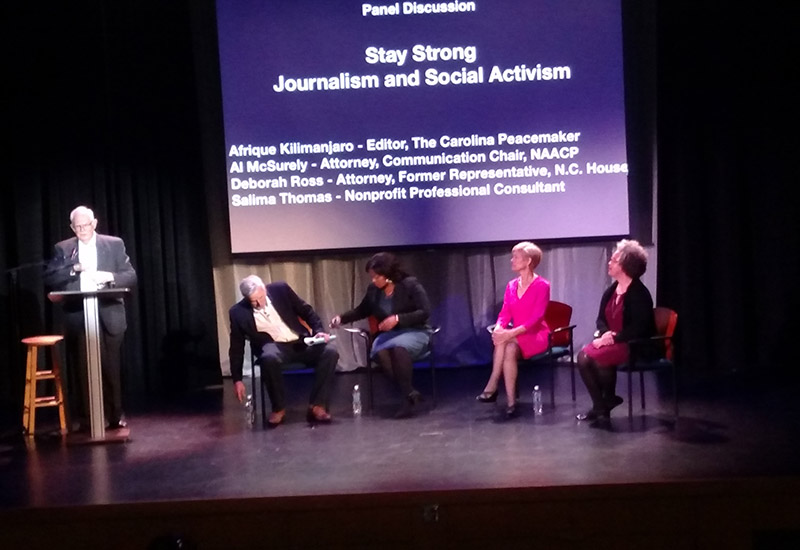