Cary, NC – The Carolina Hurricanes extended their point streak to 11 games with that mysterious extra point in the overtime loss to the Detroit Red Wings 4-3, moving them to within four points of the Wild Card spot in the playoffs. The Canes continue to cheat the odds and pundits of where they would be this season, especially after being sellers at the trade deadline.

Monday’s game was the make-up game for the Monday, December 19, 2016 game, postponed due to a broken line that keeps the ice at its best ice conditions between 17- 20 degrees Fahrenheit. The Hurricanes had a great attitude about “the melt down” and vowed to Caniacs not to have another melt down by treating all Caniacs to snow cones before the game. The Red Wings, still with one of the classiest jerseys in all of sports, were eliminated from the playoffs a few games back but they do have some impressive young talent.

The game started matching speed against speed. The Canes defense is young and fast and probably one of the few teams capable of match stride for stride with the Wings fast forwards. The Canes dominated the neutral zone early which led to several scoring chances on the Wings goal. Lee Stempniak brought the puck into the Wings end, passed to Jaccob Slavin on the left point, Slavin made a sharp cross ice pass to Jeff Skinner camped out in the the far faceoff circle.

Skinny grabbed the pass, set himself and left go a medium speed slap shot that bounced off a defender, trickling between Petr Mrazek’s pads for the early lead. Skinner has been on a tear lately and wants as much as every other player to get into the playoffs. Slavin is having a great year on both sides of the puck and showed his defensive prowess late in the period as he was the lone defender on a 2-on-1 but timed his slide to perfection as he broke up a play that had goal written all over it.

Elias Lindholm also has quietly had a very good season. His 10 game scoring streak ended with this game but his contributions off the puck go unsung. With the Canes down a man, Lindy’s defense both on and off the puck is like watching Rod Brind’Amour 10-12 years ago. 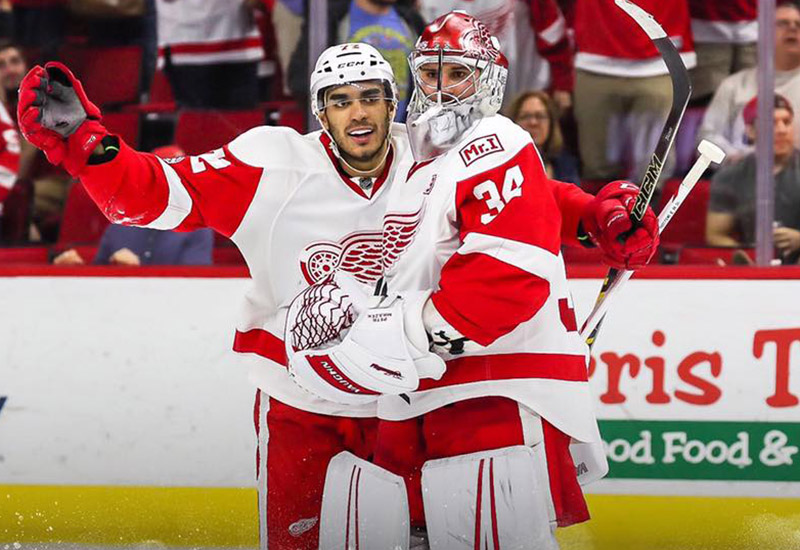 The second period started like the first ended: the Canes were dominating in the faceoff circle which led to shots in the Wings end. Then there was about a 9-minute nap by the team in black. The Canes appeared to be taking Detroit for granted, maybe because whatever they did up to that point was working for them but in most pro sports, and maybe more pronounced in hockey, careless errors can prove fatal.

Twice within a little over a minute, Anthony Mantha burned the Canes. Teuvo Teravainen was circling in the Wings end then the puck rolled off his stick at the blue line. Mantha jumped on the puck, turned on his jets and sent a high wrist shot over Eddie Lack’s right shoulder from about 20 feet out. A minute later, Skinny was trying to kill time at the Wings blue line as both teams were making a change. He’s usually able to get around one defender, frequently two defenders but this time he couldn’t get by all three with the puck hitting a leg. Mantha jumped over the boards caught a pass and went in for his second breakaway goal in 70 seconds.

In the last minute of the period, Derek Ryan made a crisp pass to Slavin up high. Slavin passed over to Justin Faulk on the right point where he caught the puck then made an ever-so-sweet move to get around a defender sending a wrister in with Skinny and Stempniak creating traffic in front of the crease.

It wasn’t evident both teams were out of a playoff spot based on the way they were playing. Brock McGinn had an outstanding game and brought that physicality that he seems to enjoy and is fun to watch. On one play, he shouldered a Red Wing off the puck, gained possession and made a pass that led to a scoring chance. Klas Dahlbeck was called for interference that unless you were watching him or Justin Abdelkader rather than the puck, you missed a solid but good penalty.

That penalty led to a Wings powerplay goal by Tomas Tatar who was the lone skater on the left side of the ice and picked his corner to put the Wings up 3-2. With Lack pulled for the extra skater, the Canes kept the puck in the O-zone, with shot after shot on Mrazek. Once again in the last minute of the period, Noah Hanifin passed over to Faulk who sent a wrister in to tie the game bringing loud cheers from the Caniacs.

In overtime, Sebastian Aho got a lead pass just as he was crossing the Wings blue line, went down the middle then made a button hook for a pretty pass to Teravainen who just couldn’t get the shot over Mrazek’s pads. On the next shift, Skinny sent a hard slap shot off Mrazek’s pads that bounced out to center ice. Andreas Anthansiou picked up the puck over the Canes blue line went wide, turning to the net the shuffled the puck past Lack, kneeing Lack sending him backwards into the net where he lay motionless for several minutes. Lack was taken off on a stretcher with both teams mulling on the ice to make sure Lack was OK and to show their support. Lack was taken to the hospital to undergo the routine tests especially since he had a fairly bad concussion earlier in the year. Canes do get a point bringing them within four points of the final wild card spot. 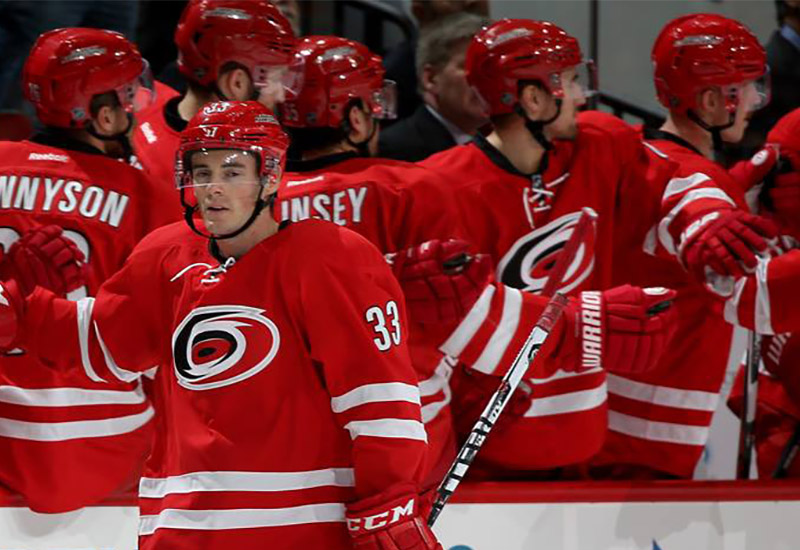