Cary, NC – The latest Cary Town Council meeting saw many items pass through, including new decisions about water in Cary, several annexations and the retirement of a long-time Cary staff member.

As an update to the Town of Cary’s water agreement with the Town of Apex, the Cary Town Council voted to keep the agreement in line with the current plans for the town and agreements with other local and county governments. The share of the water is stll kept at a 77/23 deal, with Cary getting the 77 percent.

Jeff Adkins with Cary’s Water Resource Department also said an expansion for the current water treatment plant is currently underway, one that will be able to process 56 million gallons per day.

On a similar topic, Town Council voted on a bid award for a new elevated water tank. Previous bids had been rejected as Cary reshuffled its plans, which now call for a two million gallon tank on Kilmayne Drive, close to the Maynard tank at Cary High School. Dave Hallgren with the Water Resources Department said there are also plans to rehabilitate the Maynard tank, currently the oldest standing tank in Cary, but that is not part of the bid decision the town was voting on.

The Kilmayne tank will look different than the others because it is a “composite” tank that will sit on a concrete column and therefore not all of it will be painted. Hallgren said this design is becoming increasingly popular because of the cost savings in paint. Town Council voted unanimously to award the bid, with the project costing around $4.86 million.

Other discussion items included new naming rights for the soccer stadium at WakeMed Soccer Park. When Steve Malik and the North Carolina FC bought the Western New York Flash to become the NC Courage, the area’s new professional women’s soccer team, they made an agreement with the previous owners, the Sahlen family. As part of the deal, the stadium would be named after them and carry the logo of the family’s meat company, Sahlen Packing Company, Inc., which has been around since 1869 (or two years longer than Cary as Councilmember Jack Smith noted).

Town Council also voted to waive the waiting period for a rezoning request because the situation had changed significantly due to the adoption of the Cary Community Plan. Council voted unanimously but pointed out that this only allows the developer to bring the rezoning request to them and does not guarantee they will get what they are asking for, with Councilmember Don Frantz saying the plan could better fit the density conditions they are asking for.

This Town Council meeting had six different public hearings, only two of which saw any significant discussion. One of those was a rezoning for 1.03 acres along Holly Springs Road to bring in new townhomes. Some councilmembers brought up questions about how many townhomes and how dense it would be, with Mayor Harold Weinbrecht noting his concerns about aesthetics and Cary housing becoming “ugly.”

But with the proximity to the fork on Tryon Road and other road improvements that would be needed adjacent to the property, Smith said he was skeptical.

“This is a classic case of coming in bits and piece,” Smith said. “We could have a mess here.” 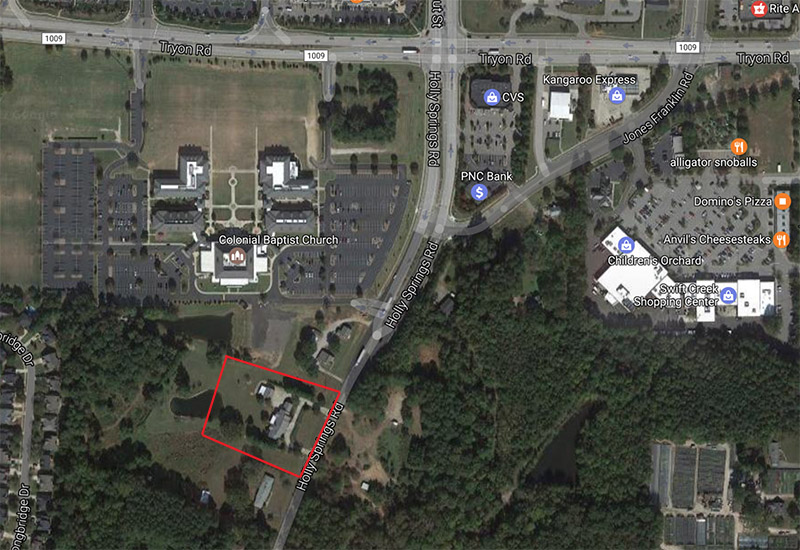 The approximate location of the Holly Spring Road rezoning request

Frantz, on the other hand, said the Town Council had approved larger tracts of land with more potential for problems in the past.

“One acre is not making or breaking this area,” Frantz said.

The rezoning went to the Planning and Zoning Board.

The other Public Hearing that saw a lot of input was the budgeting for the Community Development Block Grant. This is a yearly annual grant that comes from the federal Department of Housing and Urban Development to use on local projects. John Donachie with the town’s Planning Department told the Town Council that the new administration has given them no information on how much of a grant they will get this year. For now, the department is waiting to hear back from the federal government and if they do not hear by August, they will budget for what the grant was last year.

Several speakers from local non-profits asked for consideration in any grant funding, with the White Oak Foundation, Dorcas Ministries, Habitat for Humanity, the Carying Place, Rebuilding Together and the Tammy Lynn Center speaking. Also, a representative for EverGreen Construction spoke briefly about the need for affordable senior housing.

Other public hearings included three annexations, two of which Town Council voted unanimously to approve on Reedy Creek Road and Green Level Church Road, and one rezoning request for 2.55 acres along Wackena Road. The only item that had a speaker was the rezoning, where the developer said the plan is for seven residential lots on the property. The rezoning went to the Planning and Zoning Board.

While it was not technically part of Public Speaks Out, Weinbrecht began the meeting with a statement on the repeal of HB2. In the past, Weinbrecht has been personally outspoken against the state measure and said he was happy about the repeal and the bridging of “what seemed like a vast, insurmountable divide.” Weinbrecht said it made him optimistic for political cooperation in the future.

There were four speakers at the Town Council’s Public Speaks Out segment. One was a local resident who had addressed Town Council several times over the year and has formed the Northwest Cary Community Connection to work with people in the west part of Cary to connect and work together.

Another speaker was the CFO for Cary Players, who thanked the Town of Cary for their support. His presentation was so theatrical that at the end, several staff and councilmembers applauded briefly before realizing they were breaking their own conduct rules for Town Council meetings.

Finally, two speakers who lived near the intersection of Cary Parkway and Westhigh Street talked about frequent flooding their homes had. Weinbrecht informed them on how Town Staff could get in touch with them and Councilmember Jennifer Robinson suggested they go to the flooding and stormwater section on the Town of Cary website, which as been updated as stormwater has come up in several past Town Council meetings.

The Town Council meeting began with the ratification of the Cary Community Plan, which passed several weeks earlier. But much of the ratification was used to commemorate the work of Planning Director Jeff Ulma, who had his retirement ceremony earlier that day.

Ulma worked for the Town of Cary for 21 years and among the work he did during his time in the Planning Department was creating the Chatham Use Plan, Cary’s land development ordinances, the Town Center Area Plan and the Cary Community Plan.