Monday I called council members to hear of any questions or concerns about Thursday’s upcoming agenda. I was able to contact all council members and there were very few minor questions. Later in the day I met with staff to go over the agenda. Are meeting was very short and I anticipated the council meeting on Thursday would be less than an hour.

Later in the day I, along with Mayor Pro-Tem Yerha, met with the town manager for my weekly one-on-one. This week we spent most of our time talking about legislative action that is harming Cary or costing Cary money. Here are some of the legislative items:

If any of these bother you PLEASE contact your local legislators. You can find them at http://www.ncleg.net/gascripts/counties/counties.pl?county=Wake. 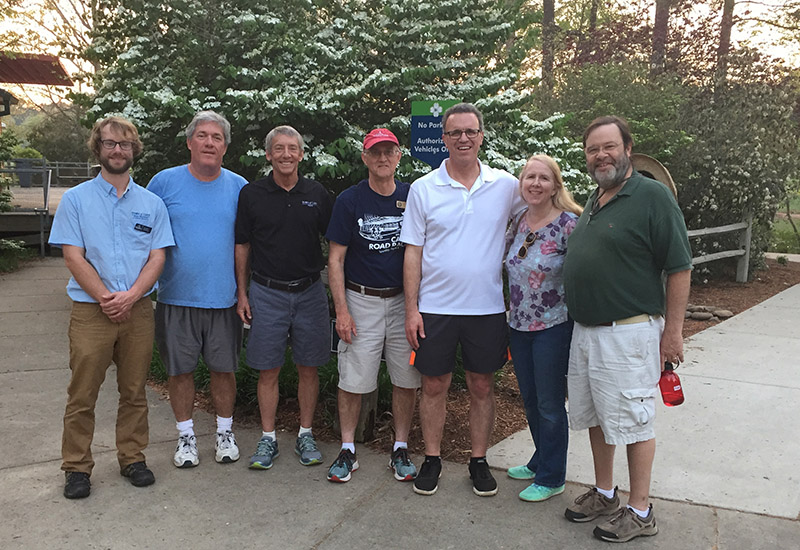 Tuesday I participated in what I hope will be a regular event, “Yak and Trak”. There were only a small number of people who participated but I believe that is because it was spring break and a week night. The first part of the event was a kayak and canoe trek around Bond Lake. It was a beautiful day and we enjoyed all the wildlife and scenery. 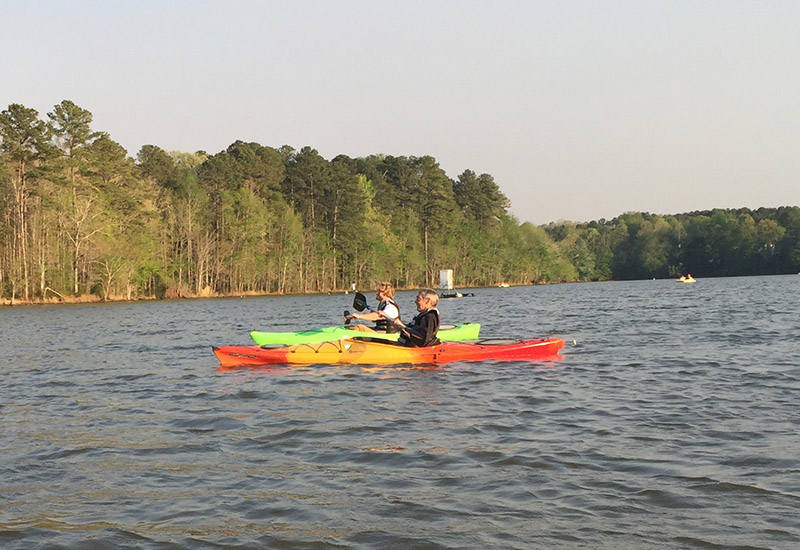 Three of us were in kayaks and two were in canoes. Afterwards we walked part of the Black Creek greenway and trails around Bond Park. My Fitbit measured a little over one and a half miles. It was fun doing the exercise and talking with folks about various topics. I hope you consider joining me in the future. 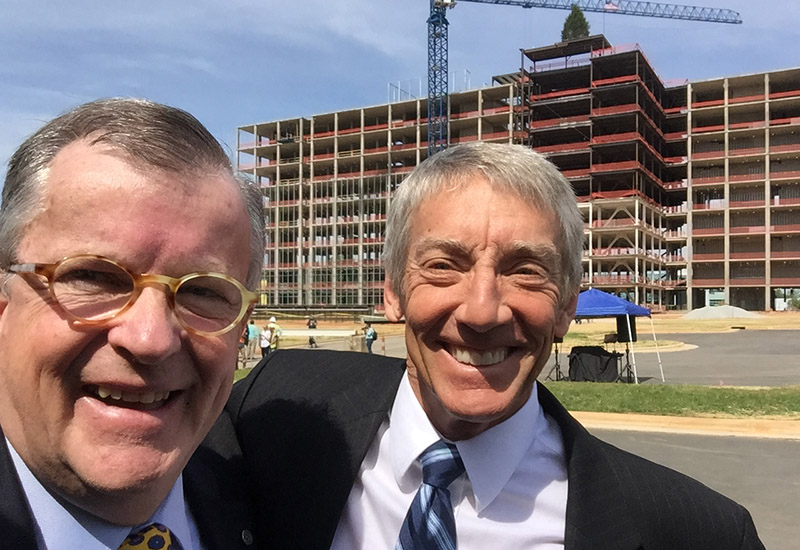 Wednesday I participated in the “topping off” ceremony at SAS. This is a celebration of the last beam being put in place. I was able to sign the beam and have my picture made in front of it before it was hoisted in place. It was a great day for SAS and for Cary with over 200 people in attendance. It will be the tallest building in Cary once completed. This building also signals the health of Cary’s largest employer, SAS, and the health of Cary. We are so fortunate to have such a great company like SAS in Cary providing high paying professional jobs to our citizens and citizens from neighboring municipalities. They are one of the reasons why Cary is such a great place to live, work, and play. SAS’s success is our success and we look forward to many more years of success and our partnership with them. 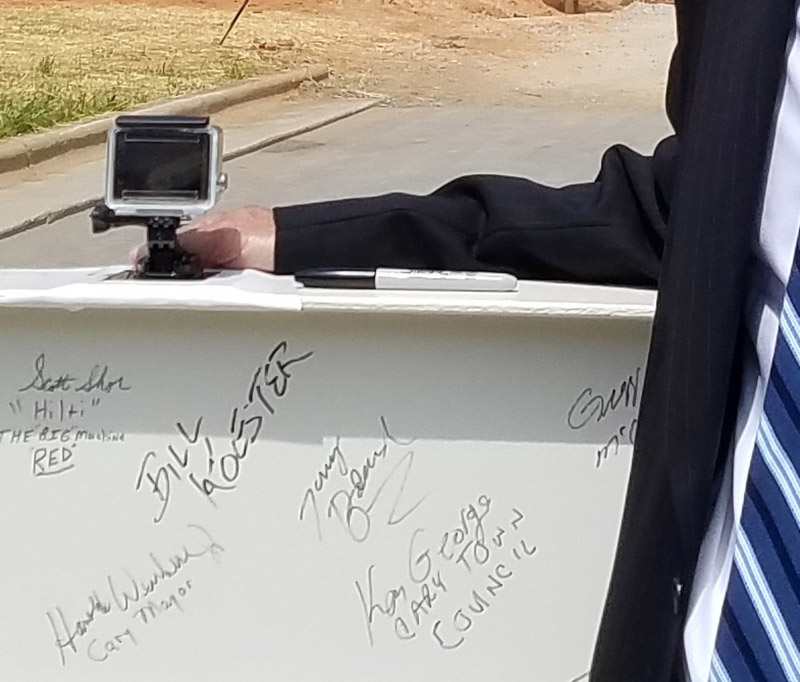 Wednesday I joined Mayor Pro-Tem Yerha in a meeting with the owner of the Triangle Aquatic Center known as TAC. He shared his plans for the next 10 years which included three phases of expansion. Phase 1 would include parking to replace mall parking. Phase 2 would include additions to the existing TAC structure. Phase 3 would include a new facility with new pools. He said that once these three phases are completed TAC should be the largest swim facility in the country. We look forward to working with TAC to resolve issues to help make their vision a reality. Our meeting lasted about an hour.

Thursday I joined several council members at the Page-Walker to visit with exchange students from our sister city in Le Touquet. They are here for a few weeks working in various restaurants in the area. I will be traveling to Paris and Le Touquet on April 23rd. 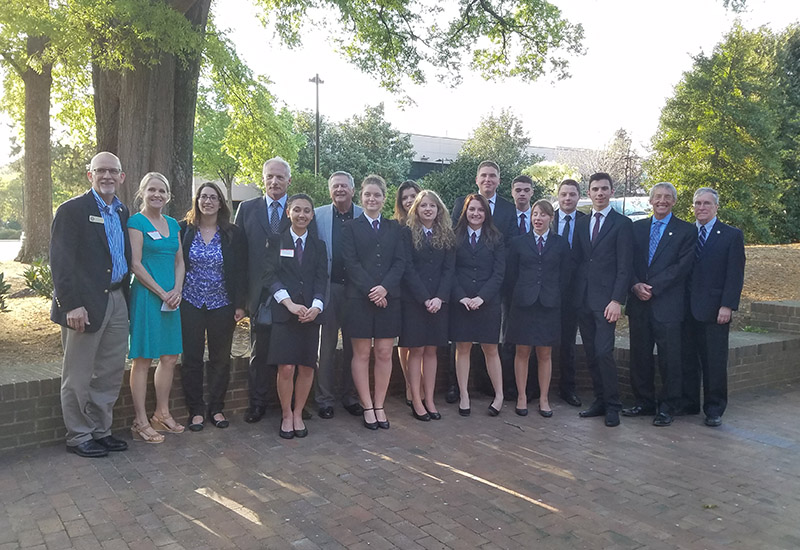 Thursday the council held its first regularly scheduled meeting of the month. There were 4 consent agenda items, 1 public hearing, and 2 discussion items. Our public hearing was about the proposed development at two corners of Cary Parkway and Evans Road. Several proposals have come to the council over the last decade and have been withdrawn or denied. This proposal would have a retirement facility next to the neighborhood and apartments across the street. Most of the speakers did not have an issue with the retirement community but council members and speakers had concerns about the apartments. This will now go to the Planning and Zoning board boar their recommendation. Council held a brief discussion on the 2017 fiscal year road improvements before unanimously approving. In the final discussion item council decided to invite people to make wishes and throw money in the new downtown fountain. Money collected from the fountain will be used for our Parks and Recreation youth scholarship fund.

Due to a light agenda for the Council meeting on April 27, staff is proposing to move the April 25 work session to the 27th immediately after the regular meeting. As a sneak peak, the April work session will include a Legislative update and discussion around the Downtown Park. Your calendars have been updated accordingly.

GPS Location Services have been added to all police portable radios. This service increases officer safety by allowing the Emergency Communications Center (ECC) and police staff to visually see field unit locations in the Computer Aided Dispatch (CAD) system when officers are outside their vehicles. Cary is the first agency in North Carolina to implement this technology.

Lana and I continue to closely track the bills filled this session. We have updated our website with a listing of legislation of concern for our Town. This list includes the impact fee bill, municipal elections in even-numbered years, and special separation allowance for fire fighters.

The most common Cary-specific comments included general enthusiasm over existing service, expanding service and adding a park-and-ride facility in West Cary, and requests for routes on NC-55, Cary Parkway and Weston Parkway. Expanding the GoCary service area to include new routes will be part of future Work Plans.

It is anticipated that the TPAC will recommend a final FY18 Work Plan for CAMPO and GoTriangle Executive Board approval at their April 25 TPAC meeting.

Google recently proposed using a micro trenching (MT) installation method for their fiber network. MT involves cutting a four-inch deep trench where the asphalt meets the curb, installing the fiber, then back-filling the cut with a sealant material. MT significantly increases fiber installation speed and eliminates the need to dig up yards during installation; both items mitigate installation inconveniences on citizens.  Additionally, MT mitigates the chance of utility strikes. MT was used during Google Fiber installation in Austin, TX.

Last Friday, over 80 bicycle and pedestrian advocates, planners and designers gathered at the Cary Arts Center to talk about recent improvements, plans, experiences, and ideas for improving and increasing bicycling and walking in our Triangle community.

Thanks to Council member Lori Bush for providing the welcome and for setting a great example by riding her Elf to the workshop! After a morning of great speakers and community updates, several attendees participated in a bicycle tour on the Black Creek Greenway and a walking tour of downtown.

This week, Cary and Apex jointly filed a response in EMC and DEQ’s appeal of the Administrative Law Judge’s decision in the Fayetteville IBT challenge. Please contact Chris Simpson if you have additional questions.

The Project PHOENIX team hosted the first Egg Hunt this week. Children of Chatham Forest were invited to decorate bags before being released to search for the prize-filled eggs. Fire fighters were on hand to make the day even more special. Approximately 35 residents were able to participate. Several other Egg Hunts are planned at various PHOENIX communities throughout the month.

This week we were contacted by the Wake County Public School System and asked that they be removed from our cable programming while they work on technical improvements. They will notify us again when they are ready to return to our channel’s schedule. In the meantime, citizens can access WCPSS information via their social media channels.

Emails from staff this week included the following update on street projects:

Currently we are in the process of acquiring right-of-way for the remainder intersections, which include the following…

Construction on these intersections should start in the Fall of 2017.

Well, that is all for this week. My next post will be on Sunday, April 23rd.  Although I have Facebook and Twitter accounts those are not the best means of communications with me. Please send all Town of Cary questions or comments to Harold.Weinbrecht@townofcary.org and email personal comments to augustanat@mindspring.com.