Cary, NC – In talking about the history of Cary and its residents, you can often learn a lot just from talking about someone’s personal experiences growing up. So, in this installment of History for Breakfast at Famous Toastery, we talked with Sallie Jones and her niece Linda Hall about some of their experiences in Cary in the 1950s and 1960s.

You can also listen to the full conversation on Soundcloud.

The Jones family has been in Cary since the late 19th Century and Jones herself has an interesting life story, working as a teacher for almost 40 years. And Jones studied everywhere from St. Augustine College to the Sorbonne in Paris, France.

When Jones was growing up, she said Cary’s population was around 1,500. It was a time when everyone knew one another, or at least knew where everyone lived. And she played with a wide variety of friends but because of segregation, they could not always play in public.

“We knew when we went out, we’d have to go our separate ways,” Jones said. “I could stand in my front yard, even today, and look at Cary High, but we couldn’t go there.”

Hall grew up during the 1950s and initially went to West Cary but was forced to change schools due to desegregation.

“I didn’t like it, but we had to do it. You had no choice,” Hall said. “Once you got there, you learned to just get your education and not worry about all the other stuff that was going on.”

While Hall said she was not initially happy with the situation with her school, she said she learned to make friends and make the best of things, while adding that her father protected her from uglier forms of racism. But Jones also said integration of schools in the area took a long time after the Brown v Board of Education Supreme Court case in 1954.

“It still took them from 1954 to 1968 to actually enforce integration in full force,” Jones said.

On the subject of segregated schools, Jones also told the story of a black elementary school that burned down in 1937, though Jones said many people do not talk about the full story.

“It was arson. Everybody knows it but no one mentions it,” Jones said. “It was behind the white high school. They said they could not find enough land to build another school for colored children. That’s what they said back then: ‘colored.'”

But Jones’ mother and uncle ended up donating some of their land to Wake County to build a new elementary school for black children, which is now Kingswood Elementary School.

As Jones got older, she said there was admiration for national civil rights leaders such as Martin Luther King Jr. and every Friday she would go to see the weekly marches. But she was careful not to participate in the marches themselves.

“If your picture appeared in the paper, you could be fired,” Jones said. “You weren’t making that much money and there weren’t that many jobs available anyway. So even though you support everything, you had to kind of lay low.”

At that time, protestors and marchers would be arrested and Roy Wilkins with the NAACP would, as Jones put it, bail them out as fast as they could be put in jail. But then the strategy changed some and they decided not to bail people out, clogging the jails and putting a strain on the jail’s food supply.

“Instead of locking them up, they started begging them to go home,” Jones said. 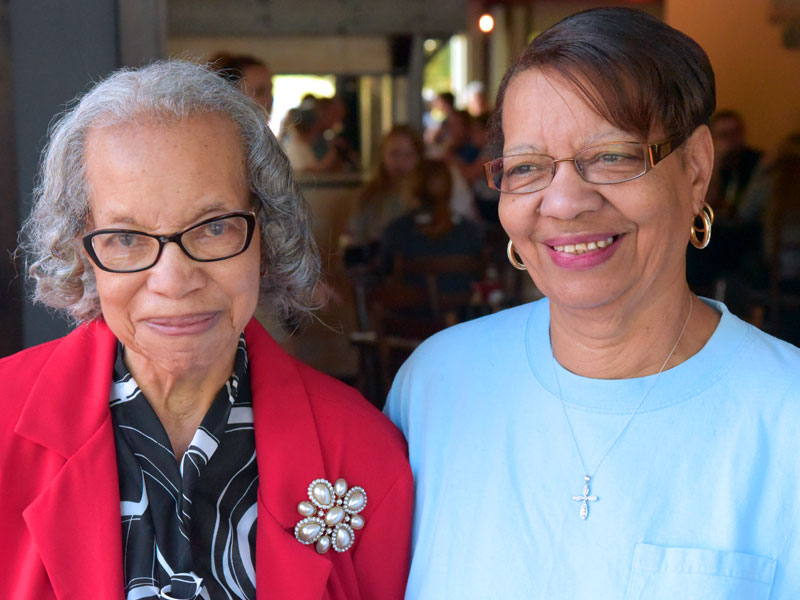 L->R Sallie Jones and Linda Hall at The Famous Toastery in Waverly Place.

Listen to our whole History for Breakfast conversation with Sallie Jones and Linda Hall:

Story by Michael Papich. Photos by Hal Goodtree. History for Breakfast is sponsored by Famous Toastery in Waverly Place.