Cary, NC – A recent project by the Americans For the Arts has found that non-profit arts and cultural groups contribute close to $17 million dollars to Cary’s local economy.

Randy Cohen, vice president of research policy for Americans in The Arts, presented “Arts & Economic Prosperity 5” at the Umstead Hotel and Spa in Cary. Cohen explained that they seek to educate the public and legislative bodies about how big an impact arts events and cultural organizations can have both on a local and national level.

Americans for the Arts started conducting the surveys in 1994 and every five years thereafter in an effort to talk about the arts differently. Instead of talking about how governments fund the arts with little or no return on investment, the study shows that art institutions create jobs, volunteer opportunities and economic impact in their communities.

Of the 126 Wake County non-profit groups that responded to the survey, 37 were located in Cary. In addition, 1358 individual patron surveys were collected, of which more than 480 were from Cary. The survey measured spending by these organizations, calculated volunteer hours and their value and surveyed patrons on their spending patterns. 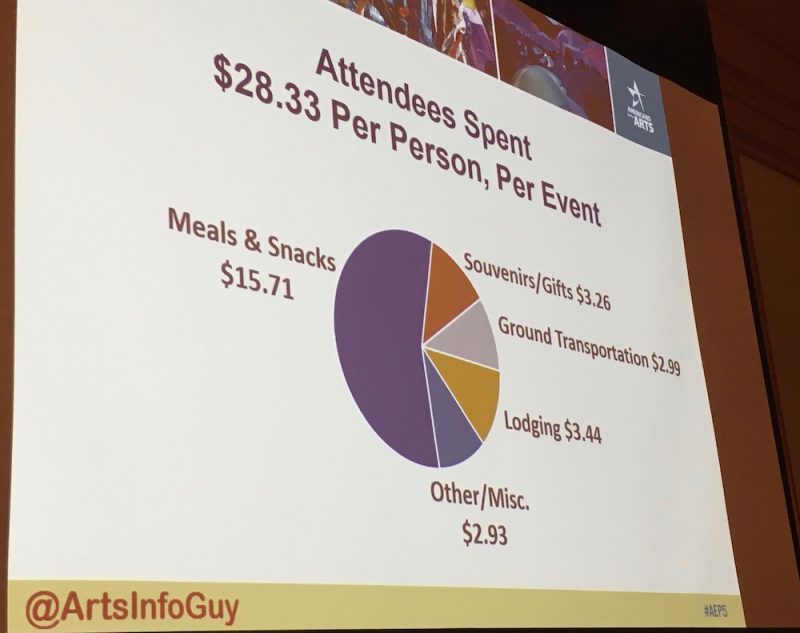 Slide from presentation by Americans for the Arts

Art as a Business

Findings revealed that North Carolina came in fourth nationally in revenue with $2.1 Billion, Wake County calculated more than $557 million and Cary raked in almost $17 million. Of that money, it was calculated that patrons spend on average $28.30 per person above the cost of admission. That can include meals, overnight stays, parking, souvenirs and travel. This spending supports jobs and growth right here in Wake County and Cary. The survey also revealed that 28 percent of all attendees are from outside the county. 14 percent of the expenditures were for lodging.

Typically, government grants support non-profit groups and these grants are seen as an expense by legislators and the federal government. In fact in Cary, $1 representing each Cary resident is put in a fund where Cary-based cultural organizations can apply for grants. In Raleigh, $5 per resident is awarded.

Showing the economic gains realized by these expenditures is important to understanding the arts as a business. Raleigh’s Mayor Pro Tem Kay Crowder said Raleigh’s $5 per capita spending has allowed them to raise $1.8 million to create special places like Dix Park, Chavis Park, Moore Square to name a few, “as well as 18,000 jobs through the arts.”

Growth in All Areas Since Five Years Ago

The results saw an increasing in spending, number of surveys returned, number of communities responding, amount of non-local attendees and volunteer hours accrued since the last survey conducted five years ago. This particular survey represents 2015, the last was done in the depths of the recession in 2010.

Sampling was done in large urban areas as well as smaller rural areas, to get a true cross-section of the nation. Only information that was received is included in the report; no extrapolating or guesswork is included. This means there are dollars out there not counted.

In Wake County alone, $557.2 million was spent, of which the local government received $27.1 million and it employed the equivalent of 19,973 full-time jobs through the amount of volunteer hours these events utilized. For a point of comparison, that represents more jobs than the largest employer in Wake County, which is the Wake County Public School System. Wake County’s numbers also came in above the entire State of New Jersey. 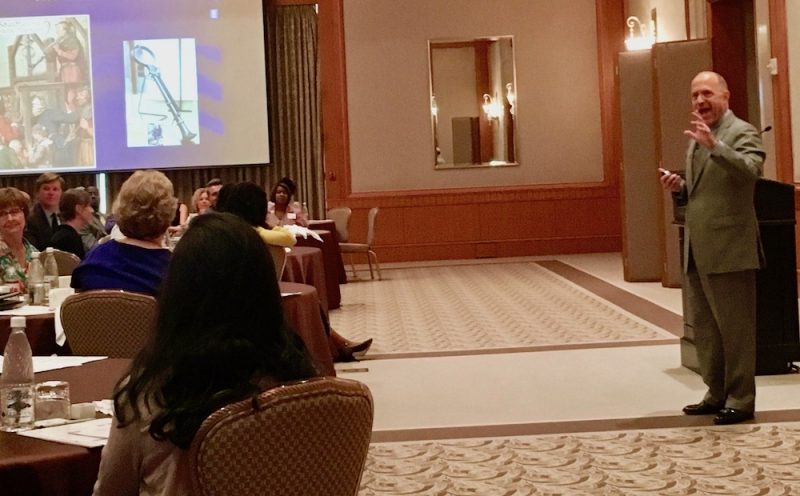 Randy Cohen, vice president of research policy for American for the Arts, making his presentation at the Umstead Hotel in Cary, June 23, 2017

Randy Cohen said a “small investment can yield a huge return,” because this cultural benefit brings an economic impact that can be measured and it turns out to be huge business.

The Americans for the Arts would like to see people help spread the word, especially to members of Congress. Locally our governments are already doing a good job of supporting the arts, as revealed by these numbers, but currently the National Endowment for the Arts and other cultural groups and initiatives are under fire in the federal budget.

If you would like to see the study and learn more visit : www.americansforthearts.org/AEP5