Sarah Wotus, a Cary resident and current student at the University of North Carolina at Chapel Hill majoring in Biostatistics with special interests in Environmental Studies and City Planning, contributed to this op-ed.

Cary, NC – Downtown Cary is revitalizing. By including a variety of stores, entertainment, and living options in the area, it is becoming the community center every town needs. Seeing the popularity of the Downtown Park, city planners are ecstatic for the future. Planners have one part of the design completely wrong though – cars. Cary needs to embrace a future where its residents are not attached to the vehicles currently in their driveways, and there is no better time than now.

Pedestrians are worried their movement throughout the area will be hindered by the increased traffic coming into the area. The city’s solution? Increase on-street parking and add striping to crosswalks to make drivers aware that pedestrians are in the area. Planners did not consider the more sustainable alternative to simply decrease cars. Instead they hold steadfast on the belief that inconveniencing drivers will hurt the economy and liveliness of downtown. Immediately this may be true as the citizens and city structure itself adjust to the new way of living. Planning, though, is all about the future. And Cary’s future must be one that relies less on cars and uses modes of transportation like biking and public transit.

In Cary, there are 1.9 available vehicles per household, 9.6 available vehicles per 10 adults, and only 2.5 percent of households have no vehicles. Not only is this high compared to cities in other developed countries, but Cary also has some of the highest rates in the U.S. according to Governing’s data on car ownership. These statistics are the first indication that Cary’s thinking is outdated. Additionally, research done by the American Public Transportation Association (APTA) shows that investment in public transit is actually better for the economy. For every $1 billion investment in public transportation, 50,000 jobs are created. While a little less than half are jobs pertaining to the industry, the other half are jobs created through productivity effects such as increased household savings, improved employer labor access and reduced congestion. Finally, decreasing car usage is better for environmental, mental and physical health. It improves air quality, increases productivity, allows for more community interactions, and promotes more active lifestyles like walking and biking.

So how? Let’s look at Freiburg, Germany as a model example. After studying renewable energy and city planning there this summer, it is clear the city took a step in the right direction by making it inconvenient to own a car. The first major step concerned the centrally located cathedral. Once just a cathedral surrounded by parking, the city decided to transform the parking lot into a market square where vendors could come every morning to sell their products. Parking was then moved to the outskirts of the city to make room for new public transportation and more walkable streets. Now, with costs anywhere from €30 to 40,000  per year to park, citizens are choosing to walk, bike, use public transportation and start car sharing programs. Freiburg has a rate of about 3.5 cars per 10 adults and has been considered one of Europe’s most sustainable cities for 10 to 15 years.

It’s time to bring these lessons back home. The Raleigh-Cary metropolitan area remains one of the fastest growing areas in the nation, meaning lots of redevelopment to accommodate a large amount of growth and little remaining space to grow. Cary planners are taking this to heart – in the past eight years stretches of Downtown Cary have seen major remodeling with several new businesses, as well as more green space with the Downtown Park. Downtown Development Manager Ted Boyd said it himself: “Given what we’ve done, the second phase needs to be spectacular” (as cited in the Cary Citizen). Cary citizens, let’s make it spectacular by demanding of our city planners that we become a less car-dependent town. It can all start with one small decision to eliminate a parking lot. 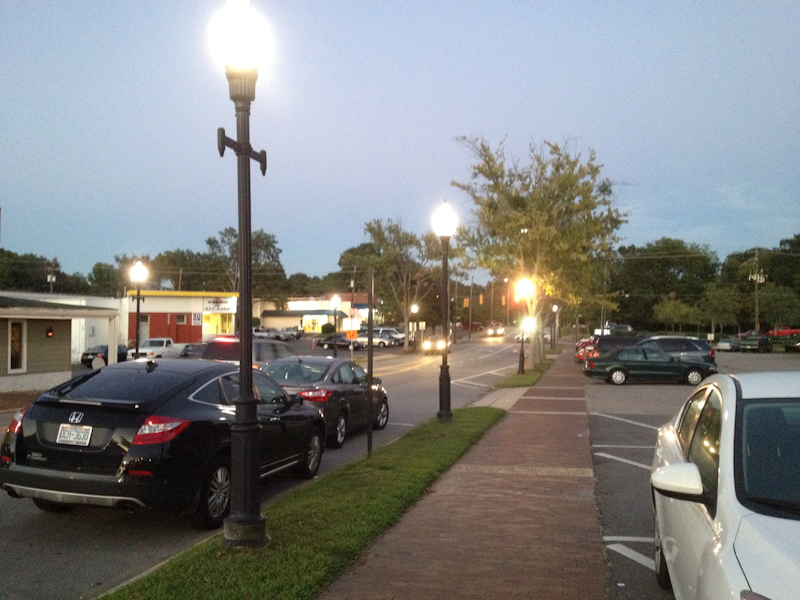 Sarah Wotus contributed to this op-ed. Photos by Hal Goodtree.