Cary, NC – It’s one of the largest storms ever recorded in the Atlantic. And now, as Hurricane Irma roars across Puerto Rico, it’s track could imperil North Carolina.

Irma is still five days and over 1000 miles away from NC, so forecasters are unsure of the exact path the storm will take.

Currently passing Puerto Rico, Irma is bearing down on the Bahamas and Cuba. If the storm turns to the north quickly, it could rake the East Coast from Miami to the Outer Banks, following a path similar to Hurricane Matthew in October of 2016.

If the storm takes a later turn to the north, it could pass up the west coast of Florida and the Panhandle. The westerly path could take Irma across Georgia and brush western Carolina.

A middle path would travel up the Florida Peninsula and could strike central North Carolina. 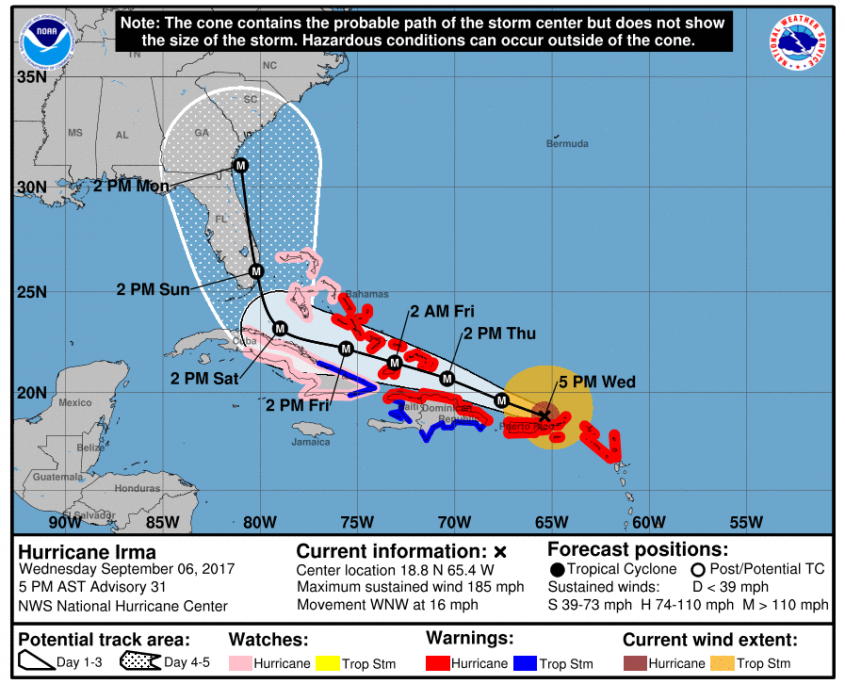 From the National Weather Service.

This afternoon, Governor Roy Cooper declared a State of Emergency that will go into effect at 8 AM on Thursday. This allows emergency response elements to power up and make plans in case of disaster.

What to do in the Triangle

It’s too early to know if Irma will impact the Triangle. But it’s not too early to pay attention as the path of this dangerous storm becomes more clear over the next 24-48 hours. Visit the National Hurricane Center for the latest information.

Story from staff reports. Pictures from the National Weather Service and NOAA.