Cary, NC – This was a busy week for me and has kept the string of days going without a day off.

The week included a regularly scheduled council meeting so I started on Monday by attempting to contact all council members about any questions or concerns they may have had with the agenda. I was able to contact four of the six council members. There were no questions since the agenda was short. Later in the day I along with the Mayor Pro-Tem met with staff to go over the agenda. They had no feedback or issues from citizens which led us to believe the meeting would be short.

After the meeting with staff the Mayor Pro-Tem and I met with the town manager for our weekly update. We talked about the newly submitted CBL proposal at the mall site (in addition to the IKEA), housing issues with multiple families, and the Markham trip. Our meeting lasted less than an hour.

Tuesday morning I gave welcoming remarks as the Town of Cary hosted the IoT (internet of things) workshop on healthcare. The group was discussed how IoT and big data can be used in efforts to help with issues like the opioid crisis. I am hopeful that some great ideas came out of that workshop.

Later Tuesday I traveled to a ribbon cutting for the Arkema building expansion. We got our wires crossed and I found out when I got there that the ribbon cutting had been cancelled. But they were very kind and generous and gave me a brief tour anyway. In case you are wondering Arkema has been located in Cary since 1984 and are headquarted here. They develop, manufacture and sell coating resins and additives for various applications and are recognized as one of the world leaders in materials for the coatings industry. Locally they employ over 80 people mostly in R&D. Those employees are mostly PhD’s in chemical engineering. We wish them great success and look forward to further expansions in the future.

Wednesday I joined council members at the Cary Chamber Annual banquet which included NC State chancellor Randy Woodson as the featured speaker. I was able to mingle and talk with people for about an hour and a half before having to leave for another event.

Next I headed over to the Page Walker for the Poe Center annual fundraiser. The keynote speaker was Sam Quinones who is the author of Dreamland. This book explains the opioid crisis facing the U.S. and Cary. This is an absolute must read. My role was to provide welcoming remarks. I also shared my story about being the son of an alcoholic and how addicts impact those around them. That event lasted about two and a half hours.

Thursday the council met for its first regularly scheduled meeting of the month. The agenda included 5 consent items, 1 public hearing, 5 discussion items, and 3 closed session items. There were only a couple of speakers from the public at this meeting. The council approved the staff recommended road and pedestrian projects to be submitted to the Capital Area Metropolitan Planning Organization. After some discussion the council also agreed to Cary’s participation in the historic preservation Certified Local Government program. Bids were approved for raw water transmission lines. Bids were also approved for the following road projects:

The staff’s recommendation to re-advertise the bid for the Cary Parkway at High House Road project was also approved. This was because in the initial round only one bid was submitted and it was approximately 50% higher than expected. It was noted by staff that most contractors for road projects are very busy and are unable to take on more work. After this re-advertisement, and if a bid is accepted, the project will probably begin construction next spring. In case you are wondering the current construction at the intersection is utility relocation. The council meeting concluded after about 2 hours. 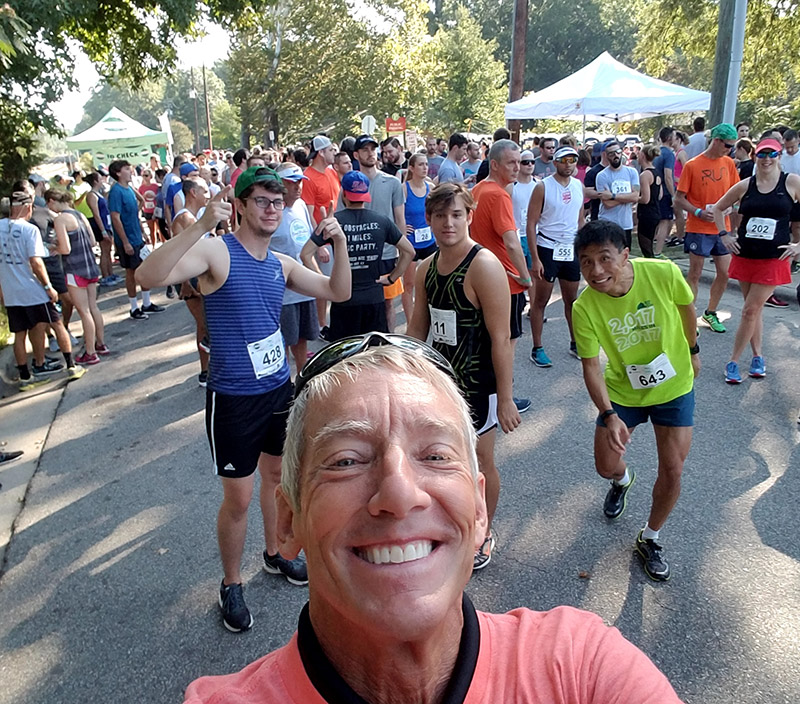 Saturday I had the honor and privilege to emcee the first annual Bond Brothers 5K. 100% of the proceeds went to CAPCommunity Foundation. They support organizations that specifically help children with physical disabilities, illnesses, abuse, poverty, absence of a parent, and more. What a great group. One of the vendors at the event was Read and Feed which is a mobile literacy program in Wake County designed to help low-income, elementary school children by strengthening their literacy skills by providing them with encouragement and by going to their neighborhoods. Both of these organizations are fantastic and I urge you to support them.

My role at the 5K was to start the event and then encourage runners as they finished. In addition, I was able to shake the hands of all the winners in the awards ceremony. There were close to 700 runners in this inaugural event and it was a great success.

After this event I traveled over to the Page Walker to meet with volunteers of the Cary Scavenger Hunt. From my understanding there were close to seventy teams this year. I was told that many of the clues were in the downtown area since that area was under construction last year. 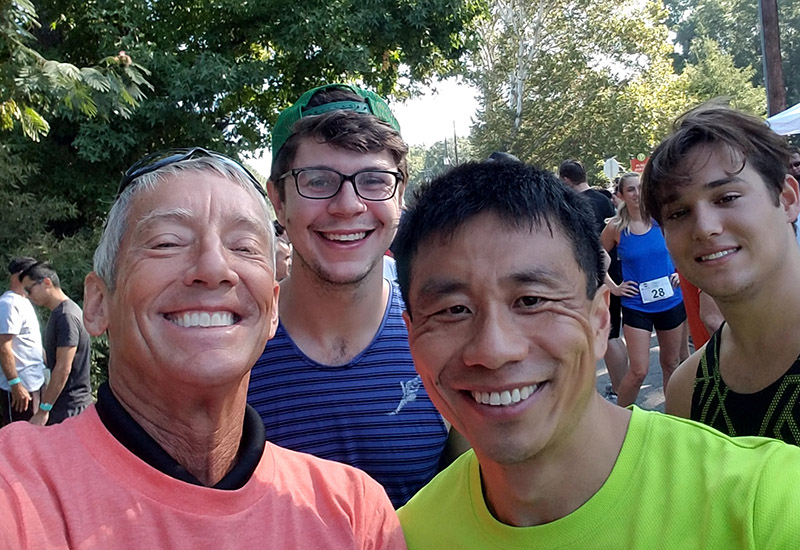 Next I traveled to the Herb Young Center to meet the veterans volunteering to help veterans get benefits. This was covered by all the local media. From my conversations people came from as far away as Arizona to see if they could get their VA benefits. This was the 3rd day of three and there were people lined up around the building most of the day. It is my hope the VA will allow more of these to serve those who have served us. God bless our veterans!

Sunday I attended the Atlantic Tire Professional tennis championships held at the Cary Tennis Park. I had the pleasure of awarding trophies to the doubles champions. The doubles match was a close one and was decided in a super tie breaker. The singles championship was won by a fellow that trained at the Cary Tennis Center for four years as a youth. What a great homecoming. The tournament was a great success and is a great way to market Cary around the nation.

Cary Continues to Combat the Opioid Epidemic on Many Fronts

This was an exceptionally exciting and powerful week for the Town of Cary. On Tuesday, approximately 150 health care professionals, technology companies and staff gathered on Town Hall campus to share how “smart” communities can use technology to help solve health care challenges such as the opioid crisis, aging population, and ADHD. The NC R!oT (Raleigh Internet of Things) event included various sessions throughout the day in the Council Chambers, a luncheon at the Herb Young Community Center and an evening social with exhibitors in the Town Hall Concourse Area. Mayor Weinbrecht provided opening remarks and Council Members Bush and Robinson attended the event.

On Wednesday evening, Mayor Weinbrecht and Council Member Bush were on hand to welcome Sam Quinones, American journalist and author, to Cary as part of his time in the Triangle talking about the opioid epidemic in the country.

And on Thursday morning, Sam spent an hour with staff and Council Members George and Robinson discussing his book, Dreamland, and his thoughts on the changing culture and values in America over the last several decades and how these changes have spurred the opioid epidemic in this country. He encouraged participants to create community spaces and opportunities for connection between citizens. Sam’s book, combined with the passion of the Mayor, Council and staff, has contributed to the Town’s steps in addressing the opioid issue in our community.

The Town received AAA ratings from all three rating agencies this week for the upcoming general obligation bond sale on September 26, 2017. Moody’s, Fitch Ratings and Standard and Poor’s also affirmed their AAA ratings for the Town’s existing general obligation debt. Receiving the highest ratings possible results in a lower interest rate for the Town. The Town will be selling $59.7 million in bonds to fund projects from the 2012 community investment bond referendum and refinance a portion of its existing debt.

Pop-Up in the Park

The first Pop-Up in the Park was held on Wednesday afternoon at Walnut Street Park. This new outreach initiative brings a taste of Town programs and services to everyday park-goers. The drop-in audience received free passes to SK8 Cary while checking out action sport demos and gear.

Try Transit Month is an annual event to encourage citizens to try public transit. In addition, GoCary intends to highlight the region-wide collaboration between transit service providers – GoCary, GoTriangle and GoRaleigh – in an effort to provide seamless, efficient and enhanced transit services to the region.

The Herb Young Community Center hosted the Veteran’s Benefits Action Center for the 2nd year on Thursday and Friday of this week. The event will continue on Saturday from 9 a.m. until 4 p.m. The program, offered through Veteran’s Affairs, allows eligible veterans and dependents a unique opportunity to be assisted by a combined team that includes Veteran’s Organization Service Officers, Department of Veteran’s Affairs, benefits officials and healthcare representatives.

Seven Cary PD officers, joined by wives and kids, represented the Town at the 9/11 Memorial Run on Sunday at NC State. The officers had good interactions with the students as well as the other responders who were there to participate. It is especially significant that three of our officers elected to complete the run in full uniform, including all gear and a bullet-proof vest. This was done in recognition of all those emergency responders who ran up and down the towers on 9/11 in full gear to save others.

The Town’s Good Hope Farm project was featured on the NC County Commissioner’s website as an example of best practice for economic development. We’re pleased to see this collaborative partnership recognized for others to learn about.

Emails from staff included an update for Google. Their current 2017 plan is to install fiber in three areas in Cary including an area near downtown and an area in the western part of community. Google is also piloting a new construction technique called micro-trenching. This technique is a less invasive way to install fiber and hopefully deliver services to Cary residents quicker.

Next week will also be a busy week. Activities will include a MacGregor Downs Anniversary videotaping, a meeting of the Wake County Mayors Association, the town’s advisory boards and commissions annual meeting, a meeting of the Capital Area Metropolitan Planning Organization’s executive board, the Cary Candidate forum, and the 4th Annual Dragon Boat Festival.

Well, that is all for this week. My next post will be on Sunday, September 24th.  Although I have Facebook and Twitter accounts those are not the best means of communications with me. Please send all Town of Cary questions or comments to Harold.Weinbrecht@townofcary.org and email personal comments to augustanat@mindspring.com.

The Winners of the 2017 Cary Scavenger Hunt
Scroll to top