Cary, NC – Plans to redesign the High House Road/Cary Parkway intersection have been around since 2008 in Cary, but a recent setback in contractor bids will delay start on the intersection’s expansion until at least Spring 2018.

Difficult Work and Too Few Workers

The High House/Cary Parkway intersection is one of Cary’s busiest, with more than 55,000 vehicles passing through it each day. Plans for the intersection would have it widened to include new turn lanes and other aesthetic changes. These lane changes would be a second left turn lane at all but the southbound road from Cary Parkway and a dedicated right turn lane on all four roads.

Jerry Jensen, Cary’s transportation and facilities director, asked the Cary Town Council to vote against the bids the project had received. Only one company submitted a bid and Jensen said the proposal was around 50 percent higher than it was projected to cost.

Jensen said there are two main reasons for the lack of bids. One is the risks involved with this particular intersection.

“This is a heavily trafficked intersection so there’s an inherent risk, and you have to keep access open to the surrounding businesses while it’s going on,” Jensen said.

Additionally, because of the relatively small size of the intersection and the fact that it would not be closed during the day, Jensen said it would make for a tight environment. There are also utilities buried underneath the intersection that are still being relocated.

The other reason Jensen cited is a lack of supply in the labor market.

“In Wake County, we have a lot of construction now so contractors are busy,” Jensen said. “The number of qualified contractors with space in their schedule to add in this kind of project is not there.” 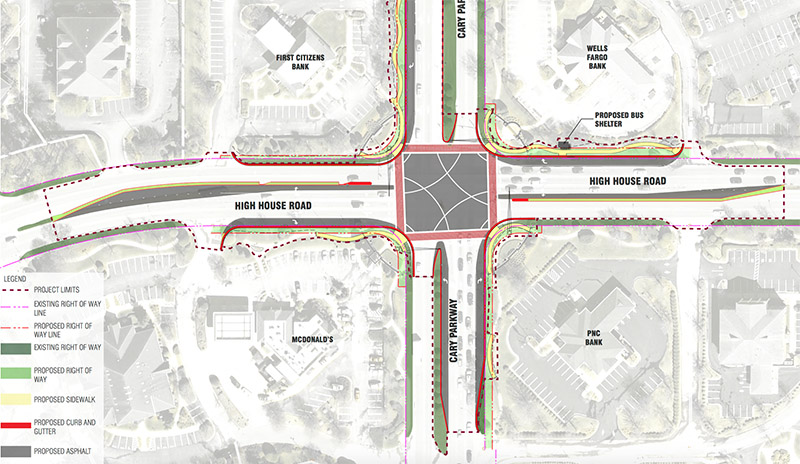 The Town of Cary still plans on having this intersection widened and Jensen said they will re-advertise later this Fall.

“We hope to have construction start this Spring,” he said. “There will be a delay but it may end up being a good thing because this way we wouldn’t be doing construction over the Winter, which is harder.”

Already ongoing is the relocation of utilities underneath the intersection.

“Even before we started this project, we knew these utilities would be in the way,” he said.

The town is coordinating with the private utility companies to relocate them. In the process, they are mapping out what is underneath the intersection and Jensen said they are finding other lines and features both town staff and the utility companies did not know was there.

“This makes things easier for the contractors because they’ll know where everything is and won’t hit any utilities while they’re working,” he said.

Jensen said the town is making other efforts to make the project more appealing to contractors. Those include looking at changes in the timeline and the hours construction workers can work, simplification of the bid process and quantities and generally re-examining the project to see if there is anything town staff missed.