One is from New Jersey, one is from North Carolina. One owns a barbershop, the other one is the Chief of Police in the town where the barbershop is located. One has had some not-so-good experiences with Police Officers, the other one prides himself on recruiting only the best “PEOPLE” to become Police Officers. One had “ZERO” trust for the badge, the other one wants to desegregate the badge. They may sound like oil and water to most, but they’ve become the beginning two pieces of the puzzle that has taken the hearts of grown men, of many races, from battling to brotherhood.

This is Tron, who owns Headliners barbershop in Cary. And behind him is his “FRIEND,” and “BROTHER,” Chief Tony Godwin of Cary. About four years ago, Tron was asked if he would be interested in inviting the Cary Police in on Saturday mornings, to have Saturday morning rap sessions. These sessions would give people from the community, all surrounding communities, a chance to sit down with Police Officers and have some very upfront and real conversations. 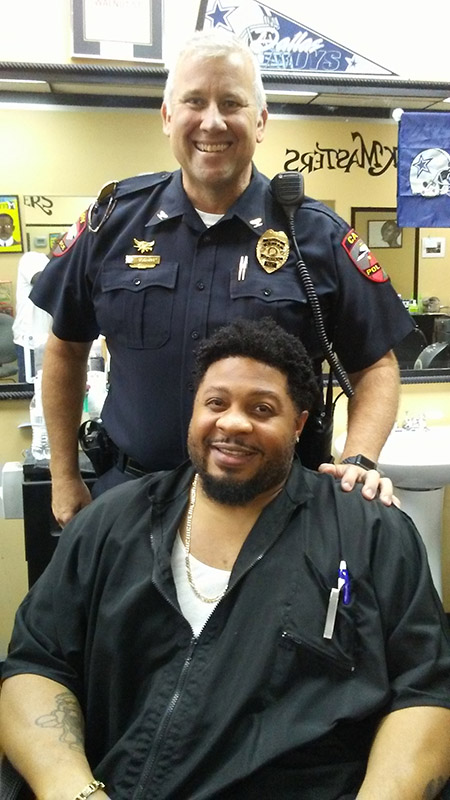 Because of some of the experiences that Tron has had with the Police, his “trust radar” went up immediately. After a little convincing (Tru Pettigrew), Tron agreed, and PIECE #1 of the “Destiny Puzzle” is established! Now some may say Tron was being too sensitive or that he was overreacting. But let us all keep something in mind. There are certain things that once they get into your spirit, they stay in your spirit. If adultery is committed in a marriage, and divorce follows, which one of your radars would pop up first if you decided to try dating? “EXACTLY!”

The “trust radar!” Broken trust is one of those things that just seems to grate on your soul like nothing else. It can have a very powerful ripple affect in your life, which in turn makes you feel like a 24-hour victim, and trusting people becomes very difficult. It’s a nasty stronghold that has no desire to let you go, so you have to let go of it.

I’m so proud of you Tron! I know how huge that was!!! Broken trust can make us punish the innocent for heart crimes that they didn’t commit.

So in walks PIECE #2! Chief Tony Godwin! With his hands tied of course. What do I mean by tied? That’s how Tony, and most Police Officers, feel. Not only do they want to extend a helping hand, they want to offer some trust along with it. They want a chance to be given a chance. But between the social media madness, fear, generational lies and a few bad badges, some people have a hard time with the old, “Protect and Serve,” promise.

And for the record!!! Not all officers agree with, or condone, everything that other officers may do or say. Trust me when I tell you!! That brotherhood between Police Officers is strong!! But for officers such as Tony, badge brotherhood could never override the eyes of the Lord that watches over him. His lines in the sand cannot be compromised. These “BRAVE” men and woman that do that job! God bless them! Because I would’nt do it.

So many amazing things have happened because of these rap sessions! Hearts have been healed! Trust has been restored! Eyes can now look beyond the occupation and see people! Walls have come down! Time spent has gone up! Acquaintances have become lifers! Communities aren’t so focused on color! Families have grown! People are free! Cop isn’t a curse, because character has been given a chance! And now with the badge comes a hug, not the fear of being mistreated. Put all of these victories together, and what you get is “God’s great puzzle!” You get God’s “DESTINY PUZZLE!”

These rap sessions are held the first Saturday of every month at 9 AM at Headliners barbershop, 1028 Ryan Rd.