Cary, NC – In a dominant show this past weekend, North Carolina FC got its largest margin of victory ever with a shutout against the Indy Eleven. Meanwhile, the North Carolina Courage narrowly lost their final home game of the regular season as they enter the playoffs as the top-ranked team. 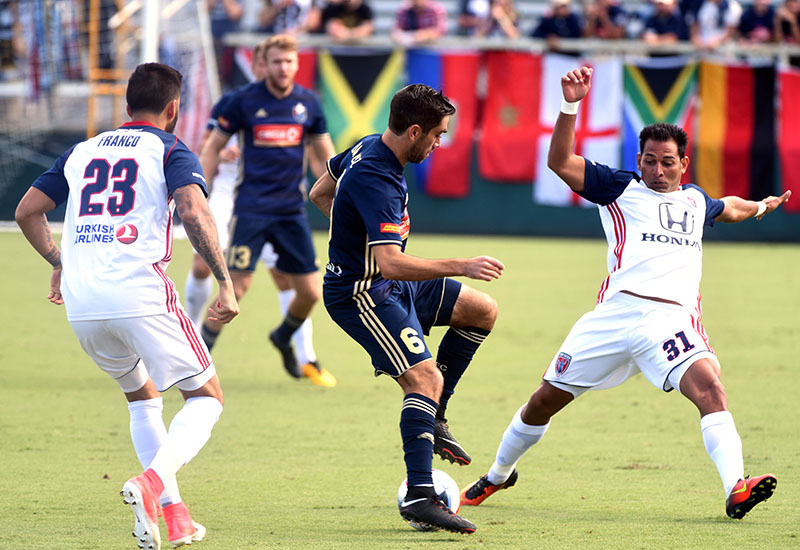 North Carolina FC took on Indy Eleven on Sunday, October 1, 2017 at Sahlen’s Stadium at WakeMed Soccer Park. While the two teams have had competitive matches over the past two years, this one was far more lopsided. By halftime, the game was already 4-0 in NCFC’s favor.

Renan Gorne was part of several of these early goals, either kicking the goal in himself or passing the ball for an assist. Steven Miller and Nazmi Albadawi were the other players with goals in the first half, giving the team its biggest halftime lead in more than two years.

The second half was more quiet and the Indianapolis team came close to getting one goal of their own. But it was blocked and in the final minute, Dre Fortune hit a huge 20-yard kick that went into the net’s top corner. The game ended with a 5-0 victory, the team’s largest margin ever.

“Obviously it was a great performance with five goals,” said NCFC Head Coach Colin Clarke. “We’ve had our troubles here at home and it was nice to get the first win in front of our fans in the Fall Season in an important game. It’s pleasing to see them develop and evolve as a team and a group moving forward towards the playoffs.”

The next home game for NCFC is Saturday, October 7, 2017 against Puerto Rico FC. Half of all ticket sales will go to Puerto Rican hurricane relief funds. 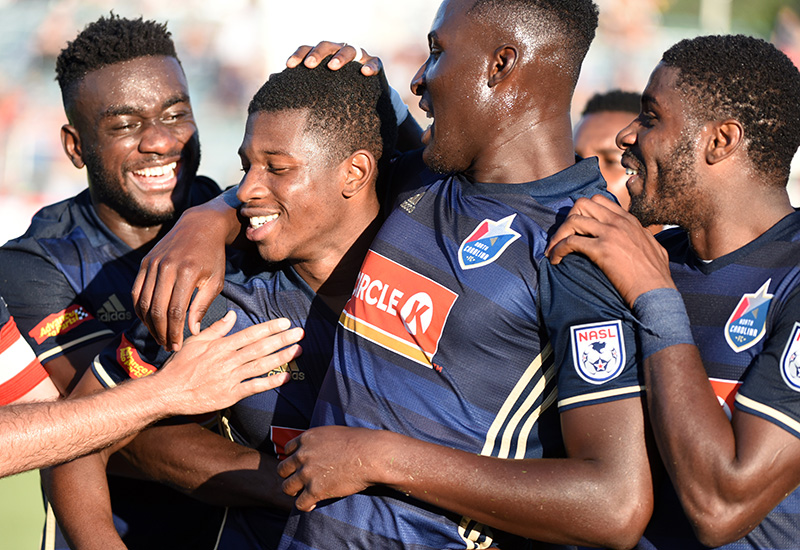 One day earlier, on Saturday, September 30, 2017, North Carolina Courage played the Orlando Pride at home, as the top-ranked home team got ready for the playoffs. The game started with the Courage receiving the NWSL Shield, given to the league’s regular season leaders. No team has ever won the Shield and the championship in the same season.

It was a larger-than-average turnout as the two teams had an extremely competitive match. Lynn Williams and McCall Zerboni both dueled with Orlando’s goalkeeper Ashlyn Harris but were unable to get anything past her. Meanwhile, Orlando racked up points steadily, getting to 2-0 by the 52nd minute.

The North Carolina Courage with the NWSL Shield

This did not make the Courage dejected, however, and Williams had a career-defining series of plays. In the 62nd minute, Taylor Smith snuck into the box and got the ball to Williams, who sank it for a goal. Then just five minutes later, Williams got a penalty kick and tied the match up 2-2.

For the remainder of the game, it was an intense battle as both teams struggled for a lead. In the end, a free kick during stoppage time was the decider and Orlando’s Alanna Kennedy gave her team the win at 3-2.

“I was really pleased. We came back from being down 2-0,” said North Carolina Courage Head Coach Paul Riley. “I don’t know if we deserved to be down 2-0, because we missed a lot of good chances early in the game to get ourselves ahead. Every game you get something different that hits you in the face. I don’t remember us being down 2-0 all season.”