Cary, NC – With the Canes coming home after a big 6-3 win over the Toronto Maple Leafs in Toronto the night before, back-up goalie Cam Ward was in for the Canes while back-up Carter Hutton was tending net for the Blues. For the first time since Ward’s rookie year, he’s currently the legitimate back-up. The Canes lost 2-1 but Ward’s play was exceptional and both Blues’ goals were on rebounds after phenomenal saves.

While the Blues were the more rested team (since the Canes didn’t get home from Toronto until three in the morning), the first period played into the Canes hands. The Canes are a much faster team, and unfortunately also a much smaller team as the Blues, as typical for teams in the West, are huge. Five of the six defensemen are six-foot-two-inches or better. There are four Blues players injured and three are six-foot-four-inches. Their All Star sniper, Vladimir Tarasenko, is beefier than all Cane skaters, including Jordan Staal who is four inches taller.

A noticeable difference between the Toronto game and this game was a huge reduction of Canes in the dirty area in front of the crease. All six of the Canes goals the night before were down “Broadway,” meaning the slot area in front of the goal. The Blues defense did an excellent job at clearing the smaller Canes from the crease area, giving Hutton clear visibility on most shots. The Canes were tentative on clears in their defensive zone and had too many weak passes that had coach Bill Peters, putting his scratch pad up to his mouth talking to assistant coaches Rod Brind’Amour and Steve Smith about changes that were needed. And needed immediately as several clear attempts wound up resulting in second or third shots for the Blues. One bright spot of the night was Sebastian Aho.

Late in the period, Aho entered the Blues’ zone, went down low along the near boards, did a button hook and realizing he had no teammates joining him and sent a decent hard shot to the net that hit Brayden Schenn’s skate and forced Hutton to make a quick save. 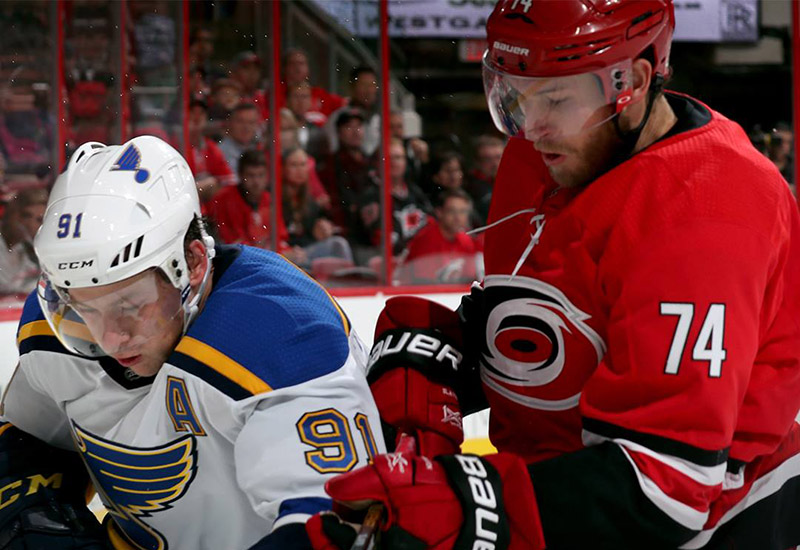 Early in the second, Ward made a excellent glove save off a quick Scottie Upshall shot in which Ward was perfectly positioned anticipating the shot off a pass. The Canes came close a few minutes later when Aho entered the O-zone, saw Staal making a rush to get in front of the crease, then made a pretty pass right on Staal’s tape for what looked like a sure tip-in goal only to be stopped by a glove save by Hutton. Noah Hanifin, who had his second very solid game in a row, joined a rush mid way in the period.

Hanifin, coming in fast on the right side, sent a pass to the dirty are only to see it blocked that came back to him. Hanifin collected the puck, went behind the net to the far corner than made a nice feed to Jeff Skinner in the mid slot area. Skinny’s quick shot was blocked but the Canes went to school on that play to remind them the dirty area is the high percentage spot to score. Two shifts later the Canes had a tough time clearing the puck out of their D-zone. There were three weak attempts to get the puck over the blue line but each time, either the height or long reach of the Blues kept the puck alive in the Canes end.

Oskar Sundqvist had a shot in close that Ward made an excellent pad save but the defense left Dmitrij Jaskin alone who banded the rebound in for a 1-0 Blues lead. A minute later, Justin Williams intercepted a pass at his own blue line, skated through the neutral zone picking up speed charging towards the Blues net. As Willie was approaching the net, he drew a defenseman who did a questionable play by going down as if the intent was to wipe out Willie like a bowling ball but just before the strike, Willie gave a perfect back hand pass to Skinner who banged it in for his team leading sixth goal of the season.

Ward Kept Canes in the Game

The effects of the game the night before took effect for the Canes in the third as it was more the Canes lost a step rather than the Blues picking up a step. Shifts were noticeably shorter and cycling in the O-zone, which makes the Canes successful against larger teams, was non-existent. The Canes were only able to get one shot off before the play was headed the other way.

Midway in the stanza, the Blues top line was on the ice putting pressure in every corner of the Canes end. After a flurry of shots that had Ward do everything but stand on his head, after great pad save from a hard shot in the slot from Jaden Schwartz, the puck rebounded to Schenn’s stick for an easy tap in to put the Blues up 2-1. The Canes were out of gas and just couldn’t dig down for a viable attack the rest of the way.

Ward was pulled with about two minutes left hoping for both a tying goal and not a repeat of the disastrous outcome they had against Tampa Bay. Teuvo Teravainen went down with what is reported as an upper body injury that appears to be either an elbow of shoulder injury.  He was outstanding in the Toronto game so hopefully holding him out was just precautionary.

Canes Stonewalled in OT, Lose in Shootout To Ducks, 4-3

The Carolina Hurricanes did everything but score in an impressive five minute overtime period, getting off nine shots, three on breakaways but just couldn’t get one past Ryan Miller. Corey Perry, scored the lone shootout goal, giving the Ducks the 4-3 win.

Skinner Notches #7 on the year

The Anaheim Ducks played just 22 hours before in Florida so one would think the Canes would take advantage of what should have been tired legs but it was the Ducks who seemed to have the early jump. In what’s getting to be a standard line against western teams, the younger and smaller Canes were taking a shoulder, forearm or hip check on what seemed like every shift. By the end of the first period, the Ducks amassed 17 hits to the Canes two.

The brightest spot of the first period was a seeing eye pass from Elias Lindholm to Brett Pesce breaking in from the right point. Miller, still having cat-like reflexes, made a quick pad save that had goal written all over it. Anaheim lit the lamp first on a no-look shot by Ondrej Kase, from the top of the face off circle that went stick side of Scott Darling that he had to want back. The Ducks added a second goal at the 17:14 mark that was a defensive let down by the Canes.

The puck was along the near boards that found all five skaters within three feet of the puck. NHL iron man Andrew Cogliano was able to squirt the puck to the center of the ice where Derek Grant was all alone and picked 5-hole as the place to send the puck past Darling. Late in the period the Canes were on the powerplay which has gone dormant in the past five games. With just seconds left in the period, Derek Ryan had the puck along the half boards and made a hard shot/pass towards the net.

Justin Williams tipped the puck up that hit the top crossbar just as Jeff Skinner was coming around the right side of the net.  Skinner got taken down from behind while another defenseman swatted the stick from Skinners’ hands with the puck hitting Skinner’s boot before trickling in to cut the lead in half. 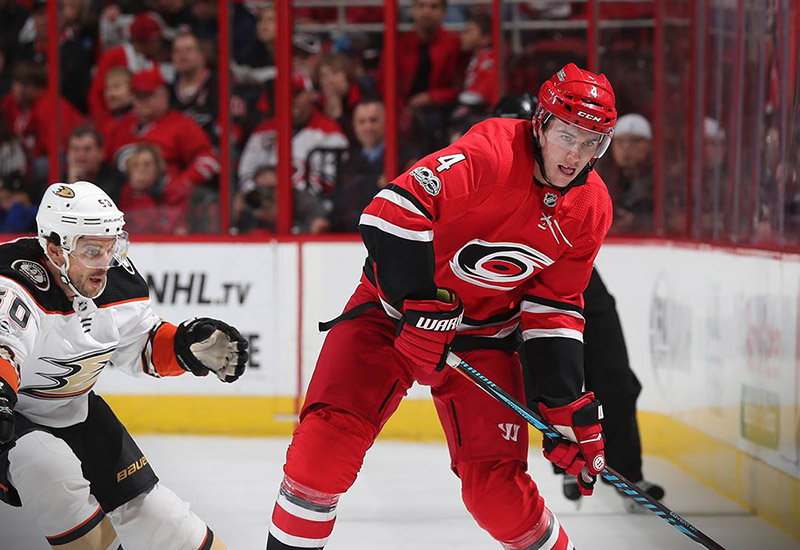 Coach Bill Peters is all about analytics and the “hit” number had to be a topic he harped on as the Canes came out in the second with their heads on swivels and doing something to even the “hit” category to get the Ducks off their game. That strategy was working as the quality of the Canes shots improved as the quality of the Ducks shots diminished. A little over the 13 minute mark, the Canes had good puck control in the Ducks end. Sebastian Aho had the puck behind the Ducks net skated hard around for what most thought would be a wrap around but the sly Finn, drew the D-man to him then slid a sweet pass to Jordan Staal for a pretty goal.

Late in the period, Williams was in the corner passing up to Teuvo Teravainen along the half boards. Teravainen skated to his left for a couple of strides, passing over to Justin Faulk. Faulker carried the puck over to the left point, waited for Williams to get in front of the net then let a hard slap shot go that went in off Miller’s glove for a 3-2 Cane lead.

With a little over 15 minutes gone, the Canes lost the puck behind the Ducks goal. Methodically, the Ducks advanced the puck through the neutral zone, got stopped on the initial attempt to enter the Canes end, but Cogliano was able to bring the puck in on the right side. As he went down along the boards he dropped a pass to Jakob Silfverberg, a perennial Cane killer, who used Noah Hanifin as a shield, sending a shot 5-hole past Darling to tie the game.

The Canes looked great in the overtime, getting off an unbelievable nine shots, three on breakaways only to see Miller, playing in his first game of the year, stopping all. To keep things along the fowl line, the Canes laid a goose egg in the shoot out with none of the Canes shooters looking good. Bad end to what could have been a nice win. The game must have meant something to Miller as after the game he made sure to pick up and keep the puck.

Next home game is Tuesday, November 7, 2017 against Florida. Be there!