Cary, NC – The Carolina Hurricanes and the Florida Panthers played one of the most exciting games of the season that had everything any hockey fan could ask for: a home team win, fast play that got the crowd into the game early and throughout the game, a successful powerplay, successful penalty kill, a very exciting overtime and plenty of entertainment off the ice as the game theme was Star Wars with The Force being with the Caniacs on and off the ice.

Both teams have been in a funk recently and a win was sorely needed to help get both teams back on track. The Canes certainly had the early advantage, skating harder and faster to the puck, throwing rubber in direction of the goal from every player and every angle. And after a horrible and disappointing game the night before by Scott Darling, Cam Ward was in net, sharp on his angles, had the typical Cam “good rebound-control” and a very quick glove.

The Canes took advantage of the lack of discipline by the Cats as the first three penalties of the game gave the Canes powerplays. The third was the charm as the Canes scored a powerplay goal on what has been an anemic effort all season so far. Teuvo Teravainen is the quarterback on his PP unit and passed the puck up to Sebastian Aho in center ice along he near boards.  Aho entered the zone, slowed the pace a bit allowing Elias Lindholm time to get to the crease. Just as Lindy was getting to the dirty area, Aho sent a pass right to Lindy’s tape for a tip in that found its way into the net for a rare powerplay goal for a 1-0 Cane lead.

Late in the period, Jared McCann must have said something to Brock McGinn as after a whistle the gloves immediately came off and the two of them started going at it with Brock’s brother, Jamie, standing with Justin Williams having what must have been a fun conversation. 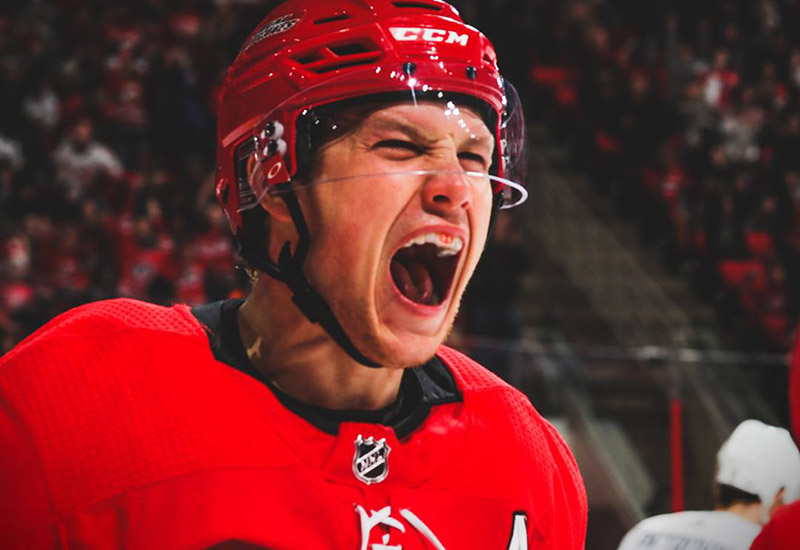 The second period started seeing more of the chippy play that started in the first with the checking becoming more intense. All teams know it’s easy to get under Jeff Skinner’s skin and just under the eight minute mark, after Skinner lost the puck along the boards behind the Cats goal, Mike Matheson lost his stick and was still checking Skinny. Skinny, with his back to the boards was being held against the boards by Matheson as the puck was cleared out of the Cats’ end.

Skinny tried to break free but Matheson kept pushing so Skinny started pushing back, as Skinny broke free and was skating away Matheson reached out to grab Skinny who tried a face wash. Michael Haley grabbed Skinny from behind so Justin Faulk did the honorable thing and went after Haley. As Skinny was being escorted by the linesman to the box, Mark Pysyk came by and said some words to Skinny who tried to explain his version but Pysyk must have disagreed so Skinny, while being held by the linesman, gave Pysyk a face wash drawing a second penalty.

Justin Williams sat in the box for Skinner’s second penalty and seeing those three in the box and could only imagine what was being said. Just over a minute later, with the Cats on their powerplay, Joakim Nordstrom, who has been absolutely phenomenal on the penalty kill lately, put a hard and legal check against Vincent Trocheck along the far board. Jonathan Huberdeau took exception and grabbed Nordy from behind and with everyone pairing off, the refs got everything under control with Huberdeau getting the lone penalty.

Just as a TV timeout was starting, Derek Mackenzie grabbed Noah Hanifin around the neck and must have made an offer Hanifin couldn’t refuse. Trevor van Reimsdyk was just about to pull MacKenzie’s arm off Hanifin’s neck but looked up and skated away. Hanifin agreed to the dance and proceeded to pummel MacKenzie but the intent of the Cats’ captain was to send a message to his own team. 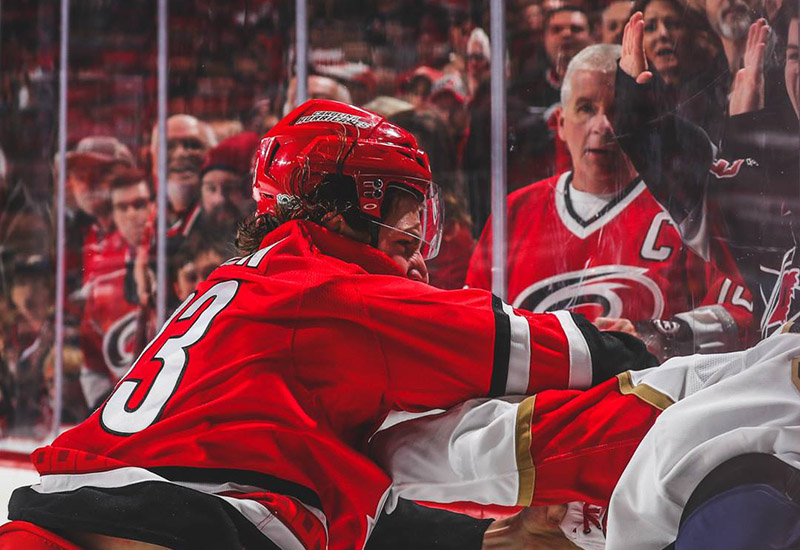 Skinner Gets 10th of the Season on Pretty Goal

The third period saw the Cats come out a completely different team as they seemed to pick up a step. Wardo was having a great game and the Panthers took advantage of a defensive lapse early in the third to get the Cats back in the game. With the Canes on another powerplay minutes later, Derek Ryan passed to Skinny who was down low to the left of the net. Skinny eluded a defender to get to the corner of the net and from just four inches in front of the goal line lifted the puck high over James Reimer’s shoulder hitting the inside top of the net to put the Canes back on top.

With 2:02 left in the game, Reimer went to the bench for an extra skater. Give the Cats credit as they seemed to have all six skaters on Ward’s doorstep and with everyone jamming for the puck, the Canes couldn’t clear either a Cat player or the puck with the puck eventually going in to tie the game at the 18:04 mark. The Canes started overtime with Jaccob Slavin, Brett Pesce and Jordan Staal which had to be an attempt to defend any attack as all three are great defenders and not the most serious scoring threats.

Just as it looked like the game was going to a shootout, the Canes made one last attack. Lindy had the puck and went right for the net taking a shot, Reimer made the save but Hanifin was there for the backhander that went high and in with two seconds left giving the Canes a much needed with and left Hanifin just an assist short of a Gordy Howe Hat Trick. Great game in every respect and hopefully the Canes can build on this win for a long road trip.

Next home game is Saturday, December 16, 2017 against Columbus. Be There! 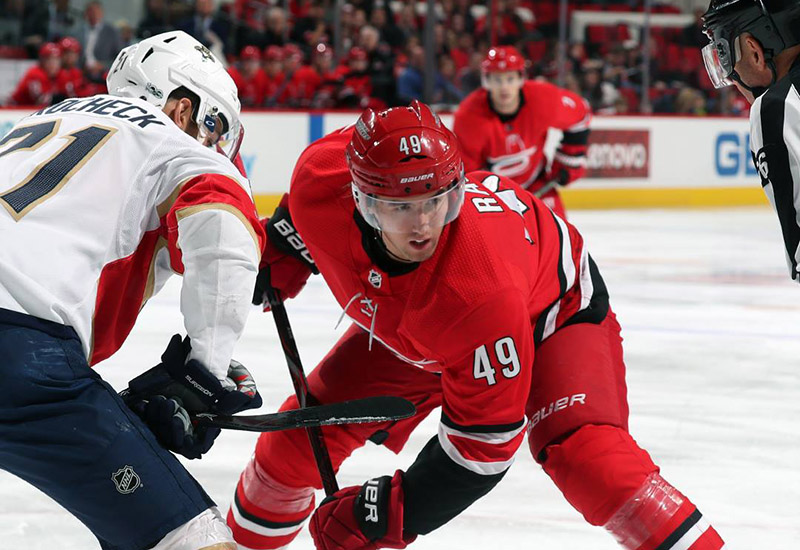