Cary, NC – If you thought last week’s cold spell felt too long, it wasn’t just your opinion. Cary, and the Triangle at large, broke temperature records with the longest period below freezing in recorded history.

Temperatures in Cary dropped to freezing levels at 2 AM on New Year’s Eve 2017 and stayed that way until the following Sunday, January 7, 2018. Weather records at WRAL and WTVD differ on whether the past record is 157 or 159 hours, set in January 1982. However, both records have been broken as above freezing temperatures were recorded mid-day on Sunday.

The exact record is still being determined by local weather agencies but temperatures did not go above freezing by Saturday, January 6, 2018 at 5 PM, exceeding 180 hours of consistent freezing temperature.

While the freezing record has been broken, Cary is not free from cold weather. Temperatures will hover between 50 and 60 degrees Fahrenheit for the rest of the week, but projected rainfall on Thursday and Friday will wash away much of the remaining snow and ice still on the ground. There will possibly be freezing temperatures again this coming weekend but as forecasts are calling for clear skies, that seems increasingly unlikely.

Cary’s burst of cold weather had impacts beyond the record books. Even before snow and ice were on the roads, multiple schools had delays and early cancellations as heating systems were unequipped to handle the temperatures. There were also many reported plumbing problems related to frozen water pipes and a water main broke in Downtown Cary along North Harrison Avenue.

Snow and ice also resulted in a State of Emergency across North Carolina, in effect from Wednesday, January 3 to Saturday, January 6, 2018.

While the Triangle has broken the official record set in 1982, there were two eight-day stretches of consistent freezing temperature recorded in 1895 and 1917 according to WRAL’s records. However, those were not recorded with hour-to-hour specificity. 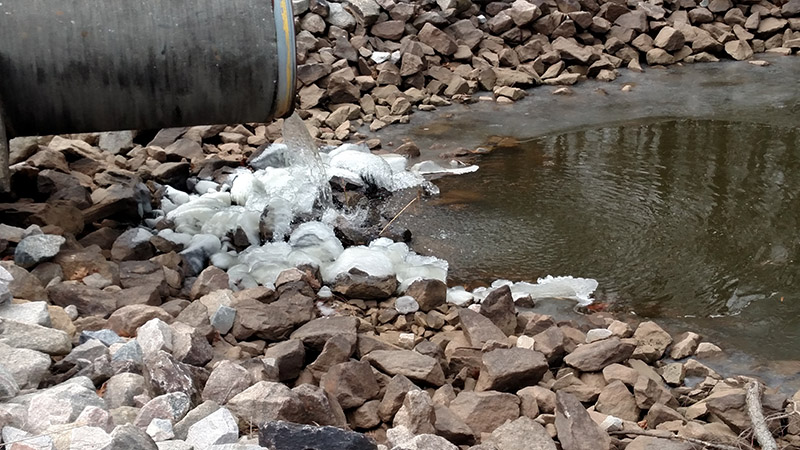 Story by staff reports. Photos by Michael Papich and the Weather Channel.