Cary, NC – Cary folks recall finding arrowheads and evidence of Native Americans living in Cary from thousands of years ago.

Native American Indians were living everywhere in the Cary area over the last 12,000 years. North of Penny Road and east of the Birkland subdivision, there is a large field. Our old farmhouse (now part of Jack Smith Park) is next to that property. That field had an above average number of Indian artifacts and arrowheads spread all around, so whenever it rained, if the field had been plowed, I would go over there as a kid and walk around the field to look for arrowheads. I still have them.

As in any community, there are certain spots where you will find concentrations of arrowheads. They can be anywhere. One time I crawled up under our farmhouse and found an arrowhead under there. The neighbor kids had good luck too, finding spots with concentrations of arrowheads. Usually the ones we found were for spears from the 3,000-to-8,000-year-old range. It was exciting to find something manmade that is five or six thousand years old. Most of them are that old here, at least the ones that are easier to find.

Most of the true “arrowheads,” that go on an arrow to be used with a bow, are an inch long or less. They’re tiny. Those are very modern. We think that Native Americans only had bows and arrows in the last thousand years or so, making them fairly modern. Before that, they made spears for a throwing arm. 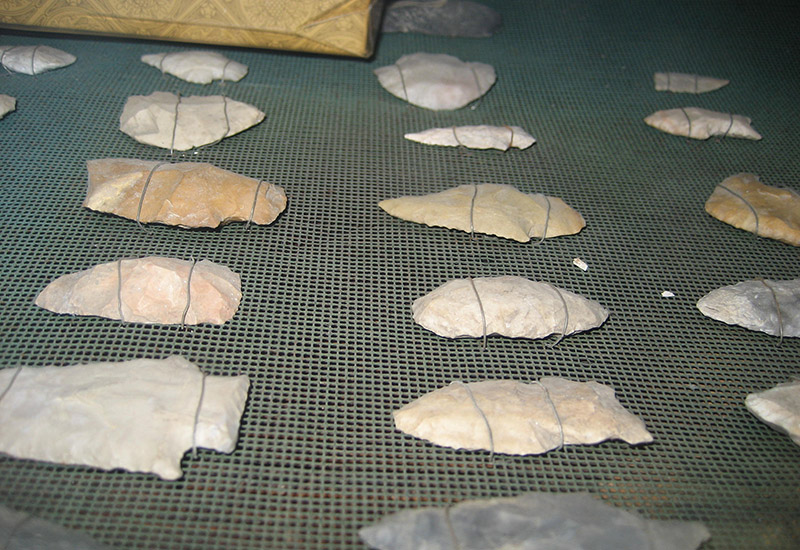 Part of our farm was on a hill. That place up on the ridge above our homestead on Penny Road was where a community of Indians lived.

On the ridge, we had a field across the road from our house. When you plowed, you would pile up all these arrowheads. We never knew what we might find while plowing.

Throughout history, you’d hear about Indians always living on a creek. After that gas line went through, we found arrowheads for years and years on that gas line route. We collected them and saved them. The creek has changed and the subdivision is on that land, so all of that is gone now, covered over by the building blocks of time. I

t was pretty incredible as a kid to find that kind of evidence of earlier peoples and civilizations here, going way back. Those arrowheads that I found and washed off myself were the evidence. I found maybe ten or twenty of them over time.

Story by Peggy Van Scoyoc. Much of Cary’s Heritage is taken from her book, “Just a Horse-Stopping Place, an Oral History of Cary, North Carolina,” published in August, 2006. The book is a collection of oral history interviews conducted between local citizens and Friends of the Page-Walker Hotel. The rest comes from later oral history interviews with local citizens. Photo by Denise Krebs.