Cary, NC – The newest team in the NHL, the Las Vegas Golden Knights, entered the game as “the best in the west” and left the game as “best in the NHL” as they beat the Carolina Hurricanes, 5-1, in a game the Canes were never in from the drop of the puck. The Canes beat the Golden Knights in their first match up in Sin City which was also Cam Ward’s 300th career victory but this game was played as if many Cane players were at the casino the night before until the wee hours of the morning.

Scott Darling started in net as Wardo was the winning goalie the night before in Detroit. Darling needed to have a solid game to get back his #1 goalie status, and you could count on the coaches and players, including Wardo, wanted Darling to do well. It just wasn’t going to happen this night as Darling was pulled in just under 13 minutes after letting in three goals. The first goal was a defensive let down that had two defenders going after William Carrier.

Carrier carried the puck fast and hard to the net going past Darling drawing both defenders then sent a sweet backhand pass to Pierre-Edouard Bellemare who beat Darling. Granted, Darling was left out to dry but it’s in situations like that where a star goalie will shine. Justin Faulk objected to an interference penalty that was text book and the Knights’ Colin Miller scored a powerplay goal from the high slot on a slap shot that Darling didn’t see. Just under 40 seconds later, Jonathan Marchessault, justifying his new contract, got a sniper’s goal that beat Darling high glove side.

The Canes got a powerplay late in the period on aggressive play by Elias Lindholm. Lindy, fresh off two goals the night before, finished a check in the corner then after getting back on his feet and going up ice, Marchessault took offense to Lindy’s fine hockey play. Marchessault first dropped his gloves but Lindy quickly wrestled his backwards onto the ice with the linesmen stopping any further action. The Canes’ powerplay has been making a surge lately and their first of the night continued that good fortune.

The Canes won the faceoff and kept the puck low. Justin Williams had the puck in the far corner, passing behind the goal to Jeff Skinner. Skinny thought of a power move around the net but saw Jaccob Slavin coming down hard for the left point. Skinny made a perfect pass to Slavin’s right side that he punched off the right post into the net to get the Canes back in the game. 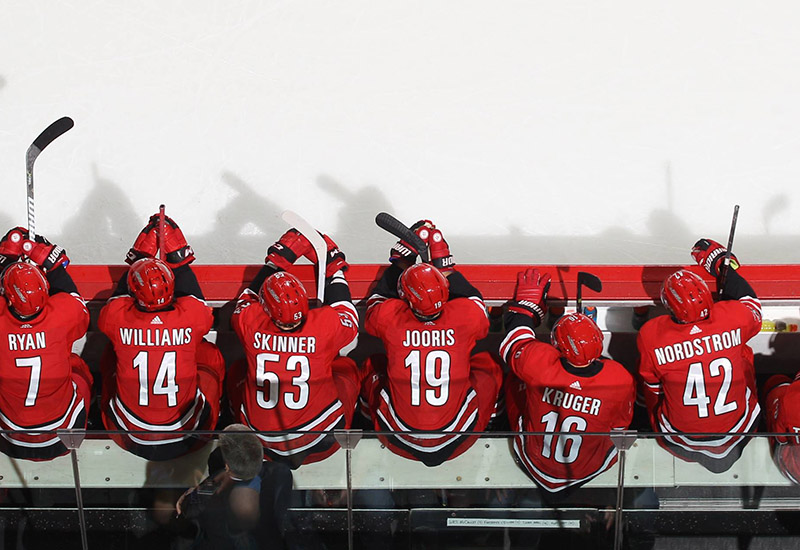 What a Difference a Year Makes

Knights coach Gerard Gallant’s last trip to Raleigh 14 months made NHL news. After a loss to the Canes, not only was he fired, he was forced to take a taxi to the airport to get on a commercial plane. Hands down, he’ll be the Jack Adams trophy winner for the best coach this year. He has this team skating and grinding every shift.

One noticeable difference between these two teams was the amount of movement in front, around, through and in the crease. This game saw plenty of white sweaters in front of Darling or Ward and very infrequent red sweaters in from of Marc-Andre Fleury. The Knights’ James Neal added his 21st of the season  for the only score in the second. Ward’s play in the second was outstanding as he made several key saves doing what he could to keep the Canes in the game.

Know When To Fold ‘Em Should Only Be in Cards

All bets were off for the Canes to make a comeback as the Canes just flow out did not show up in the third. Midway in the period, after a failed attempt by the Canes to clear the puck in their end, Miller scooped the loose change and gave a perfect feed to Brendan Leipsic going hard to the net with Roland McKeown draped all over his back. Leipsic simply redirected the hard pass past Ward to end the scoring. The Knights are a team built very much like the Canes. No real superstars, no huge goons, both teams play a disciplined style but the big difference in this game was heart and movement.

Starting next Tuesday, the Canes embark on a season-long, eight-game home stand. If there ever was a time for “home cooking,” now is the time.  The Canes need at least 12 points and with some key opponents in that mix, getting 12 or even the 16 points, can make or break the Canes season. 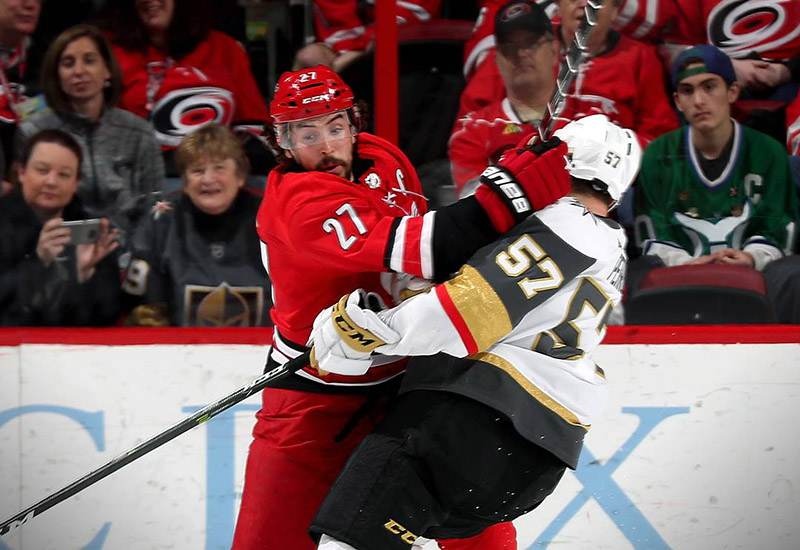