Cary, NC – This was a busy and eventful week.

It started by contacting all council members to hear of questions or concerns they may have had with Thursday’s agenda. The only questions were about the rezoning conditions in the Columbia Development proposal. Later in the day I met with staff to go over the agenda items. We believed the meeting would not have that many speakers and in turn would not be a long meeting.

Afterwards I met with the manager for my weekly one-on-one. We were joined by the Deputy Manager, attorney, and Mayor Pro-Tem. We mostly discussed the Columbia Development proposal and that process.

Tuesday I attended the visitation of Daphne Ashworth along with hundreds of other people from Cary. Daphne and her husband and Ralph founded Ashworth Drugs in 1957 and Lynn’s Hallmark Shops in 1969. She stayed active in local organizations all of her life and was a member of the Cary Woman’s Club, the Cary Jaycettes, a founding member of the Cary Library, a docent at the NC Museum of Art, a founding member of the Heart of Cary Association, Hallmark Cards National Advisory Board, Wake Med Foundation Board, Cary Chamber of Commerce Board, NC Pharmacy Ladies Auxiliary Board president, a founding patron of the Cary Debutante Ball, Cary Visual Arts Board, the Page-Walker committee, and long-time supporter of the Dorcas Shop and the YMCA of the Triangle. Daphne and her husband Ralph have been honored many times by several organizations, including Cary Citizens of the Year, Cary Chamber of Commerce Business People of the Year, and Cary Hometown Spirit Award. She and her beautiful smile will be sorely missed. Rest in Peace Daphne!

Wednesday was a big day for me. It started with my annual State of Cary address as part of the Cary Chamber’s Breakfast which was held at the Prestonwood County Club. This was my 11th address and I believe my biggest crowd ever. Last I heard over 260 were in attendance. My topics (in order) included population and growth rate, accolades, finances, championships returning to our sports venues, jobs, rebranding, downtown, stormwater, the Eastern Gateway, development west of highway 55, transportation projects, parks, fiber installation, the opioid crisis, and resisting divisiveness that is crippling our state and nation. Questions afterwards included how the town could help businesses, what is being done about growth, and the current status of our water. My talk including questions lasted a little over 30 minutes which was a bit longer than I planned. The presentation was well received and I was humbled by the standing ovation.

Wednesday afternoon I attended a meeting of the CAMPO (Capital Area Metropolitan Planning Organization) representing 30 governing bodies. The meeting started with a public hearing on an amendment to the Transportation Improvement Plan. Next I was honored to be elected chairman and took control of running the meeting. The regular portion of the meeting included nine items. All of those items were for information only except two. The board approved the fiscal year 2nd Quarter project amendment list and also approved a compromise recommendation of SPOT (Strategic Transportation Prioritization) projects. This compromise removed some of the CAMPO BRT (Bus Rapid Transit) projects to allow DCHC (Durham Carrboro Chapel Hill Metropolitan Planning Organization) to have less competition and increase their chances of being fully funded for their light rail. The removed BRT projects will be funded by other means. The DCHC Chair and Vice Chair were on hand to make comments and thank the board for helping their efforts. Our meeting concluded after a little over an hour and a half.

Thursday the council held its last regularly scheduled meeting of January. The agenda included 12 consent items, 2 public hearings, and 3 discussion items. There were no speakers at the Public Speaks Out portion of the meeting which is rare. In addition, the only speakers in the Public Hearings were the applicants. Again, that is rare.

The council made several comments about the Gordon Street and Maynard Rezoning proposal. Most believe the proposal should coordinate with the adjacent shopping center which is starting to redevelop. Other comments included the need for more conditions to ensure this rezoning would protect the neighbors. This rezoning will come back to council for a vote after review and recommendation by the Planning and Zoning Board.

Under the discussion items council unanimously approved the Fiscal Year 2018 Street Improvements Project list and the Wake County Hospitality Tax Funding Application without very much discussion. The last item on the agenda was the Fenton mixed use development. Council spent their time praising staff and developers for bringing this rezoning proposal with one hundred zoning conditions. When this is built it will be the largest development in the history of Cary. Over the next several weeks the developer and staff will work out the details of a Developer Agreement which is a condition of the rezoning. This agreement will help ensure that both parties work together to create the vision approved for this area. The meeting concluded after less than two hours. 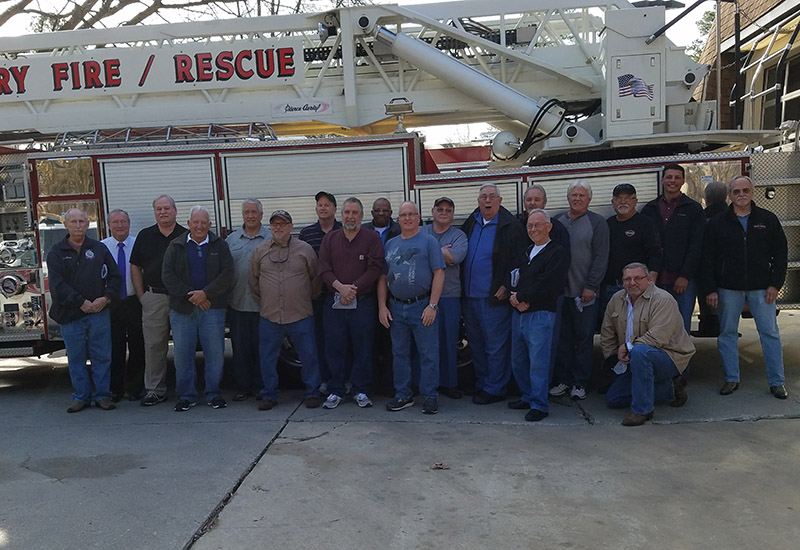 Saturday I joined council member Smith at Cary Fire Station #9 for the retiree’s breakfast. Firefighters from as far back as 1967 and as recently as hired last month, joined us, along with members of the Parks and Recreation and Cultural Resource’s administration, the Town, and other Firefighter companies. This was put on by Bradford’s Ordinary Fire Company which is a 501C3 created by Cary Firefighters with a focus on serving those people in our community suffering from hardship whether emergent or chronic. 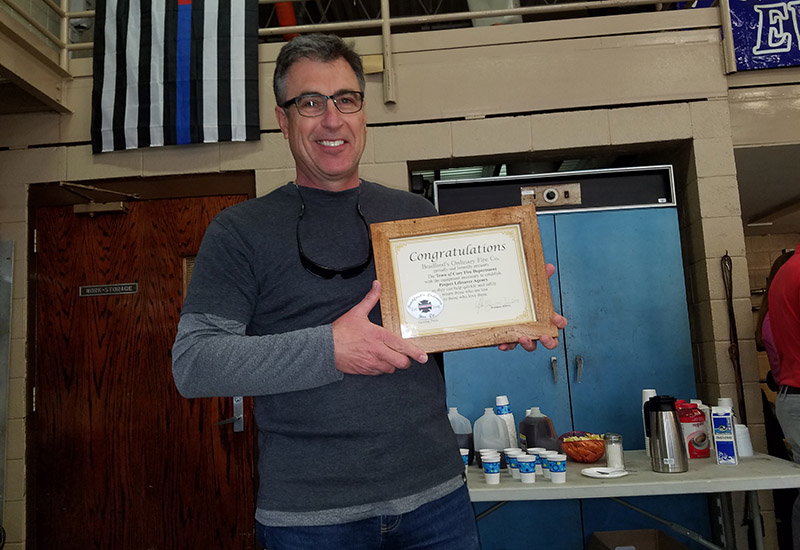 This year, their fundraising efforts included the Town of Cary Fire House Marathon, the Bradford’s and Bond Brothers Beer and BBQ Ball, the Bradford’s Ordinary Golf Classic, and countless other events. This year’s grants went to three organizations. The first was for $2,500 to an annual scholarship fund for Town of Cary PRCR Camp Experience for underprivileged kids. The second was $6,500 to the Miracle League Baseball of the Triangle. This money goes to uniforms, pictures, and material support to bring the joys of baseball to those cognitively- challenged kids of the Cary area. The final recipient was Project Lifesaver. This is a program that uses radio frequency technology, tactical search and rescue training, Police, Fire, and community partnerships to reduce the search times for at-risk populations from hours to minutes – thereby reducing the chance for injury or worse in this special community. This grant will be used to place radio receivers on four different fire apparatus, give training to a large swath of the fire and police department, start a scholarship program for users, and create a tighter relationship between the caregivers of this population. I am so grateful that the Bradford’s Ordinary Fire Company and all they do to serve our community now and as we move forward in to 2018. 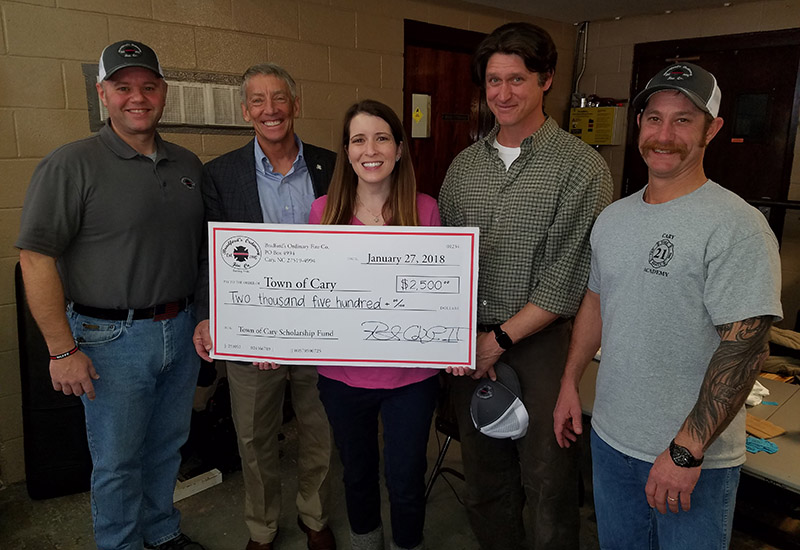 On Wednesday morning, Mayor Weinbrecht delivered his annual State of Cary address to the Cary Chamber of Commerce at Prestonwood Country Club. The Mayor highlighted many of Cary’s successes over the past year, including the diversity of accolades that collectively make Cary an amazing place to live work and play, the excitement happening in Cary’s downtown, and the upcoming opportunities in the Eastern Cary Gateway. He also took a moment to remind everyone the importance of working together and finding common ground, regardless of political persuasion, for the betterment of the community.

The Garage group returned to host the last Chatter 101 workshop for all employees. The Garage group is a community of staff interested in challenging convention, exploring new technologies, and aren’t afraid of failure. Over 200 employees attended the series of workshops, which taught users the basics of the Chatter platform. The workshop was also live-streamed so Fire staff could participate from their district locations. Kudos to presenters Jennifer Warner, Reid Serozi, Cailen Waddell, Cara Conner and Lenny Lloyd as well as several others who worked behind the scenes to help make these workshops come to life!

Congratulations to Mayor Weinbrecht for being elected Chair of the CAMPO Executive Board at the meeting on Wednesday. The board is comprised of approximately 30 elected officials and stakeholders representing 5 counties and 18 municipal jurisdictions. Other meeting highlights included presenting the FY19 draft Wake Transit work plan, which includes new bus service on Weston Parkway, Cary’s regional operations and maintenance facility, and free fares for riders under 18. The work plan’s public comment period extends through March 12 and can be found here. The FY19 recommended LAPP grants were also presented to the board. The vote to approve the recommendations will occur in February. Four Cary transportation projects are recommended to receive $6.3 million in LAPP grants:

On Wednesday, Town staff gathered to celebrate the one year milestone of the Imagine Cary Community Plan. Reaching the visions outlined in Imagine Cary will continue to be a journey. To do so will take the continued efforts of the PIT Crew team to prioritize our implementation strategies, aligning our LDO with ACT chapter refinements, and of course, continuing to work as a team to keep Cary great. Thank you to Council for setting us on the course to achieving the vision!

Terry Yates presented a session titled “Smart Cities of the South” at the IoT Evolution Conference in Orlando, FL. The presentation focused on the Triangle’s smart city change agents, regional smart city initiatives, and showcased a variety of Cary’s efforts. Special thanks goes to Emily Barrett and Sarah Braman for helping with the content of the presentation.

We’d like to congratulate Len Lloyd (Public Works- Facilities) for being elected Vice President of the American Public Works Association’s North Carolina Chapter’s Facilities and Ground Division. Thank you Len for representing the Town of Cary with your great work and contribution to our organization!

Well, that is all for this week. My next post will be on Sunday, February 4th.  Although I have Facebook and Twitter accounts those are not the best means of communications with me. Please send all Town of Cary questions or comments to Harold.Weinbrecht@townofcary.org and email personal comments to augustanat@mindspring.com.