Cary, NC – The Carolina Hurricanes had a bad weekend at home. If it wasn’t hard enough losing to the New Jersey Devils, the Canes lost their playoff spot in a non-scoring game against the New York Islanders.

The Canes laid a big ole goose egg against the Islanders losing 3-0 in a game they could not afford to lose on Friday night. After losing to the Devils in New Jersey the night before, the Canes put two sub par, back-to-back performances at a bad time. Now that divisional and conference play heats up, each game takes on a whole lot more regarding the standings. It’s natural, on the outside looking in, to do scoreboard watching and last night was about as bad as it gets. The Canes losing to the Islanders who leap frogged the Canes, but Philly and Columbus played an overtime game allowing both to gain points.

Caniacs Hope For a Chance With Ward

The Canes came out in the first with speed and trying to rid themselves of the bad game the night before. During the introductions, the Caniacs felt they had a chance to better their playoff position with Cam Ward in net, as once again, the loudest cheer was when Ward-o was introduced. Much of the game was up and down the ice, with little play in the neutral zone.  It seemed the Canes would get two shots off to the Isles’ one. Big difference is the shots on Thomas Greiss were not challenging while Ward was forced to make key saves.

Greiss is having a horrible year and while he has more wins than losses, the stats show he’s allowing more than four goals per game and has a save percentage even lower than Darling’s. The Canes moms were in attendance for the second game in a row and not sure who will give a harsher tongue lashing after two poor performances in a row: the moms or coach Bill Peters. This was the first moms trip for the Canes and the moms absolutely loved it. Not only was it a great opportunity to meet other hockey moms, they got a great taste of the Cary-Raleigh area and all commented what a first-class organization their sons play for.

One other key person in attendance: Tom Dundon, the new majority owner. I could be wrong, but I don’t think Dundon has been in attendance when the Canes have won a game. That alone just can’t be good for anyone getting a paycheck from the Hurricanes. 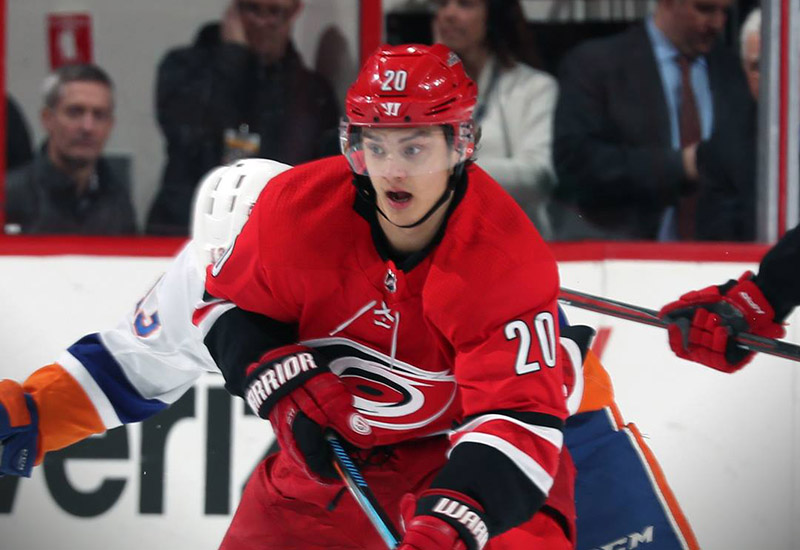 The second was sloppy all around. Unlike the first, early in the second period, much of the play was in the neutral zone with a simple bump the cause for a turnover. Jeff Skinner was one player that was having a decent game. Justin Williams was another, digging and hustling every shift. As stated in an earlier article, Skinny’s defensive play has gone up a few notches this year. He has always been a team leader in takeaways and he was stellar in stealing the puck in this game, blowing everyone away with five takeaways. He uses one of the shorter sticks on the team and in some checks, he uses his stick almost like a pry bar and somehow comes away with the puck.

In the middle of the period, Johnny Boychuk had the puck on the right point and saw a teammate fighting for position in front of Ward. Boychuk shot the puck before it was settled sending an end over end knuckleball to the net. Honestly couldn’t tell if it tipped off Noah Hanifin’s back or went directly into the net. Doesn’t matter, it went in putting the Isles up 1-0.

Later in the period, one of Ward’s best friends in the NHL, Andrew Ladd, had a partial breakaway approaching Ward on the off wing with speed. Ladd just knew he’d finally have bragging rights but Ward-o shut him down with another good save, hugging the post and clearing the puck.

If anything, Greiss may need a new sweater after the game; of the 44 shots the Canes sent his way, at least 35 hit the logo in the middle of his chest. Early in the period, with a pile of bodies in front of Greiss, Jeff Skinner tied the game with a shot from three feet out hitting the inside top of the net.

Or did he? Islander coach, Dough Weight, a member of the Canes’ Stanley Cup team, asked for a coaches challenge for a potential offside. Replays upheld the challenge as a Cane player’s skate (I believe it was Skinner’s) was raised a nanosecond before the puck crossed the blue line. Right call, but what a back breaker.

Shortly after that, Justin Faulk mishandled the puck at the blue line, allowing Anthony Beauvillier a breakaway along the far side. Hanifin did nothing short of mug Beauvillier, first catching up to him then bear hugged him to the ice. Through shear determination, Beauvillier somehow not only got a shot off, but got past Ward, five hole, for the goal, taking the air out of every Caniac in attendance.

After Ward was pulled for the extra skater, All Star John Tavares had the puck and had a player to his left for a choice to put in an empty netter however a Cane tackled Tavares and according to NHL rules, was allowed a goal without a shot when the goalie is pulled and had an empty net opportunity. A good rule considering what could happen if that wasn’t in effect.

Canes Score to Force OT, But Lose 3-2 to Devils

For the second time in 4 days, the Hurricanes lost to the N. J. Devils, this time by a 3-2 score in overtime before a sellout crowd. The Canes did not take advantage of the Devils playing their third game in four days, including a game just 22 hours before and also without their second top scorer Miles Wood who was suspended for a bad hit the night before. The Devils matched the Canes in the energy level in the first two periods, which wasn’t what the Canes expected nor could afford.

Coach Bill Peters shuffled lines again along with bring up Lucas Wallmark from the Checkers and having Lee Stempniak sit out. Probably a 50-50 call that Stemper may get traded at the deadline but with his injury holding him out for the first half of the season and his lack of production, not sure what GM Ron Francis could get in return. Then again, outside of Jeff Skinner, Cam Ward and Noah Hanifin, none of the other first rounders have been having career years.

Cam Ward was challenged early making a quick pad save off a slap shot by Andy Greene that Ward still directed to the near boards where Hanifin was able to control the puck for a clear. It was a rare night that both Brett Pesce and Jaccob Slavin had penalties with Pesce drawing a holding call against him midway in the period. Whether it was a bad forward line change or the Canes were napping, but Sami Vatanien was wide awake as he sent a blue line to blue line pass to Nico Hischier. Hischier, the #1 pick in June, fumbled the pass then kicked the puck to his stick then sent a shot just inside the far post that was a nice shot but one Ward would take ownership for letting in.

Slavin got called for a trip five minutes later in the defensive zone that was questionable. Blake Coleman had the puck in the corner and looked like he was going down on his own, either catching an edge or a rut but Slavin’s stick did hit his boot for a ticky tack call that was an indication of how the officiating was going to be for the Canes. The Canes bore down and killed the penalty with just one weak shot on goal. 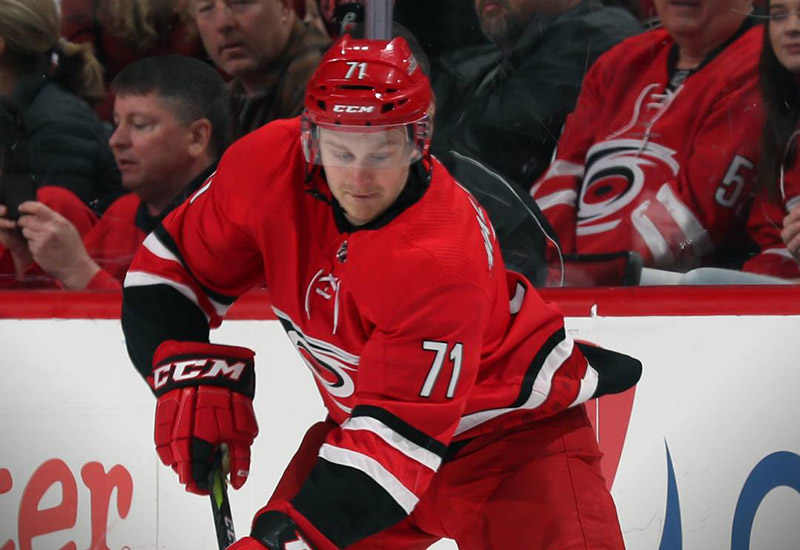 The Canes tied the game at the 6:05 mark of the second on shear determination by the newly created Nordic line of Sebastian Aho, Teuvo Teravainen and Victor Rask. After a rare forechecking play in the offensive zone by Rask, Teravainen got a shot into traffic, Trevor van Riemsdyk picked up the rebound and got a shot off, Rask got that rebound and skooched the pass over to Teravainen whose shot bounced off a defender’s leg into the net to tie the game.

After the ensuing faceoff, the Canes got the puck deep in the Devils’ end. With the puck sliding behind Keith Kinkaid, Jeff Skinner was attempting to go for the puck when he was held along the boards. Skinny was jawing to the ref about an obvious missed call. Skinny continued the interference lesson during the TV time out, and just like the coach in baseball arguing a play that’s never over turned, he’s arguing for the next call. With Slaving serving his second penalty of the game, the Canes had an excellent chance for a short handed goal. After a nice block by Haydn Fleury, Jordan Staal and Brock McGinn teamed up and had a partial two-on-one.

Staal passed off to McGinn and just as he did, Jesper Bratt made sure Staal wasn’t going any further up ice. McGinn got the shot off, narrowly missing the upper corner. Later in the period, Justin Williams had a sloppy pass to Derek Ryan in the neutral zone. With pressure bearing down, Ryan made a blind pass to a non-existent defender allowing for a three-on-one with Pavel Zacha picking up the loose chance and selecting John Moore as the recipient of a pass to an open net to put the Devils up 2-1.

Getting three passes in a row was a rare thing for the Canes throughout the game and that trend continued into the third. Coach Rod Brind’Amour was leaning over more players shoulders either giving advice or advising what time workouts in the gym would be if things didn’t change. It could have been either but things did change for the Canes. Passes were on the tape and most were of the Ron Hainsey type: hard and crisp.

Midway in the period, whether it was the result of the rules instruction Skinny was teaching early in the game or just another sub par performance, but after getting clipped in the face with a high stick drawing that penalty, Skinny was assessed an interference penalty that after several looks at the replay, I can’t see how that call is made.

The Canes pulled Ward with a little over two minutes left for the sixth attacker. The Canes possession was finally a thing of beauty. Pesce kept the puck in at the far side, passing over to Slavin. Slavin deaked around a forward sending a shot to the net.  Skinny was camped out off the right post picked up the rebound, forehand to backhand slipping the puck behind Kinkaid to tie the game.

Canes had most of the possession in the overtime but Taylor Hall, used Hanifin as a screen sending a shot to Ward, just like coaches in every sport teach: follow your shot. Hall followed the shot and while Ward made the initial save Hall pushed the puck in five-hole to win the game.

Hard loss but the Canes are still in the playoff race tied with the Islanders for last wild card spot.

Next game is Friday, February 23, 2018 against the Penguins in a Homegrown Series games. Be there!