Cary, NC – The latest Cary Town Council meeting saw many comments for and against a proposed hotel on North Harrison Avenue, as well as an important vote on the new regional library in Downtown Cary and more.

Of the six Public Hearings at the Thursday, February 22, 2018 Cary Town Council meeting, only one saw comment from local residents. However, this one hearing more than made up for it with 19 speakers on both sides of the issue.

The hearing in question was about a rezoning for a 7.2 acre property off of North Harrison Avenue, adjacent to the Arboretum, to become a Mixed Use District. While the property is currently zoned Residential (R-40), it is inside of a mixed use activity center and the Cary Community Plan calls for this to be a commercial area instead of residential.

The plan is to rezone the property for hotels. The original plan called for three hotel buildings with 350 rooms. After meetings with residents, the plan has been changed to two hotel buildings with 252 rooms and a maximum height of seven floors. There is an 80 foot Type A buffer on the side of the site parallel to North Harrison. Two traffic mitigations are proposed by the applicant: one at the entrance and one farther down on North Harrison. 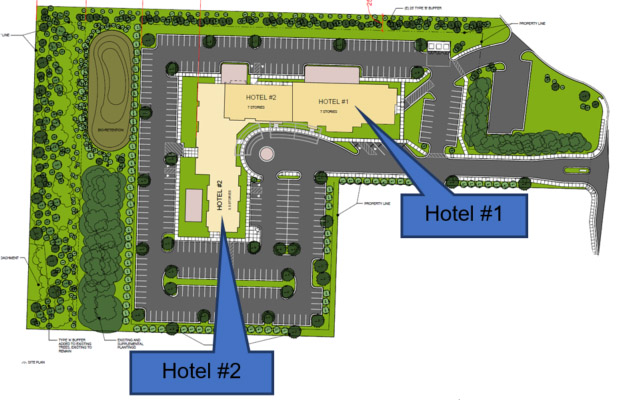 Of the 19 speakers, seven were opposed to the plan. The reasons given were primarily traffic concerns, as North Harrison Avenue is a major road and connects to both employment centers and residencies. One of those speakers was the Head of School for nearby Cary Academy, who had concerns for students walking between the school and the Arboretum. Related to traffic concerns were fears a project of this density would put too much strain on the road infrastructure, with one speaker also saying water pressure was currently strained in the area as well, although town staff said there had not been water pressure complaints filed around here. One speaker represented the legal interests of an adjacent property owner and was concerned how traffic out of the hotel would pass through that property.

Of the speakers in favor of the rezoning, six were with the applicant or was the property owner in question. The applicants are part of the Daly family with Daly Seven Hotels and many speakers talked about the high reputation of the hotel management company, although the applicant cannot be considered in a rezoning vote. Two of these speakers were transportation and civil engineers, who said a hotel would generate less traffic than any other use in this area and said the proposed entryways had been approved by both Cary staff and NC DOT.

Other speakers in favor said the area needed more hotels and it would be a good fit here. The Arboretum’s property manager also spoke in favor and said the hotel would generate more business for the shopping center.

There were also two speakers who were not clearly for or against the project. They were from the Black Creek Water Shed Association and said the applicants talked with them about how to best protect the local waterways and reduce storm water runoff (there are stream buffers inside of the property). Both speakers said their talks with the applicants should be an example of this kind of partnership and suggested they made progress.

Once the Public Hearing was over, the Cary Town Council said they wanted to see more information about traffic flow in the area but reiterated that this spot is planned for commercial development and not residential. The plan was then sent to the Planning and Zoning Board for their recommendation.

There were five other Public Hearings that saw no public comment and there was no one at Public Speaks Out either.

Four of these were for annexations in Cary. Two of these had a vote at the meeting itself, with a unanimous vote for small property across from Macedonia United Methodist Church on Tryon Road and a 6-1 vote for two lots south of Green Hope High School, which needs to be annexed before a nearby townhome project can get underway. The one “no” vote was Councilmember Jennifer Robinson.

The annexations that were referred to the Planning and Zoning Board were a tiny annexation for part of a road that leads into Alston Ridge Elementary School and a lot on Campbell Road near Swift Creek Elementary School with future plans to make it a mini-storage facility. Councilmember Jack Smith gave the only comments on this annexation, saying the storage facility needs to meet high standards because it would sit at one of Cary’s entrances.

The final Public Hearing was for multiple changes to Cary’s Land Development Ordinances. While many were technical changes for operations, one major change is to introduce a new classification for breweries, distilleries and wineries. Previously, the LDO classified these businesses as “light manufacturing users.”

With this vote, Cary gives $7 million to Wake County for construction of the parking deck. The overall plan for the library is for construction to start this Spring and finish by Autumn 2019. Town Council voted for the amendment unanimously.

The size of this facility would be comparable to Room B at the Herb Young Community Center. Town Council voted unanimously to appropriate $120,900 for the lease. $93,300 will eventually be reimbursed to the town.

Story by Michael Papich. Photos by Google Maps, the Town of Cary and Hal Goodtree.

Canes Forget to Show Up For Game Against Penguins, Lose 6-1
Scroll to top
%d bloggers like this: