Cary, NC – Two weeks after a high-profile school shooting in Parkland, Florida, nearly 2,0000 students staged a walkout at Green Hope High School to call for an end to school gun violence and to demand change from elected officials. 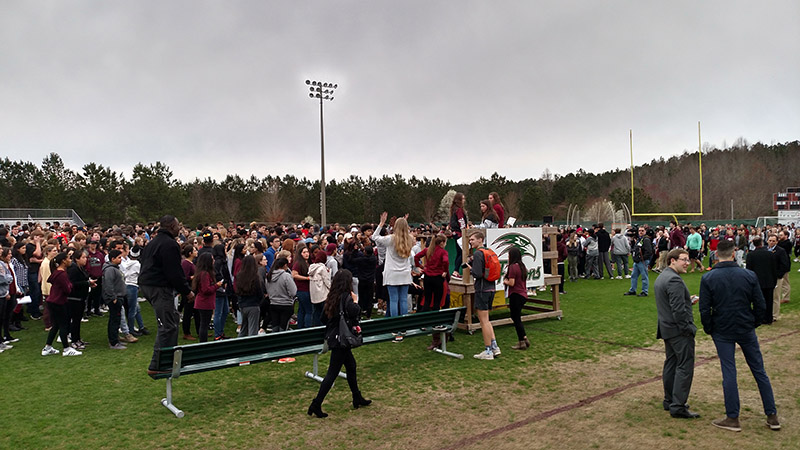 Students at Green Hope High School, organized by the student body government, walked out at noon on Wednesday, February 28, 2018. The demonstration was promoted in a video in advance of the walkout, with news teams from around the region and even a news helicopter coming to cover the event.

The walkout led students from the school doors to the football field, with many carrying their own signs featuring slogans such as “Change Starts Now,” “Enough is Enough” and “Am I Next?” 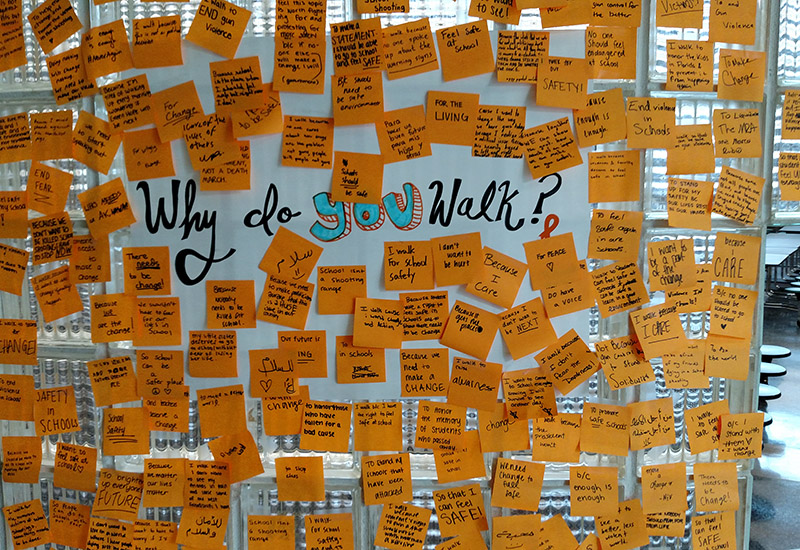 Once on the football field, speakers from Green Hope High School as well as local elected officials spoke to the gathered crowd. Among the students were Deb Bhattachanya and Megan Sharma, who both attended Marjory Stoneman Douglas High School in Parkland, Florida – the site of the Wednesday, February 15, 2018 shooting – before moving to North Carolina.

Both described feeling a mix of fear and anger after the shooting, where people both students knew were killed. Bhattachanya said the Cary-Morrisville area feels like Parkland, as it also felt like a safe enclave until violence struck the Parkland community. Sharma said everyone plays a part in stopping gun violence, from schools to legislators to students.

Green Hope first-year and sophomore class presidents Megan Mou and Raina Lee also spoke to the gathered students, with Mou calling the Parkland shooting “the last straw that broke the camel’s back.”

Regardless of political affiliation, Mou said, everyone gathered wants to end gun violence at schools. She and the organizers contacted elected officials from all levels of government and political parties to join them at the demonstration.

“Not every adult has opened their minds to our young voices so we appreciate those who came out today,” Mou said.

Lee said each mass shooting can feel like another statistic but said the students unifying despite different political beliefs and interpersonal relationships can lead to change. Lee also said contact information for North Carolina elected representatives would be distributed to students and encouraged them to reach out.

“Now there is no excuse, because you have heard us,” Lee said.

Cawley, who has a daughter attending Green Hope, spoke to students about frustrations they may feel since they cannot vote but decisions are still being made on their behalf.

“But here you are, starting the wave to change that in a big way,” Cawley said, before crediting the students for taking action because “power does not come to those who wait for it.”

Rao, who also has a daughter at Green Hope, called the gathered students brave but said ordinary people stand up in dark times, referencing the legacies of Mahatma Gandhi and Martin Luther King Jr. Rao said he also has fears about gun violence in schools.

“Lately, I’ve wondered if when I drop off my kids at school, if it’s the last time I’ll see them,” Rao said. “It’s scary.”

Chaudhuri talked about his time as an attorney general before becoming a state senator and the response to the 1999 Columbine High School shooting. Those responses were more safety protocols in schools but Chaudhuri said more changes need to take place in Wake County and North Carolina to prevent future shootings.

Among the policies Chaudhuri cited as steps to end shootings were more funding for school nurses and school psychiatrists to pick up on early signs of violence, judge-ordered suspensions for people deemed a danger to the community and expanded background checks to buy firearms. Chaudhuri also encouraged students to demonstrate at the General Assembly when it is back in session.

“We don’t need more voices of adults like me in the General Assembly. We need voices of students,” Chaudhuri said. 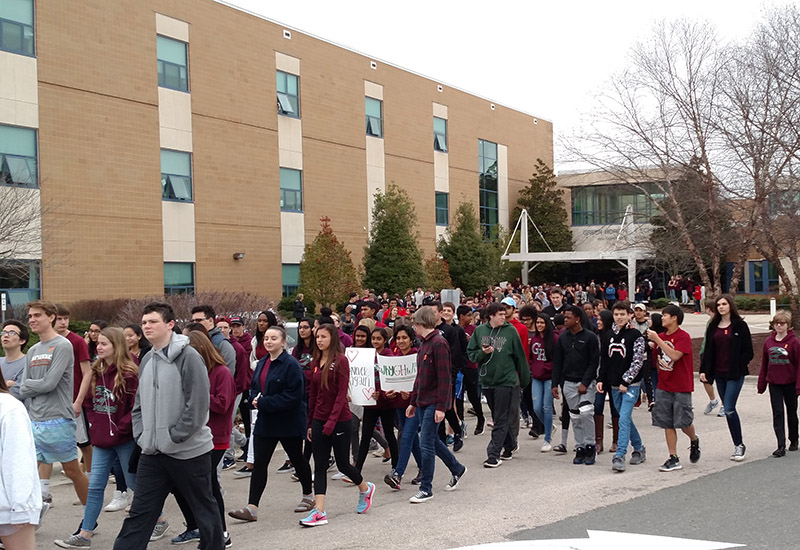