Cary, NC – The Carolina Hurricanes had to win out their last five games while hoping the New Jersey Devils lost their last five games. But the loss to the worst team in the NHL in 2018, the New York Rangers, by a 2-1 score put the Canes out of any chance of getting into the post season for the NHL’s “worst” ninth season in a row.

After Scott Darling and the Canes dominated the Capitals in a 4-1 win the night before in without a doubt Darling’s best game as a Cane, the Caniacs have to be asking “where was this guy Darling hiding all year?”

Ward and Lundqvist Are Sharp

Both the Canes and Rangers are young teams with speed but it was the Canes that “started on time” as Coach Bill Peters likes to say. The Canes know the odds are stacked against them but they came out of the gate fast and hungry.

Biggest problem: Henrik Lundqvist was in goal and both King Hank and Cam Ward were the best players on the ice. The Canes had a number of early shots, several grade A shots but Lundqvist was acrobatic and only give up controlled rebounds. Not to be outdone, Wardo was making highlight reel saves of his own, none better than the flying double pad save that had just about had the goal on the scoreboard midway in the first.

Wardo also shutdown Filip Chytil on a breakaway that could have been a game changer as everything was going the Canes’ way in the first. After the save, Jaccob Slavin made a 120 foot pass right to the tape of Jordan Staal who passed to Brock McGinn rushing down the center. McGinn’s stick was held giving the Canes their first powerplay. Lundqvist was the reason the Canes didn’t score as the Canes had good possession and three very solid scoring chances.

Whatever the Canes had in the first was long gone in the second. The forechecking must have been checked in the locker room as it certainly wasn’t on the ice. The Canes owned the neutral zone in the first then handed it over to the Rangers. With a little over three minutes gone and the Blue Shirts pressing in the Canes end, Ryan Sproul took a shot from the right point that found its way through traffic for his first goal of the season since being brought up a dozen games ago.

If the Canes could go to school on one thing, you’d hope it was having bodies in front of the goal may lead to the puck getting by Lundqvist. The Canes got their second penalty after Jordan Staal got tripped in the offensive zone. The Canes dominated the faceoff circle but lost the next faceoff in their own end. The Rangers got a 2-on-1 quick break out with Kevin Hayes tapping in a nice dish pass for the first short handed goal against the Canes at home this season.

The Canes were trying to get back in the game on the powerplay but the big body in front of the goal was Jeff Skinner. He’s as solid on his skates as any player but he’s more effective as a sniper than a jammer. The Canes’ special teams were the difference this game as they just couldn’t get things done. Lundqvist had a lot to do with the Canes’ lack of producing but overall it seemed the team was now a step behind. The checking by the Canes was nonexistent whereas the Rangers were hitting anything in red.  Only highlight of the period for the Canes was Wardo stopping Chtyil’s second breakaway of the game.

The Canes’ play improved in the third, quite possibly by a little encouragement by the coaching staff in between period. Forechecking returned, grinding for pucks in the corners returned and the Canes, early on, appeared to own the neutral zone again.

Just about eight minutes into the period, Klas Dahlbeck sent the puck deep behind the goal. Derek Ryan did a very good job digging and was tenacious on the puck. Just when he was getting double teamed, he slid the puck to Skinny off the left post.  Skinny settled the puck then sent a wrister between the paper thin crack between the post and Lindqvist to get the Canes on the board. The Rangers then went into a defensive shell to hold the lead.

Rarely did the defenders enter the Canes O-zone, camping out on the neutral side of the Canes’ blue line. Any time the puck trickled out, the Rangers defense was all over it, thwarting any breakout by the Canes. Ward was pulled for the sixth attacker with 2:34 left sending out five forwards and Justin Faulk on defense. The Canes made the final minutes exciting but Lundqvist was unbeatable. Another disappointing end to both a game and season.

Expect major changes this summer but the Canes do have one more home game, next Saturday, April 7, 2018 against Tampa Bay. Be there! 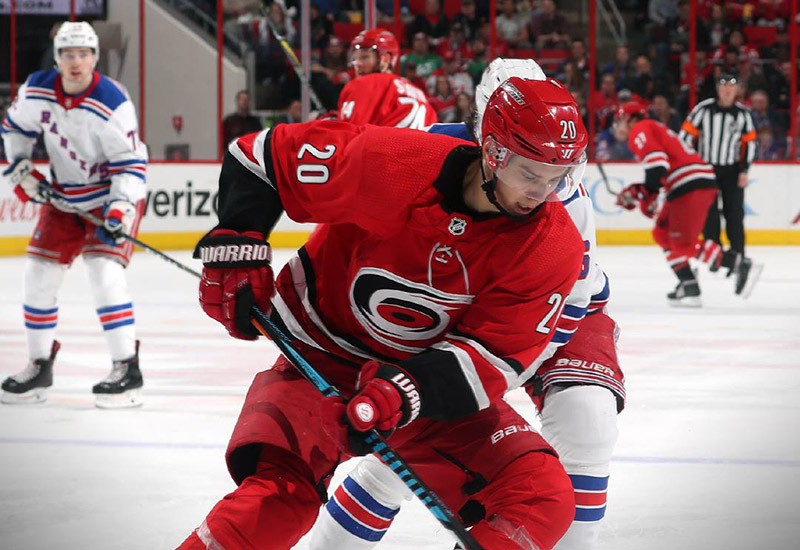