The Discussion Item that saw the most discussion between Town Council at the Thursday, April 5, 2018 meeting was over what payment should go to houses bought up by Town Council for stormwater control. In the Foxwerth Subdivision, several homes on Jodhpur Drive have had significant problems with flooding and stormwater runoff. Engineers with the Town of Cary found improving the nearby culverts would not help because these houses are in a floodplain. The solution is for four of the six houses to be elevated and two will be bought by the town, demolished and then the land converted into revegetated open space, with the homeowners reimbursed for their houses at tax value.

At the Public Speaks Out portion, these two homeowners at 113 and 117 Jodhpur Drive said they understand that these houses cannot be saved but said the tax value of their homes would not be enough compared to the houses’ appraisals. One of the homeowners also had his tax value recently lowered. This question of how to reimburse the homeowners led to debate between councilmembers, as well as Town Manager Sean Stegall who said he did not think the tax value was a good metric for selecting reimbursement but still wanted to bring this vote to the Town Council in order to hear their thoughts on the matter. Stegall also said basing a new policy off of just these two houses would be a bad idea.

Councilmembers Jennifer Robinson and Ken George appeared to be the most vocal when it came to selecting different metrics to reimburse homeowners when buying stormwater-damaged houses. Robinson said appraisals done by Wake County are too old and suggested bringing in two appraisers for each house and getting an idea of what to pay based on their assessments. Both acknowledged the payments are not meant to make the homeowners whole but said it was a question of fairness.

On the other side, Councilmembers Don Frantz and Jack Smith said the question of fairness falls with the previous seven homeowners who have gone through this process.

“We have seven other houses who were bought at tax value. Would it be fair to them to change that?” Frantz said.

Frantz also looked up the most recent appraisal of one of the houses from 2015 and said he thought that price took flooding into account so he questioned whether appraisals are out of date or not.

Over time, several councilmembers also got frustrated with the idea of coming up with individual payments for these homeowners on the council floor. Stegall said he wants guidance from Town Council on how to reimburse homeowners.

“There may be numerous houses bought in the future and we need a standard and not a case-by-case approach,” Stegall said.

Town Attorney Christine Simpson said the council can vote on this Discussion Item and direct town staff to negotiate a price with the property owners but Smith said, if there isn’t consensus on the Town Council over what that price should be, town staff would not be able to select a price they would all sign off on.

Near the end of the discussion, there was confusion over whether the previous houses bought up operated under a policy to reimburse at tax value or not, which led to a vote to table the motion. The vote passed 4-3, with Frantz, Smith and Mayor Pro Tem Lori Bush voting against.

The only other Discussion Item on the agenda was a summary of the North Carolina General Assembly’s past session and Cary’s goals for the General Assembly in 2018 as well as goals for Congress. From the General Assembly, the only action Cary is asking for is annexation of Laura Duncan Road. This is on behalf of Apex, who want to add a crosswalk here after a boy was hit by a car recently but cannot do it themselves since this stretch of road is unincorporated land.

Federally, in addition to bonds, Cary’s goal is for legislation on sales taxes for online retailers. The idea is that this will help “brick and mortar” stores be competitive. Town Council approved these agendas unanimously.

Of the five Public Hearings on the agenda, the one that saw the most input from residents was a proposal to rezone around 16 acres in the Southwest corner of the NW Maynard Road/Chapel Hill Road intersection. This land is in a mixed use overlay district and the applicants want it rezoned to a mixed use district to put in multifamily apartments, with 259 units in buildings between three and four stories. The applicants are also asking for a 30 percent reduction in surface parking, to not bury existing communication lines and to remove 14 champion trees from the site.

While this is a mixed use overlay district, the applicant’s lawyer Jason Barron said retail on the periphery of Downtown Cary is not ideal and this spot would be better for housing people who would theoretically work in downtown (the site is roughly one mile from Cary Town Hall). Four residents came to speak out against the proposal, two of whom said they were not notified about the Public Hearing because they are outside of the 800 foot limit for notifications but live near the site. Two of the speakers talked about what they described as poor relationships with other previous, nearby developments and constructions that resulted in damage to their homes, flooding and erosion. Other speakers also said this will increase traffic problems that already exist on Chapel Hill Road. There was one other speaker who was a representative for the developer who talked about two stormwater controls they plan to put in place for the apartment complex.

In 2007, there was a plan for a commercial space in this area instead and several councilmembers asked for more information on that plan to compare it to what is being asked for here.

“Is what’s being proposed better than what could come? I don’t know,” Frantz said, before adding that residential uses would generate less traffic than commercial.

With regards to these speakers’ past experiences with construction and stormwater, councilmembers also wanted more information on those situations and said those go against Cary’s standards. But with regards to stormwater protections, Robinson said more can be done.

“We have stormwater conditions that are better than the state’s but it’s not enough,” Robinson said.

Councilmember At-Large Ed Yerha also said this property abuts the land with the Nancy Jones House, which is Cary’s oldest recorded house still standing, and said any development would need to respect that. The rezoning went to the Planning and Zoning Board for their recommendation.

The other Public Hearings on the agenda did not see the same criticism from their speakers. On Campbell Road, there was a rezoning request to change the 2.12 acres of the Campbell Road Nursery and change it to Industrial Conditional Use in order to put in a mini-storage building. The property is being sold by the nursery’s owners who say they can no longer maintain it and are looking to retire.

The conditions would limit this use to mini-storage and also include masonry requirements on the outside of the building. The applicant’s lawyer Jason Barron said this spot has limited access for retail or commercial uses and storage is a low-traffic generator.

There were three speakers, including the nursery’s owners. All three speakers were in favor of the proposal but the final speaker asked for a 35 foot height limit, stormwater controls and was concerned about the rezoning being industrial, even though that industrial use has conditions built in limiting it to mini-storage. With regards to the height, Debra Grannan with the Planning Department said there are already ordinances in place that would limit the height to around 35 feet.

Town Council sounded generally in favor of the proposal and thought mini-storage was a good use in this spot but several brought up frustrations that past storage units that they approved had large windows and the interior could be clearly seen and did not fit their aesthetic goals. The proposal then went to the Planning and Zoning Board for their recommendation.

The only other rezoning Public Hearing is for part of the Cary Medical Park to go from General Commercial Conditional Use to a Mixed Use District. This will replace the buildings in the 10.5 acres being rezoned with two four story medical buildings with more than 240,000 square feet of medical office space. There would also be two parking decks. The applicants are also asking to go outside of Cary’s architectural guidelines to give the offices what they described as a modern look.

There were no speakers at this Public Hearing but Town Council seemed favorable.

“Cary is growing and the need for medical services here is growing too,” Frantz said. The proposal was sent to the Planning and Zoning Board for their recommendation. 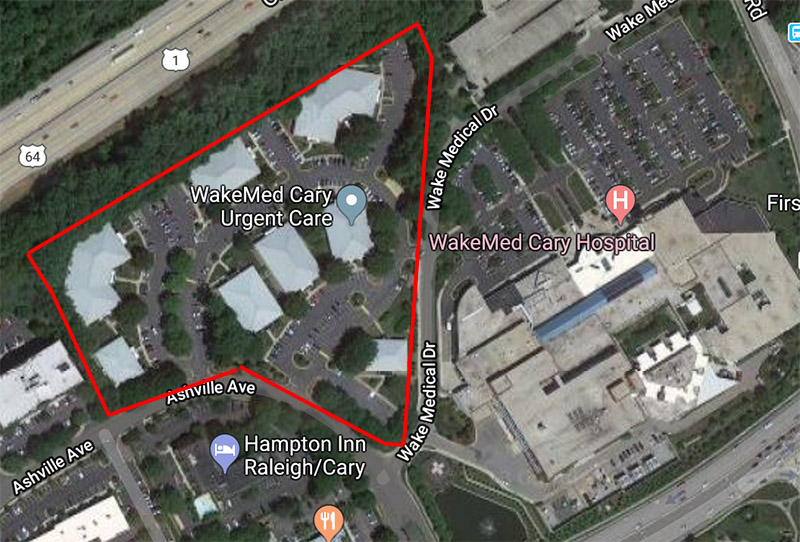 This meeting also had the final Public Hearing for the FY 2019 Community Development Block Grant Annual Action Plan, which helps Town Council decide how these funds will be used. The only speakers were two representatives from The Carying Place, who asked for funding for renewing their facilities, which they said are around 35 years old. The Carying Place currenly has five properties and can house 10 families at once. Town Council does not vote on this grant yet.

The only other Public Hearing was for an annexation along NC-55 that had no discussion or public comment. Town Council voted for the annexation unanimously.

There was only one Public Speaks Out speaker who was not talking about the Jodhpur Drive Discussion Item. It was a Downtown Cary resident who expressed concern over the details of the downtown library’s parking deck changing to include more spots. The speaker wanted more details on the new design and also criticized what she described as a lack of transparency on this issue.

PlaySlam is Back with Bigger Budget, Quick Tempo