Cary, NC – When the Triangle made the cut of 20 finalists for Amazon’s new headquarters, there was a lot of talk about what the region could offer the tech giant and what impact Amazon would have here. However, a new business report suggests the local area has a very limited shot at being selected.

In a report by non-profit business research group The Conference Board, new job postings by Amazon were tracked all across North America. Skilled tech workers has been a part of Amazon’s stated needs for any new location since the HQ2 search began.

The Conference Board’s report showed the highest concentration of these job postings in the New York/New Jersey area, Washington D.C., Boston and Los Angeles between December 2016 and December 2017. Additionally, Washington, D.C. and Boston saw a significant percentage increase in the number of ads posted, as did Pittsburgh and Pennsylvania.

Raleigh, however, had zero ads posted here, down from two postings in 2016. The next lowest of the 20 Amazon finalists is Miami, with 15 job postings. While this is only a hint, it does suggest where Amazon is drawing its labor pool from currently and where the company knows it can find skilled employees.

“If we know where Amazon has been hiring in recent years and where it has accelerated hiring, it could provide some hints on where HQ2 might be built,” the Conference Board report says. 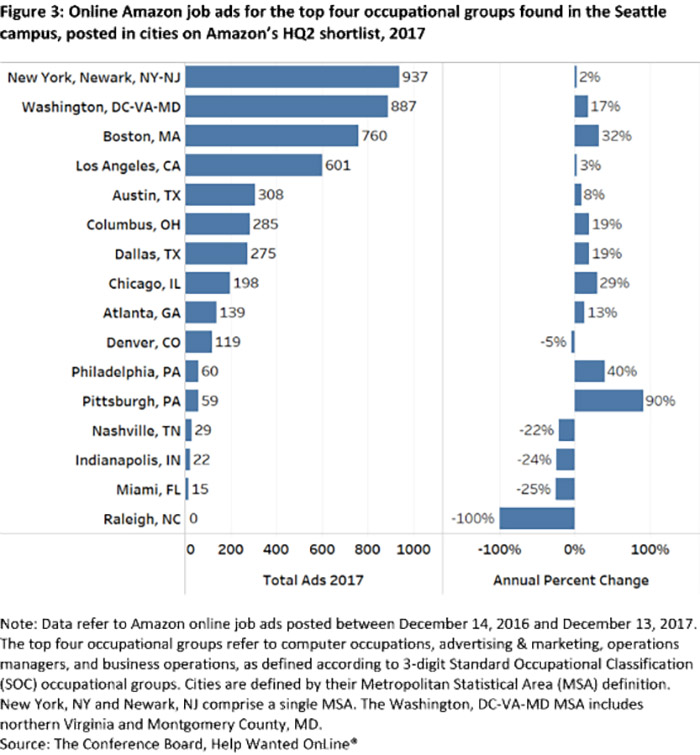 The study measured online postings by Amazon across the country for positions in computer operations, operation management, business operations and advertising and marketing, which are the four most common jobs at Amazon’s Seattle headquarters.

Looking at a map of where these job posting were targeted, even Charlotte had more postings than the Triangle, which is not in contention for HQ2. 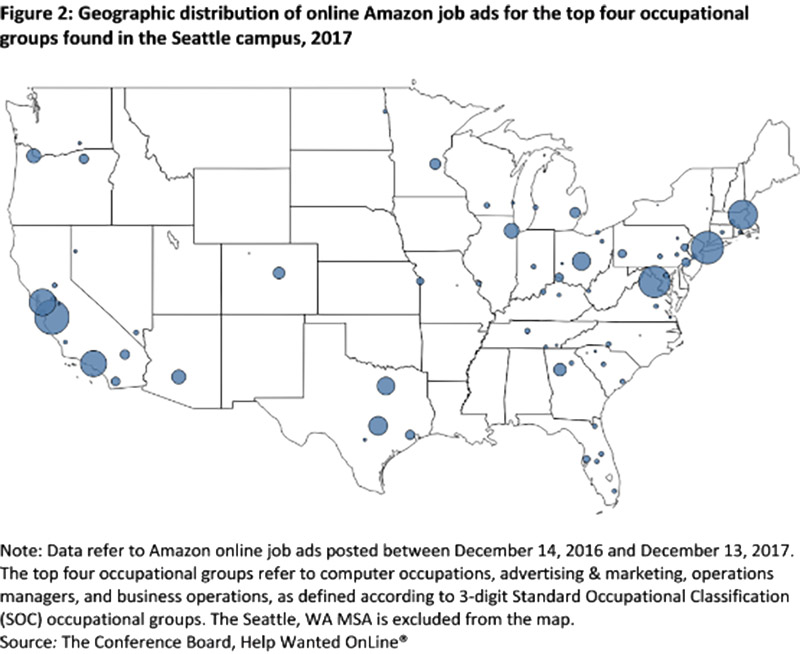 Looking at the Triangle’s Factors

As we cited in an earlier article, business researcher CBRE ranked Raleigh and the Triangle seventh in North America for “tech talented” cities, which would suggest a large pool for Amazon to draw on. However, Washington D.C. was ranked higher and Boston was ranked close by at ninth, both of which appear to be top contenders based on the Amazon job postings.

It’s unclear what impact the unemployment rate has on Amazon’s job posting rates. While Raleigh and Cary have a 4.1 and 3.6 percent unemployment rate respectively, Boston’s is 3 percent and Washington D.C.’s is 6 percent.

If this report’s conclusions can be trusted and Raleigh is not a realistic contender for HQ2, new polling says this is a disappointment for most Triangle residents. A poll by Elon University, commissioned by American City Business Journals, says 79 percent of residents support HQ2 coming here, with 43 percent “strongly supporting” it. The poll also asked if residents would support new taxes to bring the project here and 80 percent said no.

Story by staff reports. Photos by the Conference Board and NCDOT.

NC Courage Draw Against Utah, Their First of the Season
Scroll to top
%d bloggers like this: