Cary, NC – Folks remember some of the history of building YMCAs in Cary.

In the 1980s, my husband, Dick Ladd, got serious about the idea of building a YMCA in Cary. He enjoyed the Y in Raleigh, but thought we really needed one in Cary and that Cary could support it. In the late eighties, his friend and developer, Ray Sparrow, was going to build lots of homes on Cary Parkway. Ray realized that if he donated some land to build a Y, it would help make his new development successful.

So, they started a drive to fund a building, which evolved into many, many months of prayer breakfasts and walking clubs to build up the excitement for a Cary Y. It was built and the ribbon was cut, I believe it was 1992, for the Cary family YMCA. Ralph Ashworth was very supportive as well as the Stephenson family and so many others. It all came together, and we’re very proud of it and the good that it brings. There was a need that was successfully fulfilled. 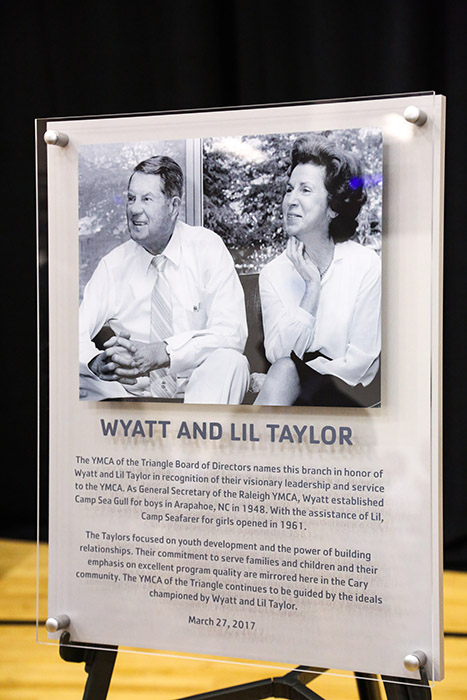 The namesake for the Taylor Family YMCA

I have been on the YMCA board for fifty years. My construction company built the Raleigh Y on Hillsborough Street. Then for ten years, I kept pushing to get a Y in Cary. Finally, I got Dick Ladd to be chairman and we built the first Y. Now we’ve got two Ys and will open the third one in northwest Cary, in partnership with the Crosspointe Church of Christ.

Through the Why Project established by the church, they built the buildings on their land adjacent to the church, and will lease them to the Y. It will be something entirely new. We’re trying to do one like that in partnership with Wake Tech right now.

Today, because it’s so hard to get enough money to buy land and build our own buildings, we’re trying different things. For example, we’ve gone into a shopping center and put some equipment in an empty storefront where you can join and go work out. Of course, there are Y programs in ball fields for the kids. In the Triangle today, we must have 50-60 Ys, and ours is one of the biggest programs in the United States. We started out with just the one on Hillsborough Street in Raleigh.

Story by Peggy Vac Scoyoc. Photos by Michael Papich and YMCA of the Triangle. Much of Cary’s Heritage is taken from the book, Just a Horse-Stopping Place, an Oral History of Cary, North Carolina, published in August, 2006. The book is a collection of oral history interviews conducted between local citizens and Friends of the Page-Walker Hotel. The rest comes from later oral history interviews with local citizens.