Cary, NC – North Carolina FC took on one of the USL’s top teams and both teams fought hard, ending in a draw after a goal in the final minutes.

North Carolina FC took on Louisville City at Sahlen’s Stadium at WakeMed Soccer Park on Saturday, June 23, 2018. Louisville City is the #2 ranked team in NCFC’s USL group with seven wins this season and only two losses and Louisville won the USL Cup last year. Needless to say, they proved tough competition for the home team.

So it was a big boost for the home crowd when NCFC led scoring with a speedy goal in the 11th minute. Kyle Bekker hit a cross to Daniel Rios. One of Louisville’s defenders, Paco Craig, had eyes on Rios but Rios jumped right over Craig and hit Bekker’s pass with his head. The ball bounced off Rios’ skull and soared past goalkeeper Gregory Ranjitsingh, starting the game at 1-0 for the home team.

But the defending league champions would not be put down that easily. Craig came back into the mix and got a pass from Oscar Jimenez and hit a header of his own, hitting the Carolina net and tying the game 1-1.

The hits kept coming as Louisville City’s Ilija Ilic got the ball around NCFC’s line of defense and was within yards of the net. That was all he needed as Ilic scored and got Louisville’s first lead of the game in the 59th minute.

In the final minutes of the game, it looked like this would be a loss for NCFC but Tiyi Shipalane came in as a substitute and in the 87th minute, Rios and Shipalane both sprinted toward Louisville’s net. Shipalane snaked through several Louisville defenders before he passed the ball off to Rios and Rios got his eighth goal of the season, ending the game 2-2. Not a win but not a loss, which is impressive against the defending league champs.

In an interview after the game, NCFC Head Coach Colin Clarke said he thought the team responded “magnificently” to the point gap in the final moments.

“It was probably the first time this year where it’s gone our way in the last few minutes of a game, and what looked like a defeat at one point,” Clarke said. “We got a point. I thought we thoroughly deserved it.”

Rios was a bit tougher on himself and the team.

“It’s a difficult result. It’s good because we were losing – it’s not too bad for us. It’s at home, so we expect to win,” Rios said. “But it’s not a bad result (considering the second-half deficit).”

The next NCFC home game is Saturday, July 7, 2018 against Charleston Battery at 7 PM. 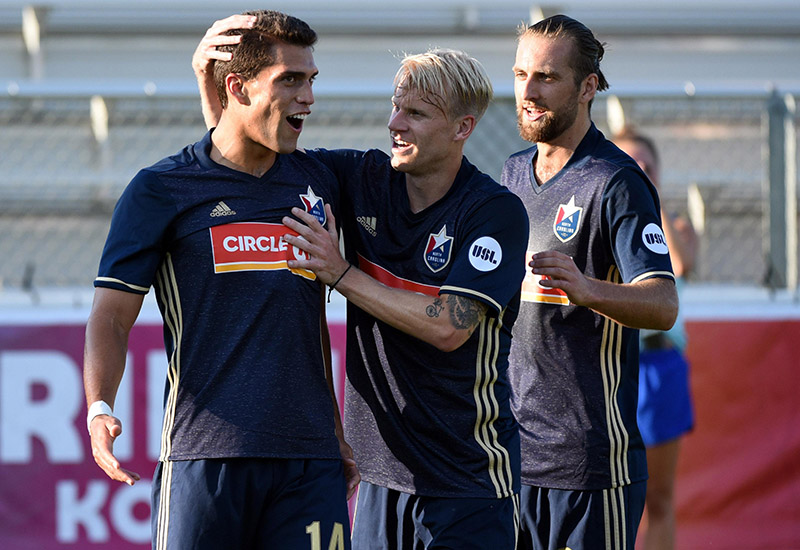 Watching the World Cup in Cary and Morrisville