Cary, NC – This week was a holiday week so there were very few activities.

Monday I met with the town manager for my weekly one-on-one. We talked about several topics including a downtown business and an incident at the last council meeting where someone allegedly paid speakers to advocate for their project.

After talking with the town manager and others here is my understanding incident of the paid speakers. On the evening of the last council meeting someone posted on Craig’s list that they would pay $50 for speakers. During the council meeting this information was being passed around amongst council members but I was not informed.

There were three public hearings but only one had speakers. One can only speculate that the paid speakers were for the public hearing with speakers. That public hearing was a proposal for a hotel with twice the allowed height, no sidewalks, and reduction in streetscape and buffers. (The applicant and the applicant’s representative later both denied anything to do with paying speakers and said it was someone trying to sabotage the proposal.) I was made aware of the incident after the meeting.

Currently, there is no proof of who paid speakers or if speakers were paid. However, I can definitely say this is very upsetting to council and staff. Personally, I always have an extremely difficult time working with anyone who has been proven to be unethical. And if paying speakers is proven to be fact and they can prove someone did this then I will have a very hard time believing any future proposal they bring before council.

Tuesday I was interviewed by the Triangle Business Journal about paid speakers at the council meeting. I provided them the same information mentioned previously.

Wednesday was the annual Fourth of July celebration at Booth Amphitheater. Around mid-day I was notified by the Public Information Officer that Florida Senator Marco Rubio and his family would be attending the Fourth of July celebration and would be seated in three tables behind me. I was informed that he did not want to be acknowledged and wanted to stay anonymous as much as possible. His security detail did a walk through before the gates were opened.

I arrived about two hours after the gates opened in time to watch the performance by the Cary Town Band. What a great group of musicians. And they are all volunteers! My table included my wife, friends, and NC Representative Adcock and her family. As usual I went around and visited various groups of people attending including a group from Japan that comes every year. That group included a senior advisor to the ambassador. I was scheduled to give welcoming remarks a little after 7 PM and then be followed by the NC Symphony. But due to a big thunderstorm I went back to the Crescent and took cover. 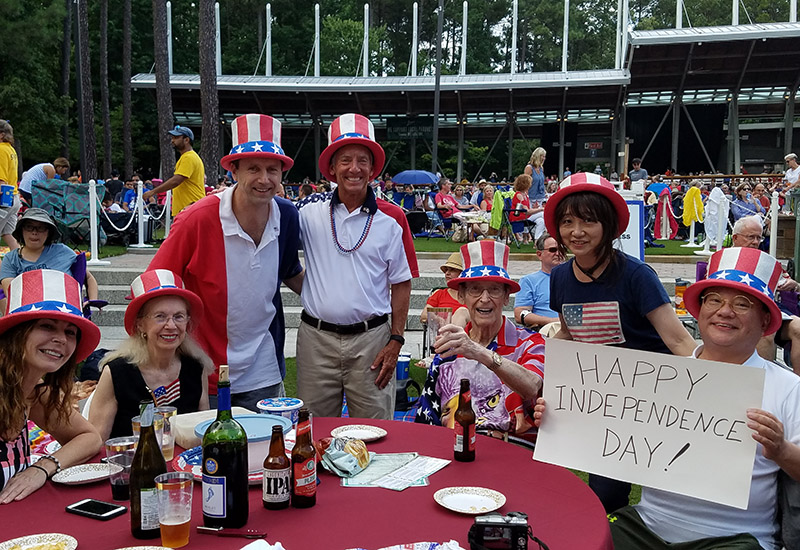 I sat at a table with former Mayor Koka Booth and his guest renowned artist Jerry Miller. We had a wonderful time talking while watching the storm. Cary is blessed to have had him as mayor for so many years. 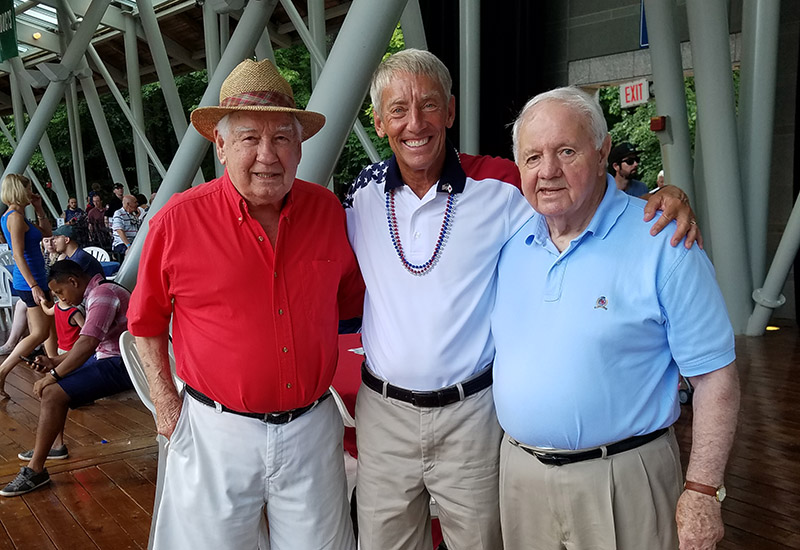 After the storm I provided my welcome remarks. I made a point of emphasizing what is going on in America today by saying: “It is great to know that in a time when divisiveness is gripping our nation that we can come to this beautiful place at this time to celebrate these UNITED States of America.”

During the performance by the symphony and about an hour before the fireworks Senator Rubio arrived with his family and guests. I welcomed him and asked if he needed anything. We talked for about five minutes about local government and Cary specifics. He asked about the population, budget, insurance, number of employees etc. He mentioned that he started in local government and still lives in the town he governed. He also talked about how, at the local level, people want so much but don’t necessarily want to pay for it. We discussed how people don’t vote in local elections, which is the level of government that impacts them directly. 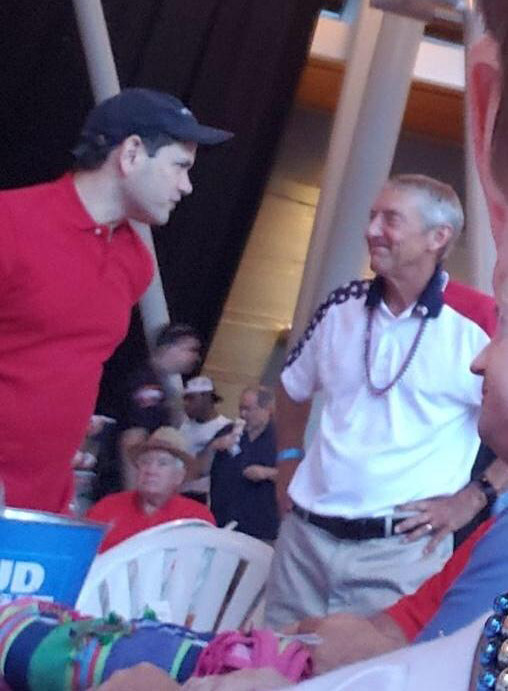 After our conversation one other gentleman spoke with him for about five minutes and then he was pretty much left alone. I was told earlier in the day that Senator Rubio’s group would be leaving during the fireworks grand finale. True to the plan, the senator thanked me for our hospitality during this time and said to come visit him the next time I am in Washington D.C.

I actually was in my car before he left with his police escort. His escort included three cars and two police motorcycle cops. I was asked earlier in the day to leave with that escort. I did but I don’t believe the escort detail knew this since the last police bike was in front of me. I felt like I was chasing them. Anyway, leaving with this escort was an experience since they floored it at every opportunity. At times we reached speeds of 60 mph on Regency Parkway. Needless to say I was at home ten minutes after the fireworks ended.

My Response to Jason Barron

Mayor and Council – Below you will find my response to Jason Barron in regards to the online ad for paid advocates at last week’s Council meeting. As background, I’ve attached the email I received from Jason on behalf of Morningstar Law Group earlier this week.

Thank you for time this morning.  As discussed, Morningstar Law Group and East Coast Hospitality – the applicant in the Weston PDD Amendment ‐ are appalled at the “Paid Advocate” advertisement that was posted on Craigslist last week.  Our team had absolutely nothing to do with that ad.  It is the first time in my 16 year career that I have seen anything along these lines.  It offends my sense of right and wrong, and it has absolutely no place in the rezoning process. With that said, we feel like we were targeted by this advertisement by a person or persons that wants to see the case fail.  We are pursuing whatever legal options we have to ensure that whomever has done this is exposed.  My clients have been in the hospitality business for 30 years.  Their reputations are impugned by even the suggestion that this ad was placed on their behalf, and they will aggressively bring the wrongdoers to justice. We greatly appreciate any support that the Town can offer in the investigative process, and are happy to support the Town in any way that we can. Please let me know if there is anything we can do.  Like you all, we want to send a message to the community that this type of chicanery will not be tolerated. Best regards, Jason

Thank you for taking the time to speak with me.  As I shared with you, I am yet to find a Town of Cary official that can recall any similar effort to influence the rezoning process, and I certainly haven’t in my 25 years in local government management.

During the course of my conversations on the matter, it was uniformly assumed that Morningstar Law Group was neither involved with nor aware of such an effort.  And while we lack a similar benefit of years of experience with your client, East Coast Hospitality, it was not assumed that they were behind the effort.  Even so, we welcome and appreciate their affirming that they played no role.

The Town is committed to preserving the integrity of all its processes, with rezoning being among the highest of them all.

Without a doubt, the ill-conceived and poorly executed attempt at derailing your client’s development case has been seen for what it is and will not hold weight as the process moves forward.  I am fortunate to work for an experienced and highly-deliberate Town Council that is not overly reliant on any single source of information in their individual and collective deliberations.

That being said, I concur that we want to send a strong message to our citizens, applicants, and other interested parties that the Town of Cary allows for a process that is beyond reproach.  Pursuant to such, we have taken initial steps to identify the source of the ad and have made public comments highlighting the folly of such attempts.  In the days ahead, additional steps will be considered to separate the Town of Cary from such malfeasants, I appreciate your doing the same on behalf of your client.

Later in the evening, and despite a last minute thunderstorm that delayed the NC Symphony concert for about an hour, the July 4th celebration at Booth Amphitheater was festive, fun and capped off with amazing fireworks.

The Town was also honored to host Florida Senator Marco Rubio and his family at the celebration. The Senator’s visit was low-key as he insisted on no fanfare or announcements as he wanted to celebrate our country’s birthday as an ordinary citizen.

Last week Scot Berry talked with representatives from CBL & Associates, the owners of Cary Towne Center. Because of the decision by IKEA, they have paused work on their phase II rezoning application and they are currently rethinking how to redevelop the entire site. We will continue to work with them in their redevelopment efforts.

The Town of Cary has been awarded two new transit grants for FY19. A Transportation Demand Management (TDM) award from Triangle J Council of Governments (TJCOG) provides a 50% match of $59,627 in support of the town’s efforts to reduce single occupancy vehicle trips and vehicle miles traveled by increasing ridership on GoCary services. A NC Department of Transportation (NCDOT) award of $33,748 will support a full-time Transit Intern for one year. The NCDOT intern program offers work experience and learning opportunities to individuals who have the desire to work in the field of public transportation by providing exposure to all aspects of transit system operations.

While Town offices were closed on Wednesday in observance of Independence Day, I’d like to thank the many employees who served Cary citizens and contributed to a safe and celebratory day for our community.

Next week will continue to be slow with just a few activities. These include staff meetings, a business contest, and dinner with the Holly Springs mayor.

Well, that is all for this week. My next post will be on Sunday, July 15th.  Although I have Facebook and Twitter accounts those are not the best means of communications with me. Please send all Town of Cary questions or comments to Harold.Weinbrecht@townofcary.org and email personal comments to augustanat@mindspring.com.