Cary, NC – Up against one of the top teams in the league, North Carolina FC avoided a loss with an exciting goal in the final minutes of this past weekend’s game.

Down to the Wire

North Carolina FC took on the Charleston Battery this past Saturday, July 7, 2018 at Sahlen’s Stadium at WakeMed Soccer Park; the sixth-ranked team in the league taking on the 13th-ranked team. But if the home team could get a draw against FC Cincinnati, then the fans knew these games could be unpredictable.

For the first half of the game, things were at a standstill. NCFC goalkeeper Alex Tambakis stopped a very close shot from Charleston’s Angelo Kelly-Rosales in stoppage time before the close of the first half. Charleston stopped a goal attempt as well, with a 40-yard shot from Austin da Luz in the 12th minute. Da Luz took the shot when Charleston goalkeeper Joe Kuzminsky was out of position but Kuzminsky was able to come back and knock the ball over the net.

It wasn’t until the 63rd minute that the tone of the match shifted as the Battery scored their first goal of the night. Ataulla Guerra, the team’s top scorer, got about 20 yards away from the goal and kicked a low shot that made it in the left corner.

That put the pressure on NCFC, with Daniel Rios in particular taking charges at the Charleston goal. Eventually that energy paid off as Rios got a pass from Nelson Blanco and scored in the 81st minute, tying the game 1-1.

With seven minutes of stoppage time in the game, both teams had an opportunity to come out on top but neither were able to capitalize and the game ended with a draw.

“Right now we have to take it game by game, and I think that’s what we’re doing. Obviously, like I said, it sucks that we didn’t get three points, but a point now is massive – against a team that’s above us in the table, where we want to be,” said NCFC midfielder Kyle Bekker. “We’ll take the positives from it and move on.”

NCFC Head Coach Colin Clarke said the team did a lot of things right on Saturday but fell behind in some other important areas.

“The game, I felt, we had a lot of good possession, and didn’t make their [goal]keeper work enough,” Clarke said. “A bad mistake (Charleston’s goal) let us at the back, and then we came back to get a point out of it – could have been three.”

Tambakis is currently the Eastern Conference leader as a goalkeeper in total numbers of saves this season. Tambakis made four saves against Charleston this past game.

NCFC does not play any home games until Saturday, July 21, 2018 when they take on Toronto FC II at 7 PM. 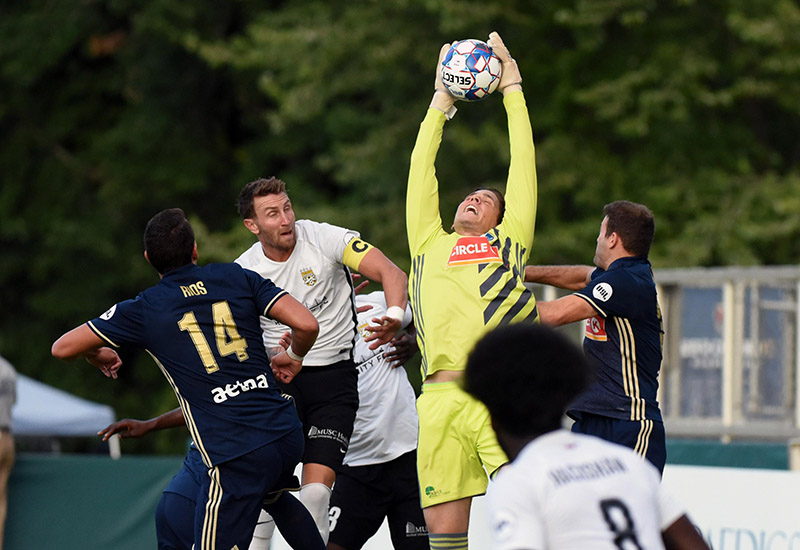