Cary, NC – The North Carolina Courage continue their reign as the most dominant team in the league this season with their thirteenth win of the season and their fourth consecutive win after a shutout victory at home.

A Shutout Win at Home

The North Carolina Courage played against the Washington Spirit Wednesday night, July 11, 2018 at Sahlen’s Stadium at WakeMed Soccer Park and played in heavy, 95 degree Fahrenheit heat. But that didn’t stop the Courage from opening up their scoring early with a goal in the 12th minute.

McCall Zerboni charged toward Washington’s net and saw both Debinha and Lynn Williams in position. Zerboni got the ball to Williams, then Debinha, who kicked the ball in for the team.

It looked like the score would rack up even faster as Williams hit a header into the Spirit’s goal in the 30th minute but referees ruled her offsides. Williams would come close again in the 55th minute as she got the ball in front of what appeared to be an empty net but Washington goalkeeper Aubrey Bledsoe made an incredible leap and blocked the shot.

Not long after, the Courage did finally double their lead as Crystal Dunn got the ball to Jessica McDonald, who then weaved all through Washington’s defenses and scored. With the Courage in control of the ball all night, Washington had few opportunities to respond and the game ended 2-0. This is the Courage’s seventh shutout victory of the season.

Despite the win and the early goal from Debinha, North Carolina Courage Head Coach Paul Riley said the heat hurt the team in the first half.

“It was a good professional performance. I wouldn’t say it was our best performance. It was also 95 out there – it was hot, man. So that obviously hurt us a little bit, especially in the first half,” Riley said. “We settled down a little bit when it got cooler in the second half. Yeah, I’m happy. The result is the result.”

With this win, the Courage have thirteen wins this season and only one loss, cementing their place as league leader.

“We definitely have a target on our back – we are the team to beat. And at the end of the day, it is kind of nice to have that pressure and be able to act on the field in a professional manner the way that we have during this process,” said Jessica McDonald. “It’s pretty amazing to see us improve each game.”

This victory is only weeks away from the Courage’s participation in the first ever International Champions Cup Women’s Tournament, where they will take on three of the world’s best women’s soccer clubs.

The Courage will not play at home until after the tournament is finished. Their next home game is Saturday, August 6, 2018 at 6 PM against their rivals: the Portland Thorns. 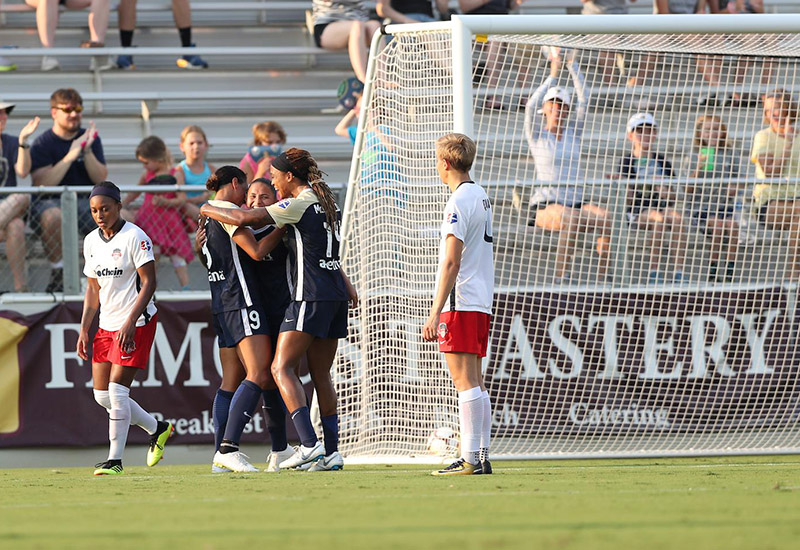