Cary, NC – In a match-up against their Southern rivals and one of the top teams in the USL, North Carolina FC brought the Charleston Battery to a scoreless draw at home.

North Carolina FC took on Charleston on Saturday, August 4, 2018 at Sahlen’s Stadium at WakeMed Soccer Park. Charleston are the third-ranked team in the USL’s Group A, which is the same group NCFC are in.

The team knew they had a tough match-up in front of them because NCFC played Charleston last month at home, which also came to a draw, albeit a 1-1 draw instead of a scoreless game.

Charleston posed a particular challenge because Battery player Ataulla Guerra is one of the league’s top scorers and he came close to putting Charleston in the lead in the 26th minute but the NCFC defense scrambled to stop it. The home team got control of the ball afterwards and Kyle Bekker got in close to the goal but the Battery’s goalkeeper Joe Kuzminsky prevented the goal.

An exciting opportunity in the 52nd minute led to Daniel Rios nearly scoring on Charleston after a pass from Aaron Guillen but this was blocked. The excitement really came in the 55th minute when it looked like NCFC might recapture the ball and score but Steven Miller’s kick hit the crossbar instead, inches away from deciding the game.

In the end, neither team was able to capitalize and the game ended 0-0. 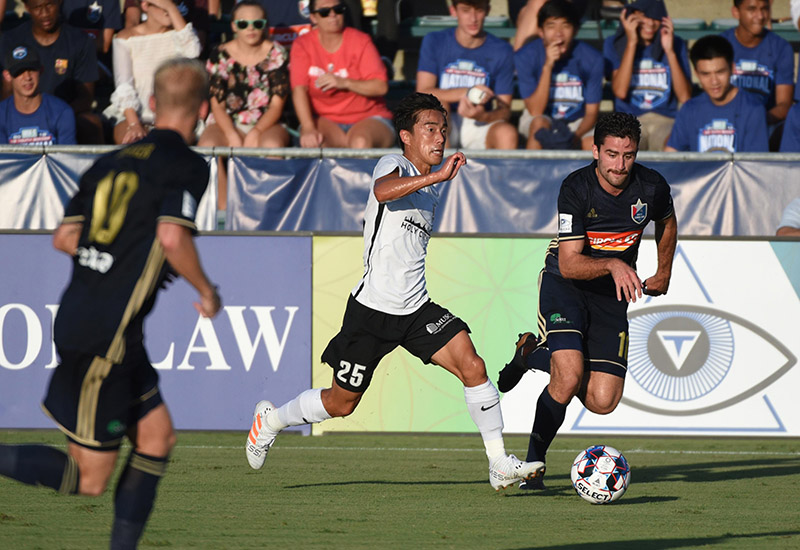 Given that NCFC got a draw against Charleston earlier in the year, Head Coach Colin Clarke said this was a hard-fought game.

“It was two teams that in the past few weeks had been playing pretty well, getting good results. You can see why. There wasn’t a lot created, not a lot of clear-cut (opportunities),” Clarke said. “We probably had the better of the chances, failed to take them – hit crossbar off a deflection, two free headers.”

NCFC has taken on other top teams recently, including a win over the second-ranked Pittsburgh Riverhounds last weekend.

A draw against Charleston also gives the team a point, and they are now ranked 11th in the league group.

“Obviously when you play at home, you want three points and we weren’t able to get it. But we played pretty well at points [of the game]. The first half was good, and at the beginning of the second half, they took over a little bit,” said Steven Miller. “That’s a very good team that we played. We probably had the better of it for the majority of the game and it didn’t go our way. It happens. But it was a fair result. We’d like three points, but we’ll take one.”

The next home game is against fellow North Carolina team the Charlotte Independence on Saturday, August 25, 2018 at 7 PM.