Cary, NC – Anyone paying attention to the North Carolina Courage this season would know they were a lock for the NWSL Shield but it was made official with this weekend’s win at home against rivals the Portland Thorns.

With the Sunday, August 5, 2018 win against the Portland Thorns at Sahlen’s Stadium at WakeMed Soccer Park, the North Carolina Courage have won the NWSL Shield, signifying them as the top team in the league this season. However, there is still the NWSL Championship to go and last year, it was Portland who prevented the Courage from being the first team to win the NWSL Shield and Championship in the same year.

But sticking with the present, the Courage’s match against Portland started fast and the game was mostly decided in the first half. Jessica McDonald charged the net in the 37th minute – likely frustrated after a penalty was not called after a take-down in the 30th minute – and shot the ball over three Thorns defenders. The ball went to Lynn Williams who scored and got things started for the Courage.

Eight minutes later, a wide shot from Merritt Mathias caused a scramble with both Portland and North Carolina players. It ended with Williams once again getting the ball and scoring a goal. In a flash, the Courage were two points ahead.

The Thorns put up a fight throughout the second half and were able to chip away at the Courage’s lead when Lindsey Horan hit a header into the goal. But aggressive offense and fast defense kept the game in their favor and it ended 2-1, making the North Carolina Courage only the second team in history to win the NWSL Shield two years in a row.

“We want to continue out the season and continue building and see how far we can go with this thing. It’s a great feeling,” Williams said. “I think we’ll go back tonight and have a little celebration of just like, ‘We’ve done this,’ but the season’s not over.”

Even with the win over Portland and securing the NWSL Shield, Courage Head Coach Pat Riley still said he was disappointed in the lost point Horan hit in.

“I thought it was a really, really good performance. Disappointed with the free kick; we talked about it the last 48 hours about stopping Horan on the free kicks, but we gave a silly one away. We should have cleared it and paid the price,” Riley said. “But, great performance – I think worthy of winning the shield after that performance.”

As noted, there is still the championship tournament, though with only one loss this season, the Courage seem well positioned to take that as well.

One of the likely championship participants is the Orlando Pride, who play the Courage at home next on August 18 at 7 PM. 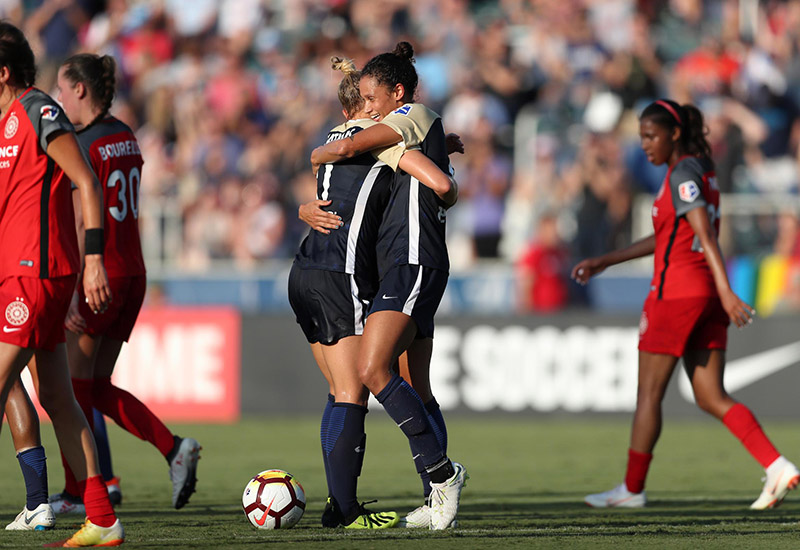 NCFC Draw Against One of League’s Top Teams