Cary, NC – This was a holiday week with Labor Day being celebrated on Monday.

Tuesday I joined Mayor Pro-Tem Bush along with several choreographers in our first group dance lesson for Diwali. Hopefully it won’t take as long to learn those steps as it did to learn steps for my individual dance.

Wednesday I met with the president of the Wake County Homebuilders Association. We talked about several issues and he made several interesting points: 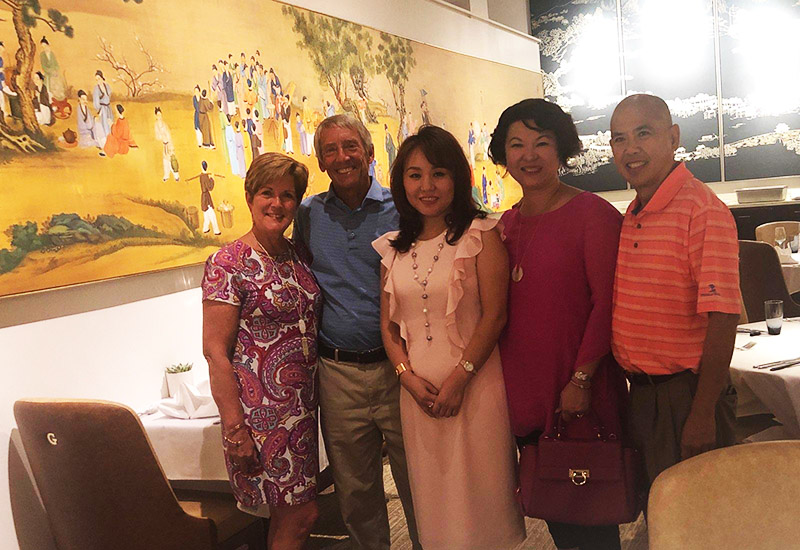 G58 owner with the Chans and my wife and I

Later Wednesday my wife and I had dinner with local two Chinese realtors, Leo and Hannah Chan at an authentic Chinese restaurant, G-58. The restaurants decor was beautiful art created in China including a stick pin art that took four months to create. The Chans are interested in bringing Chinese people and businesses to Cary and have been successful so far. Our discussion included potential jobs in the area and questions about planning for certain areas of town like the mall site. They were very gracious hosts and we enjoyed our time with them. After dinner we toured the restaurant with the owner to look and take pictures of the art. 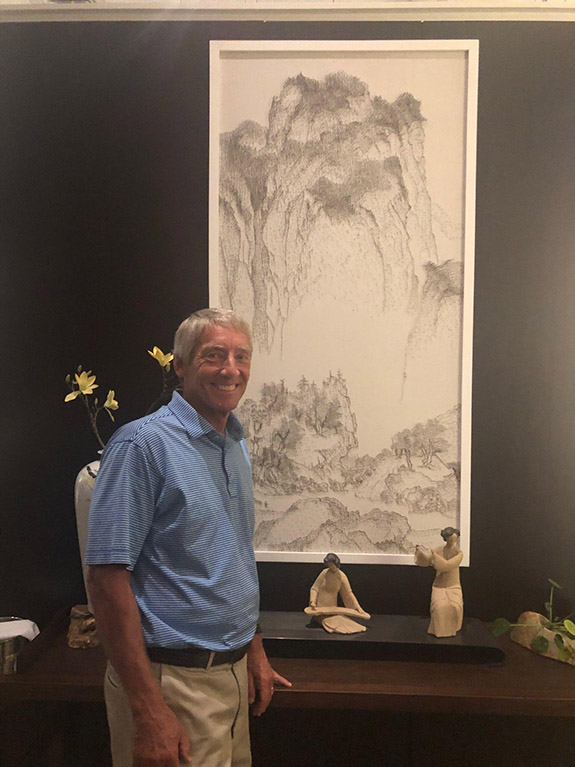 Thursday I had the pleasure of presiding at the Historic Marker Celebration held at the Cary Arts Center. I was joined by council members Yerha and George. Historic markers were added to:

The ceremony had several descendants of the Harrison family who spoke about things they remembered. A lot of the crowd had known each other for decades and it felt a little like a reunion. After a brief ceremony all in attendance enjoyed food and beverage while reminiscing over the past. What a great reception.

Friday I had the honor of formally dedicating the stage at Sertoma Amphitheater as the Bill Leslie stage. Bill Leslie was a long time morning anchor at WRAL and at the same time an acclaimed musician, singer, and composer. Once I dedicated the stage I introduced Bill who played several songs from his upcoming album. During the concert there were several surprise visitors from WRAL. The entire morning crew showed up wearing kilts in honor of Bill’s Celtic music. After Bill played the audience was treated to a performance by the Cary Town band. We are so lucky to have so many great musicians living in Cary.

Sunday I attended a prayer meeting held in the Cary Town Center Parking lot. There were a couple of hundred people in attendance. I, along with Police Chief Godwin, provided remarks about how prayers can be given for Cary leaders and the people of Cary. After my remarks the pastors in attendance gathered around and prayed for me and other leaders.

Dan Ault is representing Cary this week and into the weekend in Qingdao, China at the 5th Annual Global Congress of Knowledge Economy. The conference, dedicated to accelerating economic growth, attracts more than 1,000 world-renowned speakers and participants from about 40 countries. This year’s theme is, “Seeking a Sustainable Future in a Smart World.” Dan is leading a session titled, “Building and Sustaining Smart and Resilient Cities by Using Technology to Promote Citizen Responsibility.” Dan is one of about two dozen researchers, practitioners and educators from around the world who were hand-selected to present and discuss the most recent innovations, trends, and concerns as well as practical challenges encountered and solutions adopted in the fields of Knowledge Economy.

The Capital Area Metropolitan Planning Organization (CAMPO) opened the call for the FFY 2020 LAPP grants last month. Through LAPP, approximately $25 million in Federal aid will be granted to regional transportation projects. When choosing potential LAPP projects, staff evaluates projects based on alignment with the Town’s transportation goals, the project’s readiness, a review of current workload, anticipated availability of matching funds and how well the project ranks against LAPP’s scoring system.

Recently, Cary has been the recipient of a large number of projects through LAPP and the NCDOT Strategic Transportation Investment process. A total of nine federally funded street, greenway, and transit projects are in various phases of project development by the Town. In FFY 20, projects under consideration are primarily in early stages of development, including two design-only projects and one right of way acquisition project. Staff is also considering three construction projects, including two with potential outside partnerships. Although projects in early phases of development are less competitive in the LAPP process, CAMPO is considering additional disbursement of federal funds. Staff is evaluating these projects for submittal during the FFY 20 LAPP process due to this additional funding opportunity and potential other partnerships.

The Town of Cary has officially kicked off the Downtown Multimodal Transit Facility Feasibility Study!  The contract was awarded to WSP for this work, which is expected to wrap up early next summer.  The study examines where the new downtown multimodal transit center should be located and the preferred alignment for Bus Rapid Transit (BRT) service from Raleigh into downtown Cary.  The Town will hold a public meeting on October 30 to get initial feedback on the site selection for the new center.

The Fire Department is monitoring the potential risks, and impacts with Hurricane Florence.  While there is still a great deal of uncertainty regarding Florence’s track and potential impacts to central North Carolina, we are monitoring and preparing as needed.

On Thursday evening, a small reception was held to celebrate the installation of four historic markers. The markers were Sams-Jones House, White Plains Cemetery, Cary Arts Center, and Mayor Harrison. Along with celebrating the markers, many people shared stories about these historic places and people.

The Environmentally Speaking Film Series will be held Thursday at 7p.m. The film, Wasted!, highlights the issue of food waste in our society and features prominent chefs discussing delicious and innovative ways to prevent food waste. After the film there will be small facilitated conversations in downtown Cary businesses.

Congrats to Brandon Pasinski and his fleet team for receiving two awards at the NC Mobile Care Awards Ceremony. The first was the 2018 Mobile Care Award for Cary’s work in advancing clean transportation. The second was the 2018 Smart Fleet Champion Award for demonstrating excellence in fleet efficiency, fuel diversity, and conservation by reducing petroleum fuel use. Pictured is Fleet Manager Brandon Pasinski and Christopher Werner, Director of Technical Services, NC Department of Transportation.

This week I received an email from Wake County School board member Bill Fletcher. In the email he discussed the Student Assignment Plan. He said:

“As the balance of 162,000 students began classes, district staff released the draft plan to open four new schools in 2019 and assign students to schools with available seats…all in an effort to reduce overcrowding, comply with the state-mandated class size reduction, align k-8 calendars and possibly remove enrollment caps from some schools.  Public information sessions are being held now.  Draft 2 of the plan will be released September 18.  Public comment is welcomed at the district website.”

This plan impacts a lot of Cary residents who have been upset and vocal. Cary Council members have also weighed in to various school board members. Hopefully the school board’s final plan can meet their objectives without the serious impacts on Cary.

Well, that is all for this week. My next post will be on Sunday, September 16th.  Although I have Facebook and Twitter accounts those are not the best means of communications with me. Please send all Town of Cary questions or comments to Harold.Weinbrecht@townofcary.org and email personal comments to augustanat@mindspring.com.