Cary, NC – Predating Cary’s incorporation, the Page-Walker Hotel (now the Page-Walker Arts & History Center) was a crucial part of the town’s origins. Cary is commemorating the building’s 150 years with Bygone Daze, including new displays in the center and celebrations from now to the end of 2018.

The Page-Walker Hotel, known as the Page Hotel and the Cary Hotel at various times, opened in 1868 as a hotel and restaurant for railroad customers, opened by Cary’s founder Frank Page who also used the railroads to ship lumber as the backbone of his business enterprise.

While the official Bygone Daze celebrations were originally planned for Saturday, September 15, 2018, Hurricane Florence caused that to be cancelled, but the building’s history will continue to be commemorated.

“The celebration will happen one way or another,” said Kris Carmichael, director of the Page-Walker Arts & History Center. “But we will be celebrating the 150 years throughout 2018.”

Those other celebrations include the Saturday, October 27, 2018 Ghost Walk, which Carmichael said will focus on the Page-Walker with new information this year, as well as the return of the downtown Trolley Tour in November and the December open house.

But currently, the Page-Walker Center has new displays up to show people the history of the building, from the Page family to later owners and then the efforts to renovate it and turn it into the Arts & History Center. Other displays include a history of the  railroad and a recreation of what a hotel room would have looked like back in the mid to late 19th Century.

“We used photographs from a hotel in Western North Carolina from the same era as a guide. There was no plumbing so we have a pitcher and basin, as well as a chamberpot. There’s also a bed, a table and a chest of drawers,” Carmichael said. “It answers a question people have had over the years.”

Other displays include quotes from people who stayed at the Page-Walker Hotel in the past and their recollections and writings on what life was like at the time. 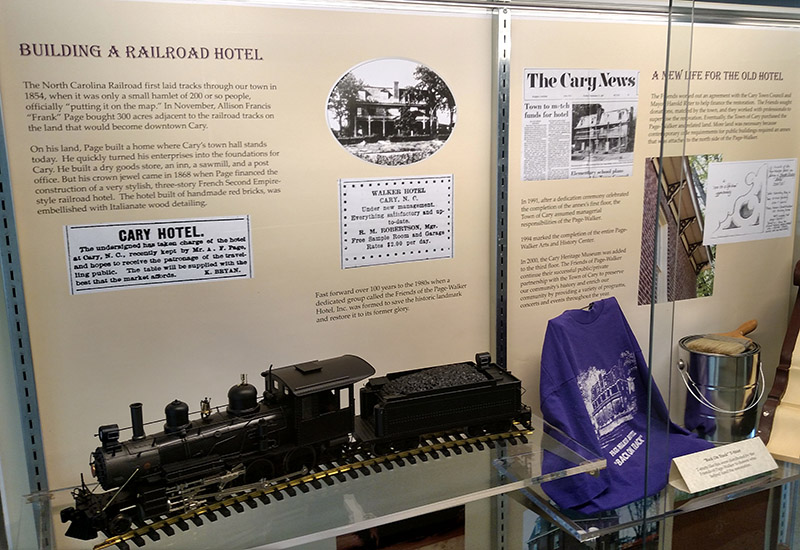 The Page-Walker Hotel goes back even further than Cary’s incorporation in 1871. Frank Page opened the hotel for business in 1868, next to his home which is where Cary Town Hall currently stands.

“It contributed to Cary’s development because when the train stopped, local people were shipping things on the train and lots of passengers were traveling salesmen,” said Peggy Van Scoyoc with the Friends of the Page-Walker and author of the Cary history book Just a Horse-Stopping Place. “Trains were the life-blood of the community and having a place for passengers to stay and eat helped.”

While Bygone Daze will focus primarily on the Page-Walker’s first 32 years according to Van Scoyoc, the history continued with interesting details and notes. After Frank Page sold ownership of the hotel, it was a boarding house and would often be used for overflow for the Cary Academy (now Cary High School) dormitories.

“The students had to fend for themselves and do the chores to pay for their housing,” Van Scoyoc said. “There was only a well for water since there was no indoor plumbing.”

The property passed between multiple owners until 1941 when Cary resident John Williams bought the house and owned it until 1971. Williams had a hobby for restoring circus wagons and would sell them to traveling circuses when they would perform at Dorton Arena in Raleigh.

“He ran a literal dog-and-pony show in a park in Durham,” Van Scoyoc said. The Page-Walker Center also has photos of Williams with various circus animals including a bear.

After 1971, Cary florist Robert Strother owned the property but later vacated it in 1980, after which time the Cary Historical Society focused on restoring the building.

“It was in a condemnable state,” Van Scoyoc said. “The upstairs bathtub had fell through the floor.”

Now that the Page-Walker is a Town of Cary building and a place to reflect on the town’s history, Carmichael said what is being done with the center now is part of its history when people look back in the 200th year.

“Attendance numbers grow year by year, the camps we hold here continue to grow and we’re always looking for ways we can contribute to the community and culture,” Carmichael said. “Its story is it continuing to be an active and vital part of Cary.”

The Page-Walker Center is located at 119 Ambassador Loop in Downtown Cary. 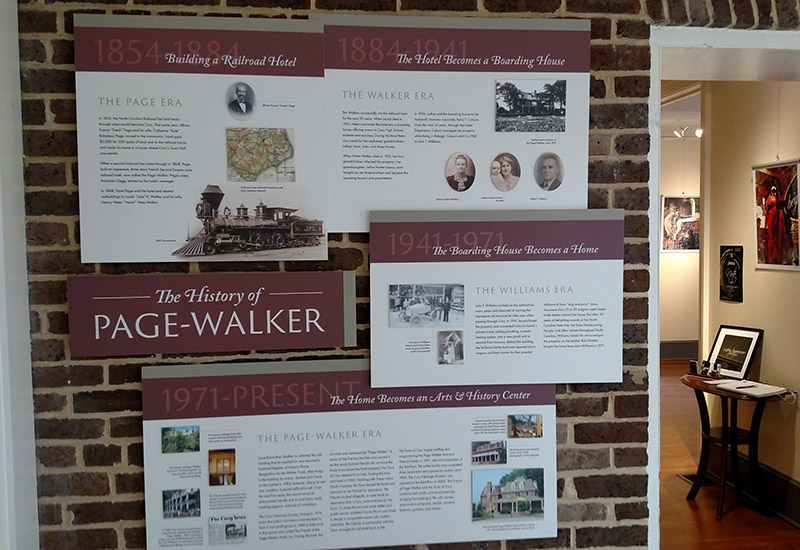