Cary, NC – With early voting starting in less than a week, candidates for the Wake County Board of Education met at a forum to discuss top questions about local public schools, particularly managing growth and ensuring student safety.

Wake County has nine Board of Education members and unlike the Board of Commissioners, county residents can only vote for the board representative in their district. In Cary, that is primarily District 9, as well as some parts of District 5 and District 8, with Morrisville in part of District 7. You can also find which schools are in which district online.

The candidates who attended were:

The first question in the candidate forum at the Cary Chamber of Commerce on Wednesday, October 10, 2018 asked the candidates about how to handle and manage the county’s growth. Mahaffey said better communication between the school system and parents is important and pointed to Wake County’s school assignment as an example.

“All of the sudden you get an email saying you’re moving schools and it changes a lot of things in your life,” Mahaffey said. “We need better communication.”

Malone said there is a problem trying to manage growth on the local level while school boards are being put under more pressure to keep building schools while also reducing the number of trailer schools.

Fletcher said while the relationship between the Wake Board of Commissioners and the Board of Education is positive, there in a tension in finding funding and there is currently a shortage of elementary schools.

“We tell the commission we need funds for new schools and they say we then need to do less renovations,” Fletcher said.

Speaking of renovations, Martin talked about the funding and resources needed for schools, as they need to be renovated once every 40 years. But one way to relieve the pressures of growth, he said, are to ensure that schools are top quality all over the county.

“Quality schools will attract people and if we have growth in the East, it relieves pressure in the West,” Martin said.

Cash and Pollenz both said year-round schools could help manage growth while Scott and Sutton said the county needs to be strategic with how and where it funds schools. Mial said there are a number of proposals on the table, such as giving the school board its own taxing authority, but specifically said splitting up the school system would not be a good idea. 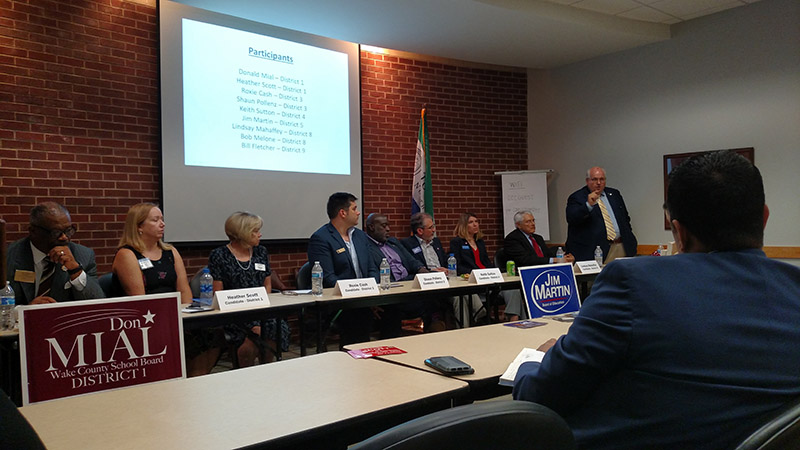 The second and final question of the candidate forum focused on school safety and what can be done to protect students in schools. Fletcher said, in addition to pushing back against proposal to equip teachers with guns, is to hire more social service employees such as nurses and counselors.

“We need more people trained to ferret out the anxieties and fears of students so children feel safe to share what’s going on in their lives,” Fletcher said.

Martin said having safe schools starts with having safe communities but he also pushed for more resources by laying out the costs of bringing in more social services.

“To put one nurse or counselor in every school in Wake County, it would cost $10 million,” Martin said. “That’s the scale.”

Mahaffey started by saying she was in high school when the Columbine school shooting happened and said there have been safety improvements in Wake schools including buzzers and better building designs as well as safety audits.

“When kids are safe, they thrive,” Mahaffey said, but said that safety needs to extend to students feeling safe to talk with teachers or counselors.

Malone said increasing the number of resource officers in schools can exacerbate problems and punishments. He also talked about caring for students’ mental health is important and it should be addressed early in development.

“Early signs start to show in elementary school and it’s not something we are acting on,” Malone said.

Mial and Sutton both talked about a task force convened years ago to look at school safety with several proposals and plans included in that, while Sutton also said the board’s task is education and not law enforcement. Scott, Pollenz and Cash also talked about the importance of support staff, while Cash said the board has been focused on bringing more of these employees into the school system.

Story and photos by Michael Papich. Community content sponsored in part by Morrisville Chamber of Commerce

Guide to Beer In and Around Cary