Cary, NC – The Carolina Hurricanes suffered their first loss at the PNC Arena in regulation to ht Colorado Avalanche 3-1 on Saturday, October 20, 2018. Special teams were a main factor in the outcome with the power play going 0-for-5 and the penalty kill going 3-for-4.

Goalie Curtis McElhinney was between the pipes and took his first loss of the season. With Scott Darling expected to be back shortly, McElhinney may be put on waivers and info that happens, good chance the Maple Leafs will pick him up, returning to the team that put him on waivers two weeks ago.

Many folks got to the arena early for the 1 PM game as it was the last day of the fair but give kudos to the parking arrangements as there wasn’t a problem getting to the game. While the Canes are a young and fast team, the Avs can match the Canes with speed on all four lines. The Canes’ second line of Sebastian Aho, Teuvo (Turbo) Teravainen and Michael Ferland had a great first shift on the ice, attacking the goal and crisp passes. Rookie Warren Foegele took the games first penalty with a high stick but the Canes penalty kill played very well.

Brett Pesce, rock solid all game, deflected what looked like a sure goal when he extended his stick off a Nathan MacKinnon shot. McElhinney was also solid on the powerplay stopping the two shots the Avs were able to get off. The Canes best chance in the period was when Andrei Svechnikov had the puck, skated hard between three opposing players taking a nice shot but Philipp Grubauer made a very nice save. Less than a minute later, Jaccob Slavin jumped in on the rush, carrying the puck along the near boards dropping a pass to Turbo whose shot fanged off the left post. The Avs’ MacKinnon got the rebound, used his speed to go down the far board, passing off to Gabriel Landeskog, who had a hat trick two days earlier, squeaking the puck short side past McElhinney for the 1-0 lead.

Early in the second, right after a barrage of shots by the Avs, Turbo had the puck in the middle of the Canes defensive end. He looked up and saw Ferland on the neutral side of the Avs’ blue line. Turbo made a perfect headman pass that Ferland got by out muscling his defender then going right to the goal. Ferland faked forehand, dragged the puck to his back hand for the shot but Grubauer anticipated the move making a great save. It’s early in the season and it’s common for refs to call games fairly tight.

Svechnikov got called for a slashing penalty that would have barely shooed a fly away from the picnic table. Landeskog got his fifth goal in two games, second of its game on the powerplay. Landeskog had the puck in the near faceoff circle and was making a pass cross ice. Pesce’s stopped the puck with his skate but McElhinney committed to move into position on the attempted pass allowing Landeskog an open net for the easy score. 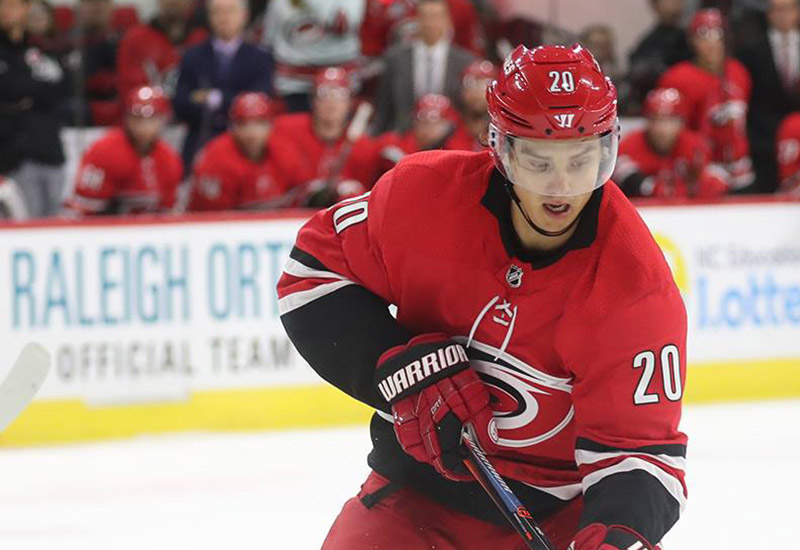 Ferland Gets Canes on Scoreboard

The Canes kept the pressure up in the third, with the second line still playing aggressive. Ferland was a beast on skates, following through on every check, always with his head on a swivel. After a few hard checks in the Avs’ end, words started being exchanged. As play started towards the Canes end, Ferland missed intercepting a pass but followed up with a hard, legal check. Erik Johnson, who was jawing with Ferland a few moments earlier skated over to Ferland and immediately dropped the gloves. Both got five minute majors and I still don’t understand how.

Johnson did not get an instigator minor as it appeared to be textbook for that type of penalty. The remainder of the period was chippy with much of the action going up and down with rarely more than two shots at either end during their respective attacks. Late in the period, just under the 17 minute mark, MacKinnon came streaking down the near boards with speed going into the Canes end sending a wicked shot high glove side for the 3-0 lead.

The second line was on the ice after the goal and kept the pressure on in the Avs end. Sea bass had the puck behind the goal with a defenseman all over him but somehow was able to send the puck to the dirty area where Ferland was camped out for a nice tip in to get the Canes on the board. After the ensuing faceoff, Captain Justin Williams and Ian Cole starred tussling with both going off for roughing.

More than likely, Willie was just trying to send a message to his teammates the game isn’t over until the final buzzer. The Canes never gave up and played hard to the end even with the game’s outcome predictable. Disappointing loss for the Canes and now they have to regroup and work on special teams.