Canes Bite Back, Beat Sharks 4-3 in SO

The Carolina Hurricanes had what could be viewed as a coach’s win and twice they fought back from two goal deficits by grinding and hard work, just like ahead coach Rod Brind’Amour did throughout his career, to beat a very strong and stacked San Jose Shark squad, 4-3 in a shootout. After their slowest start of the year, the Canes scored 3 goals in the second period to knot the game.

It’s debatable who has the best offense, the best defense or the best goalie in the NHL but both the Canes and Sharks have powerful defensive corps. With the acquisition of Erik Karlsson, the Sharks have Norris Trophy winners for three of the past four years. As Canes TV me. announcer John Forslund says, the Canes have one of the NHL best kept secrets in Jaccob Slavin. Add to that Brett Pesce, Justin Faulk, Calvin de Haan, Trevor van Riemsdyk, Dougie Hamilton and Haydn Fleury, the Canes take a second seat to no other team. 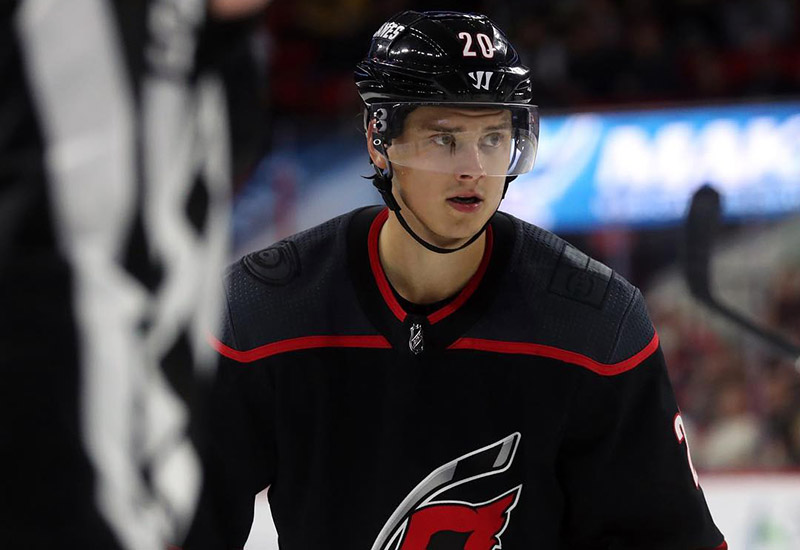 The Canes last game was a 3-1 win in Detroit this past Monday and maybe that was too much time off as the Canes played their slowest period of the young season. Anytime the Canes tried to get into their rhythm the Sharks did a good job of slowing the tempo.

Brent Burns, another premier defenseman in the league, made a pretty centering pass from the near boards early in the contest after seeing two forwards and three defenseman crowding the crease. Petr Mrazek made a fine pad save with Slavin clearing the puck to the corner boards. After the Canes had three solid scoring chances in the dirty area, Burns got control of the puck sending owner to Evander Kane.

Kane sent a crisp pass to Antti Suomela who used his speed and body to protect the puck going in almost unchallenged on Mrazek who put his skate out only to trip Suomela but stills was able to put the puck in the black door for the 1-0 lead. Less than two minutes later, the Canes’ Teuvo Teravainen got called for hooking. The Sharks’ Timo Meier split the defense and put it past Mrazek for a 2-0 lead.

Count on Coach Rod Brind’Amour making comments during the first intermission about getting back to “their game” and as soon as the puck dropped, it was evident the Canes had their legs back. It was evident from the drop of the puck to open the period, the Canes got back their jump and speed. The Canes had the puck in the Sharks’ zone and just completed a flawless line change sending out the top line.

Michael Ferland had the puck in the near faceoff circle, keeping possession going through the mid slot area then passed off to Dougie Hamilton on the left point. Ferland sent a perfect soft saucer pass that Hamilton skated into with a hard slap shot destined for the lower corner stick side but Burns tried to stop the puck, instead deflected it into the upper corner to cut the lead in half. Lucas Wallmark got called for a slashing penalty behind the play putting the lethal Sharks’ powerplay unit on the ice. The Canes PK looked good and one small error proved fatal.

With time and space, a Cane defender had the puck down low to the left of Mrazek and rather than do the simple thing of clearing the puck deep, he passed off for a teammate to carry the puck and waste more time. The puck was easily intercepted by Logan Couture who passed to a wide open Tomas Herti who buried it for the. Sharks second two goal lead. Maybe in past years that goal would have had an effect on the Canes bench but this is a new year with more of a new attitude than I’ve seen with a team in years.

Just over midway in the period, the Canes dumped the puck deep right at Shark goalie Aaron Dell. Wallmark attacked the goal and was tackled in the crease with Dell also getting bumped. The puck squirted loose and Brock McGinn pounced on e puck sending a wicked wrister behind Dell to cut the lead to one and really got the Caniacs into the game.The goal is officially unassisted but without Wallmark hustling to the net, the goal doesn’t happen. The Canes kept the pressure on and just over five minutes later, Sebastian Aho got a rebound in the offensive zone. Seabass skated wide seeing fellow Finn Teuvo Teravainen in the high slot and making a smooth pass. Turbo was left alone and skated to an open area virtually picking out where he wanted to put then shit to tie the game at three apiece. 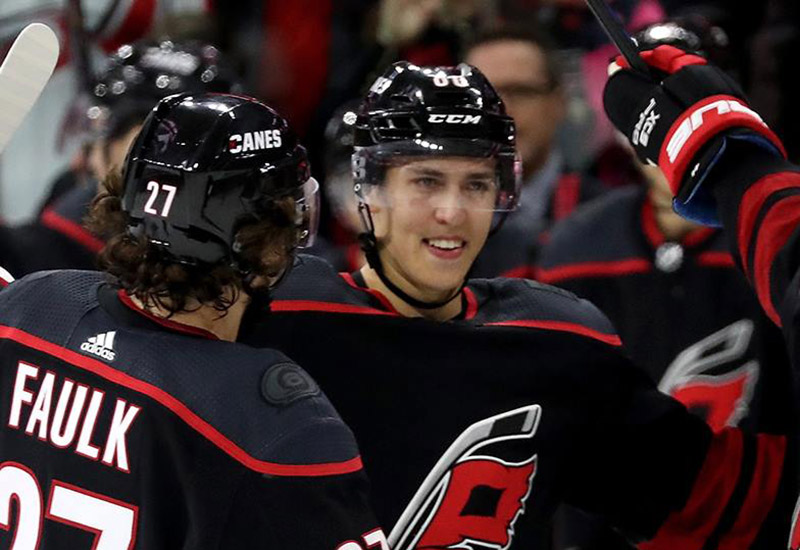 The third period did not have any scoring but was as exciting as the second. The Canes again dominated the Sharks on both ends of thee limiting the Sharks to just five shots on goal, the same number the Sharks had in the second. Erik Karlsson is a phenomenal player and is one of the best players to watch during a game and to think he did not have one shot against the Canes is credit to the Canes’ defense and excellent forechecking by the offense.

Brett Burns did get three shots on goal which challenged Mrazek on all three but Mrazek was solid on all three. The Canes did muster 11 shots on goal, some were excellent scoring chances but none were able to get by Dell. The overtime period did not have any scoring but was one of the most entertaining I’ve seen. The Canes got six shots off while the Sharks got two which was about the same ratio of possession for each team.

Brock McGinn had the lone goal in the shootout giving the Canes a rare shootout win. The after game team celebration was again a special with very few of the crowd leaving right after the shootout. When the three stars of the game were introduced, third star Dougie Hamilton came out and did a floss dance to add to the new Canes image.

For the second time this season, the Carolina Hurricanes lost to to NY Islanders, both times 2-1 at the PNC Arena. The Islanders beat the Canes in OT on opening night then getting this win in regulation.

Thomas Greiss was in net again and got just his second win for the season, obviously both against the Canes. If he plays this well at the PNC Arena every game, if the Canes goalie situation can’t get resolved, maybe GM Don Waddell may want to have discussions with the Islanders.

Funny how pro sports goes: on paper the Canes are a better team but just couldn’t penetrate deep enough to score. The Canes had nearly double the shots, 39 to 20, but few were serious scoring chances. And when there was, Greiss was outstanding. 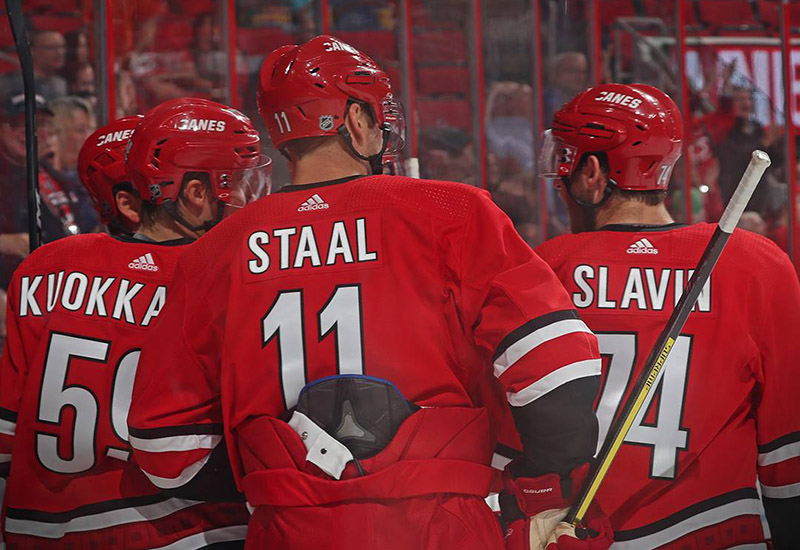 The Canes started game with the intent of righting the wrong they felt they got on opening night as they completely dominated that game. Coming away with an OT loss, many Caniacs had déjà vu as that was so typical of games over the past few years. After that opening night loss, the Canes kept the same upbeat, fast, in-your-face style of hockey and started their climb to the top echelon of teams in the season so far.

Early in the first, Jordan Staal got called for a hooking penalty that quite possibly doesn’t get called late in the season and certainly not in the playoffs. The Islanders wasted no time converting on the powerplay to go up 1-0. Special teams, the penalty kill unit (currently dead last in the NHL) and the power play units need to have some puck luck going their way and it’s all going against them now. The talent is there, but possibly some sandpaper is missing on the PK.

The Canes’ first powerplay was the weakest looking one they’ve had all season. Fortunately they had a second chance later in the period and while they didn’t score, the improvement was quite noticeable with two solid shots on net. Former Islander Calvin de Haan, who does play with an edge, made an old time hip check on Matt Martin against the near boards. Martin took exception and tackled de Haan to the ice that gave the Canes that second powerplay. Rookie Andrei Svechnikov took his sixth penalty of the season on a slight hook but still all those penalties will most likely be addressed by Rod Brind’Amour.

Like the last game after a slow first period, the Canes came out with the added jump in the second. After the Staal line won the faceoff and brought the puck in the Isles’ zone keeping nice control, the Canes made a good line change with the second line of Sebastian Aho, Teuvo Teravainen and Michael Ferland. Aho got the puck from Trevor van Riemsdyk then circled the wagon starting along the far boards up high, inside the blue line down to the near face off circle then sending a back handed shot/pass which was kicked out to the slot that Turbo banged in to tie the game.

No credit on the score sheet but Ferland’s presence in front of the net meant everything to allow the rebound. Late in the period after a quasi rush by Warren Foegele that was thwarted by a good defensive play, the Isles roared back up the ice. The Canes were a little slow getting back both on defense and position allowing a pass to Ryan Pulock in the high slot. Pulock got the puck with his back to the goal and in one motion twirled around sending a hard shot along the ice glove side to put the Islanders back up by one. 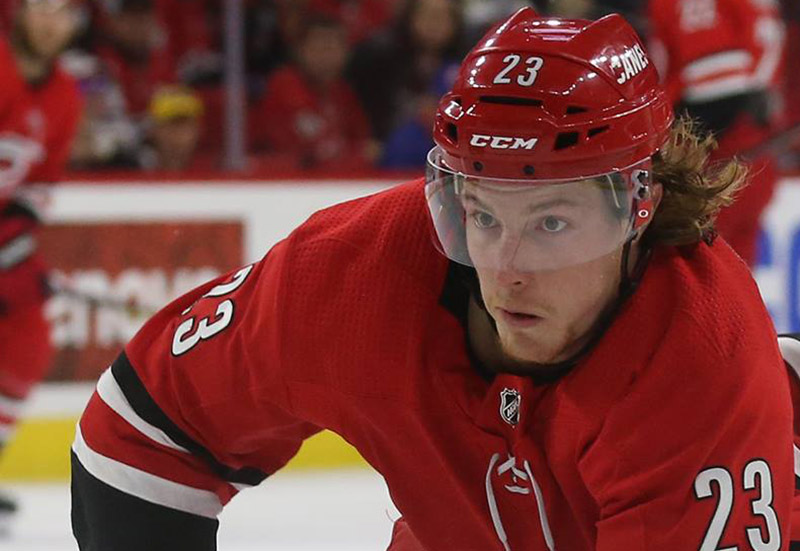 The Canes threw everything they could at Greiss in the third but Greiss was solid making some very impressive quick saves. The Canes’ defense did play a good overall game but the forechecking by the forwards appeared spotty at times. For the second game in a row, the puck was jumping a lot which has to be a factor of the ice quality.

Years ago, the Canes were known to have one of the better sheets of ice in the NHL but not sue that’s the case any longer. It affects both teams so it’s not an excuse, just something that should be addressed if it is in fact a poor ice surface.

The Canes were putting good pressure on the Islanders and the Caniacs had their hopes up but with five minutes to go, Justin Faulk got called for a penalty. They did kill off the Islanders’ powerplay but that took two minutes away from the offensive zone. After the new st to the home celebrations, the Caniacs were anxious for what was in store but they’ll have to wait for the next game as the final was Islanders 2, Canes 1.

Next home game is Tuesday, October 30 (happy birthday Jeff) against Boston. Be there! For those interested, there’s another group deal 2-for-1 special for the November 11 and December 12 games. If interested in tickets, please contact me, bfennel11@yahoo.com.