Cary, NC – Ouch! This one hurt. Hurt real bad. After what seemed like a solid two-goal lead going into the third, the Canes allowed two goals, both by Anthony Mantha, to send the game into overtime and then the shootout. The Detroit Red Wings came out on top by a 4-3 score silencing the Caniacs that were anxiously awaiting the newest celebration.

Both teams play a fast game as both are young and, according to some NHL experts are supposed to be dusting off their golf clubs come April. The start of the game was fast with the Canes forcing the Wings to ice the puck six times before the first TV timeout. The Wings scored first when Andreas Athanasiou scored on a shot that goalie Scott Darling has to make a save on.

On a set play, the Wings won a face off to Darling’s right, Athanasiou, positioned on the far side of the circle, after the puck was dropped, immediately went cross ice, got the pass and sent one short side as Darling was slow to cover the near post. Late in the period, after a face-off deep in the Red Wings’ end, rookie Clark Bishop won the puck with Phil DiGiuseppe sending it up to Hadyn Fleury on the left point. Fleury took a look, took a stride then sent a slap shot to the net. Brock McGinn standing in front got his stick on the rebound sending it in to tie the game.

The second period was all Canes, dominating in every aspect of the game: speed, passing, forechecking, defense, possession, shots and attitude. With the Canes on a man advantage, Teuvo Teravainen had the puck on the far boards, passing up to Sebastian Aho. Seabass carried the puck along the inside of the blue line down to the near faceoff circle.

Michael Ferland was muscling for position in the mid slot area when Seabass made a crisp pass that Ferland nicely redirected into the net for his team leading eighth goal. Late in the period, the Canes were pressing hard again. Teravainen had the puck along the far boards seeing Seabass all alone in front of Jonathan Bernier the Red Wing goalie.

Seabass got the pass went forehand then backhand but Bernier wasn’t fooled making a save off his chest. Dougie Hamilton used in long stride to charge the net slapping in the rebound to put the Canes up by two.

The third period was one to forget as the Canes squandered the two-goal lead, which is usually a very good chance for a win under normal circumstances. The Canes have to learn to play to win with a lead. That’s not to say to embrace the turtle effect but they have to play tight and not drop their game which centers around speed and forechecking.

After having the puck deep behind the Wings’ goal, the Wings started the clear with a simple tip pass in their defensive end, skating unchecked through the neutral zone entering the Canes’ end with both time and space, Mantha sent a wrister past Darling from the top of the circle.

Mantha scored less than two minutes later on a similar play. The Canes had the puck deep, the Wings had an easy, textbook-clear sending the puck up to Mantha. Brett Pesce was in position in front of Mantha and blocked his shot, Mantha was quick pouncing on the rebound off Pesce’s shin, sending it far side past Darling to tie the game.

This Wings are a no-quit team as this was their third consecutive game in which they scored two third period goals to tie or win the game. Darling saved his best saves for the overtime as the Wings had four solid shots while the Canes, even with a 15 second man advantage were not able to muster even one shot. The Canes went 0-fer in the shootout with the Wings’ Frans Nielsen scoring the lone goal. Terrible ending for what could have been a good start to a nice, long, six-game home stand.

Next game is Monday, November 12, 2018 against Chicago with a very good chance Cam Ward starting in goal for the Blackhawks. Be there! 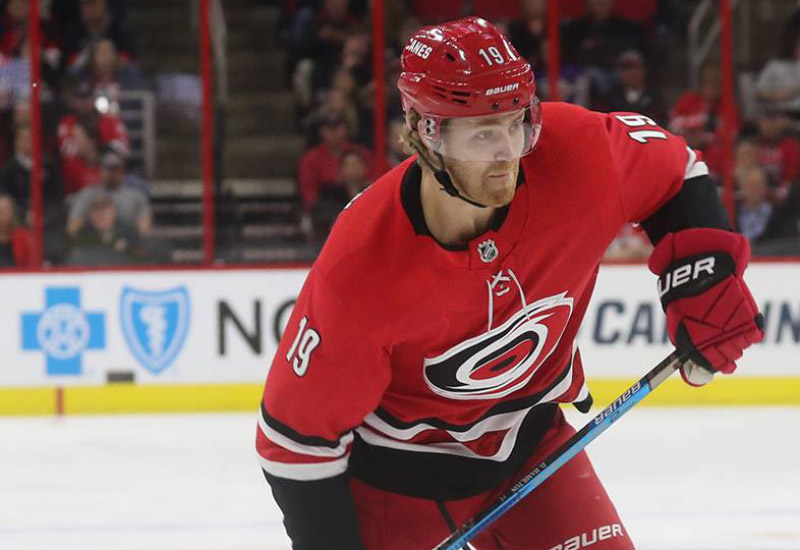 Both games next weekend are having great specials that will also help needy Triangle families have a better Thanksgiving. Help support local families in need this Thanksgiving with the Hurricanes Tickets for Turkeys program!

For every (4) tickets purchased through this personal link, the Canes will be donating a turkey to a family in need this Thanksgiving. Not to mention, huge ticket discounts to you and your family through this special offer: http://www.turkeycanes.com/2018 PROMO CODE: SLAIS.

Just to clarify, you can buy any amount of tickets: one, four or even 100 if you like. The promotion is for every four tickets with this promotion will have a turkey donated.