Cary, NC – A strange form of vandalism resulted more than a thousand gallons of wastewater pouring into a Cary creek this week as dozens of large stones were dropped into a manhole, blocking the pipe.

On Wednesday, December 5, 2018, the Town of Cary was alerted about a wastewater overflow. 1,350 gallons poured into a tributary of Panther Creek before Cary crews stopped the blockage less than an hour after they were notified.

“Normally, we dechlorinate the potable water and rake out any debris. We also vacuum up any water and waste,” Smith said. “If it washes into any streams or creek, we go through the same process. We set up a dam to contain the wastewater and pump it out.”

The blockage was created by 30 to 40 football-sized stones dropped into a manhole cover that was two to three feet off of the ground near the 500 block of Fumagalli Drive. Among the stones were also logs, sticks and pebbles. Smith said all of this debris, which was enough to block the eight inch diameter pipe, could not have gotten in there by accident.

“Someone pried off the manhole, both the ring and the cover, and stuffed debris down there. It stopped up the flow of wastewater,” Smith said.

Smith said this kind of incident is rare and he does not know of something similar happening within the past year and said he does not understand why someone would do this.

“It’s not as easy to take the manhole cover off as lifting it and tossing it to the side. In this case, it took not only prying it up but prying up both the ring and cover,” he said. “It’s not impossible but it takes a lot of effort.”

As for where the large rocks came from, Smith said there is a nearby stormwater retention pond lined with similar rocks used to reduce erosion.

Town staff were alerted about the overflow around 10:30 AM on Wednesday and had the pipe unblocked by 11:15 AM. Smith said it is fortunate they were told when they were or the overflow could have been going on for days.

“Citizens can help us by being observant,” he said. “Whether it’s seeing something strange happening with utilities or picking up a smell.”

There is no word yet on who caused the blockage. 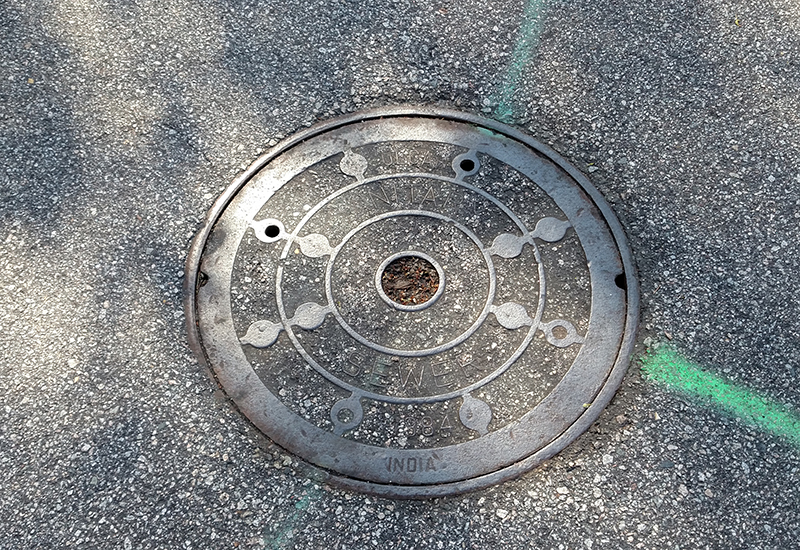 An example of a Town of Cary manhole cover. The one in this case was several feet above ground.