Since this was a holiday week there isn’t a lot to post.

Thursday morning I attended the Economic Forecast breakfast held by the Cary Chamber. At the beginning of the event, I had the honor and privilege of administering the Oath of Office for my friend Gale Adcock’s third term in the North Carolina House of Representatives. Mayor Pro-Tem Bush held Gale’s Bible (her grandmother’s). I have had the pleasure to know Gale since 2007 and served with her on the Cary council for years. I couldn’t possibly think of a better person to represent Cary. I am sure she will continue to do a great job on our behalf. 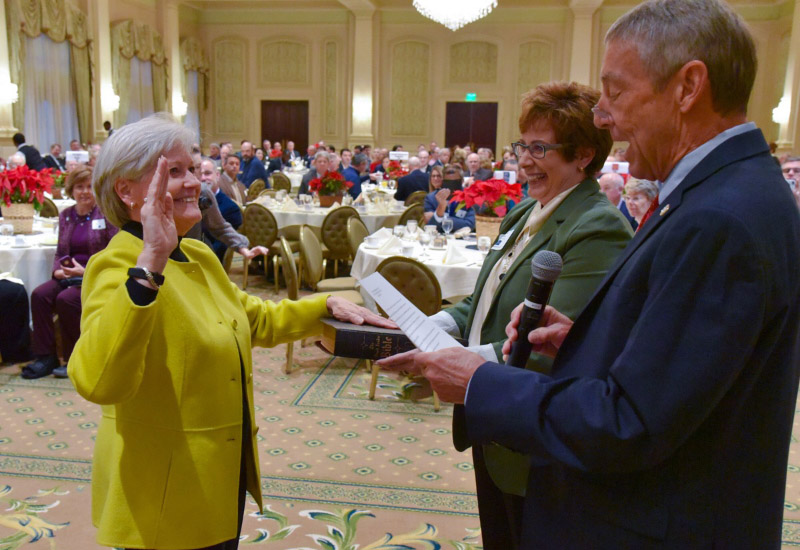 Gale Adcock being sworn in, with Lori Bush and Harold Weinbrecht

The featured speaker at the Economic Forecast breakfast was Dr. Michael Walden of N.C. State. Some of the interesting points I took away from his talk included:

The information was very helpful to the business leaders and elected officials in attendance. His talk concluded after about 45 minutes.

The Greenway Committee and Teen Council helped residents kick off 2019 on the right foot with the annual First Walk. The White Oak Greenway provided a perfect setting for over 150 participants to begin the new year by exploring the greenway system, enjoying the mild temperatures and getting a start on healthy habits for 2019. First Day Hikes began over 40 years ago in North Carolina to promote healthy lifestyles and recreational opportunities.

Over 400 people enjoyed the colorful sights and sounds of the 24th Annual Cary Kwanzaa Celebration at the Cary Arts Center on Friday, December 28th. The annual event is a communal, cultural celebration that honors our African-American heritage and is a celebration for all people, focusing on family, friends and the fruits of the earth. Kwanzaa is co-sponsored by the Ujima Group, Inc.

The theme for this year’s celebration was “Working to Build A Kind and Just World” and featured a wide array of performances including percussionist Bradley Simmons (pictured above), jazz ensemble The Mac McLaughin Group and Collage Dance Company. Vocalist Shannon and piano and flute duo of Elmer Gibson and Lori Barmer closed out the show. A highlight of the day was the traditional Kwanzaa ceremony with libation, candle lighting and Harambee Circle.

2018 was the Town’s first year with a formal asset management program, a collaborative initiative built with the support of stakeholders from across departments. As part of this program, the first annual asset management report was issued, providing a ‘dashboard view’ of the current state of Town assets. This report helps verify that program implementation is producing the expected results and that level-of-service standards are being met. Initial activities were focused on buried infrastructure such as water, wastewater, reclaimed water and stormwater. In the future, other linear assets and vertical infrastructure will be included.

The next Rezoning Neighborhood Meeting will occur at Town Hall on Wednesday, January 9 at 6:30 p.m. Neighborhood meetings provide an opportunity for applicants to present information on new rezoning requests and receive feedback from nearby property owners prior to the formal public hearing. Staff will provide general information regarding Cary’s rezoning process.

There are three rezoning cases for Wednesday’s meeting:

In FY18, the County collected $99 million for public transit in according to the Wake County Transit Plan Annual Report. This funding has facilitated progress on:

The FY20 Wake Transit Work Plan is currently being developed. A draft will be available for review and public comment in the spring.

In November, Triangle J Council of Governments requested utility operator assistance on behalf of the Town of Robbins. Cary and Durham County responded by offering temporary assistance while Robbins is recruiting and hiring a Water System Operator in Responsible Charge (ORC).

The Town of Robbins, population 1,200, is located in northwestern Moore County and operates with a small, multi-disciplinary staff who maintains streets, utilities, and public works. Robbins is still actively recovering from infrastructure damage associated with Hurricane Florence.

Davis Reynolds, a Cary Water Distribution System Operator and a resident of Moore County with 35 years of public service, agreed to serve in the same capacity for Robbins until they hire a new ORC. Davis has been instrumental in supporting Robbins through his contacts with Public Water Supply and the utilities operating in Moore County. Davis and his Durham County counterpart are meeting with the staff in Robbins at least once per week to support their water system management program. Davis also assisted in responding to a water main break in late December.

This is a great example of governments working together as Cary, Durham County, Triangle J and the NC Department of Environmental Quality’s Public Water Supply Section collaborated to support Robbins, ensuring that their citizens have continuous access to clean, safe drinking water. Special thanks to Davis Reynolds for demonstrating the Cary Way by going the extra mile in supporting our neighbors.

To kick off 2019, community center staff is taking over @EnjoyCary on Instagram to showcase the amazing facilities and free classes being offered during New Year, New You. Showcased events include Goat Yoga at Middle Creek, fitness opportunities at Herb Young and a peak behind the curtain at the Senior Center. Still to come are a busy day at Bond Park Community Center and The Hive. Hundreds of followers are watching the Instagram stories and engaging with the fun polls and questions being posted by staff.

WRAL requested the number of incidents for 2016-2018 in the following categories: homicides, robberies, burglaries, and aggravated assaults. You can see the results in the chart below. A special thank you to our records staff who processed this requested in a timely manner despite the New Year’s holiday.

Next week’s activities will be more of a normal schedule. Those duties include staff meetings, a meeting with State Senator Searcy, hosting boy scouts, and a town council meeting.

Well, that is all for this week. My next post will be on Sunday, January 13th.  Although I have Facebook and Twitter accounts those are not the best means of communications with me. Please send all Town of Cary questions or comments to Harold.Weinbrecht@townofcary.org and email personal comments to augustanat@mindspring.com.