Cary, NC – The opportunity was there, playing a team far below them in the standings and no chance to make the playoffs, but the Canes couldn’t figure out how to get more than one past future Hall of Famer, Henrik Lundqvist. The King was on his game and not acting like a 36-year-old goalie should act. He was athletic, agile, sharp with the blocker, good with the catching glove and rarely gave up a rebound.

At the other end of the ice, Curtis McElhinney was just as sharp, giving up one goal while getting knocked into the net and another on the tail end of a five-on-four that started as a five-on-three. As hockey folklore goes, if you score on a 5-on-3, you’ll win, kill the 5-on-3, that team will win proved to be true once again.

Besides the Canes being the hottest team in 2019, add the Bunch of Jerks tee shirts that are the most purchased single Hurricanes item since the Stanley Cup hats back in 2006. Every “The Eye” store in the arena had lines before and at every intermission, they  would certainly be a sell-out by the end of the game. The Canes have already placed orders for over 20 times the original estimate. In talking with some Canes employees who work in the office, online orders have come from numerous NHL cities including as far away as Vancouver and Calgary. 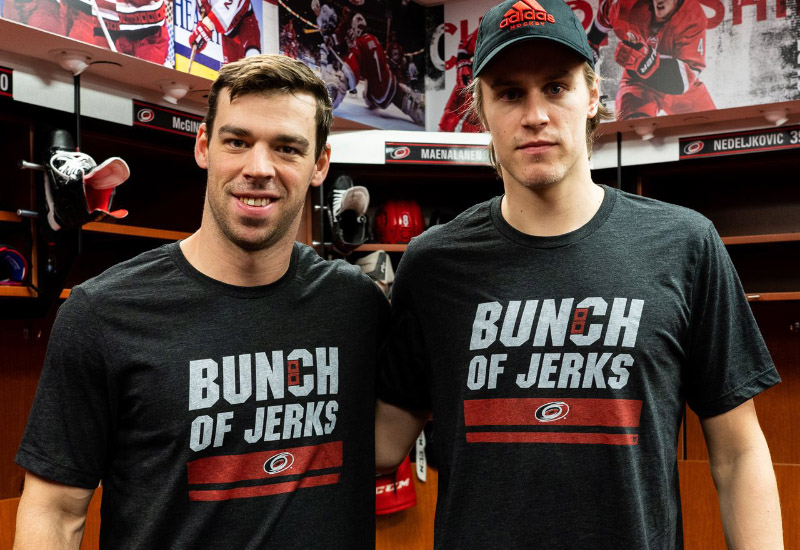 The Rangers won the opening faceoff but it was forechecking by the Canes that had the home team providing the first offensive attack. King Henrik was very sharp early on and you could see he was in a zone. After the Canes were shut down, defenseman Tony De Angelo built a head of steam and made an end to end rush that blew through the entire Canes team on the ice but CMac came up with a great save.

Not to be outdone, Brock McGinn got a pass at the Rangers’ blue line on the far side, did a pretty spinorama then did a nice power move to the goal but Lundqvist pinched the post to thwart the short sided attempt. Unlike the last few games in which the Canes were uncharacteristically outshot, the Canes got their average of 11 shots in the period.

One thing many coaches use as a description of how the Canes’ play is smothering. The Canes were playing their smothering style in all three zone but more so in the defensive end. Smothering is similar to double teaming a player on a puck but in addition to that, smothering involves not allowing any opposing player any open space or time. Very few teams can match the Canes’ speed and stamina but give credit to the Rangers, as they have some very speedy skaters and their first line could be the hottest line in hockey, certainly they are in the top three.

Midway in the period, the Canes had one of the prettiest goals of the season. Jordan Martinook had the puck along the far half boards passing over to Andrei Svechnikov up high. Dougie Hamilton started cutting down from the right point with Svech hitting the tall defenseman with a lead pass. Rather than take a shot from a bad angle, Hamilton saw Marty cutting above the crease and made the sharp pass. Marty’s first shot was blocked by Lundqvist but settled the rebound, putting the puck in over the pads for a 1-0 lead. Marty’s dad was in the stands so you know that had to make that goal that much sweeter.

Just under a minute later, Connor Brickley made a rush to CMac with Calvin deHaan on his back. CMac made the initial save but the rebound at first appeared to be batted in by his arm. After review, the puck went in off his chest, making it a good goal despite the puck, with Brickley and deHaan all going in the goal on top of CMac. 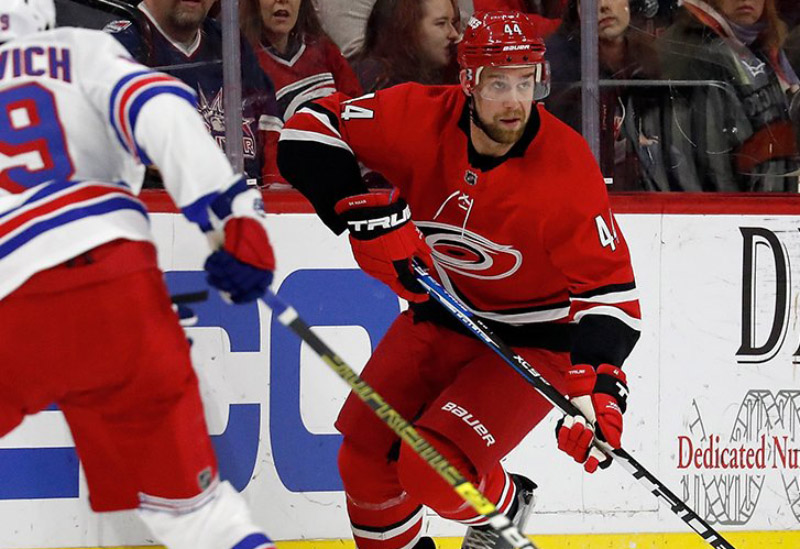 The third period wasn’t pretty by any standards by either team. Sloppy passing, missed checks, failed entries and lack of discipline by the Canes did them in. Taking three penalties in the period in a tight, tied game certainly is not going to help your chances for a win.

The Rangers essentially scored on their second power play of the period. Ginner was off for a trip and two seconds after the penalty ended, the Rangers scored, which goes down as an even strength goal. The Canes shot 18 shots at the goal in the last period, hitting the post twice but couldn’t get one past Lundqvist to send the game into overtime. It’s a hard loss but more importantly, hard to give up those two points.

Also disappointing was without the win, no Storm Surge, which would have been perfect timing considering what transpired over the past few days. The season series ends up 2-2-0 against the Rangers with all games very exciting and entertaining.