Cary, NC – Now in its third year, Cooking for a Classic has brought in funds and attention for the Cary-based Lucy Daniels Center. The latest competition highlights new initiatives at the center and gives participants a chance to win a VIP dining experience.

Cooking for a Classic pits eight regional chefs against each other in a single elimination tournament over the next three weeks. Audience members will taste three different dishes from both chefs each day and vote on a winner. The winner’s prize is a restored classic car, this year a 1981 Jeep Scrambler or $15,000.

Will Anzenberger with the Lucy Daniels Center said each year, the competition has gotten bigger, which is helpful for the center.

“The longer it goes on, the more people build a connection between the event and our organization,” Anzenberger said.

Because the cooking tournament is a unique event, Anzenberger said it brings out new audiences and gets more people educated about the center. The Lucy Daniels Center is the Triangle’s largest provider of children’s mental health care and throughout the event, participants learn about the work the center does.

“During the event, we have slides to tell people about the different programs and people served by the programs,” Anzenberger said. “By helping a child, we help a family.” 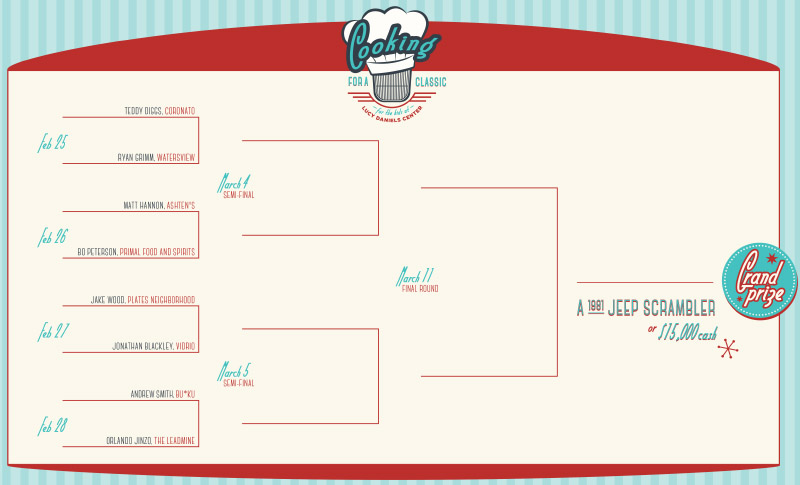 Part of Cooking for a Classic is also about bringing awareness to new programs at the Lucy Daniels Center. One of those is Circle of Serenity, an effort to extend their services beyond Wake County.

“It’s a two-year pilot program, with support from the Duke Endowment,” Anzenberger said.

There are also early success programs the Lucy Daniels Center runs and Anzenberger said they want to spread and expand these but need more support and attention.

“They have just enough fund to keep themselves going but not enough to grow,” Anzenberger said.

New for this year’s competition, guests can bid on special dining packages from the chefs, which can include a special night at their restaurants or even a meal prepared in-home.

“We want the chefs to be involved. They visit the center and learn about what we do,” Anzenberger said. “This is a way for the chefs to give back beyond just their time in the tournament.”

Cooking for a Classic starts with four matches from Monday, February 25 to Thursday, February 28, 2019. There are two rounds afterwards on Monday and Tuesday, March 4 and 5, then culminating with the finals on Monday, March 11, 2019.

Tickets are still available for the semi-finals and finals but Anzenberger said they are going fast.