Cary, NC – This was a very busy week with several meetings in addition to the annual council-staff working retreat.

Monday I joined council member Robinson and the town manager in a meeting with TJCOG (Triangle J Council of Governments) officials. The purpose of the meeting was to find out how we could help each other. We offered to take more of a leadership role to help communities in need (we have already been doing this in several areas such water and sewer).

We discussed the problem with recycling and the fact that it is becoming more difficult for municipalities to get a company to take the recycling. We decided that TJCOG could take the lead in creating a team of elected officials, scholars, and business leaders (who use raw materials) to work on a solution.

Afterwards I joined council member Robinson and the Public Information Officer in my one-on-one meeting with the town manager. We went over the retreat agenda and talked about items that did not make the agenda.

Monday night I attended a dinner meeting of the Wake County Mayors Association. We were graciously hosted by Rex Hospital in their Heart and Vascular Auditorium. Their culinary team created an outstanding three course meal. In addition to a delicious food the presentations were on par for a four star restaurant. If you want to find out more about dining at Rex see https://www.rexhealth.com/rh/patients-visitors/amenities/dining/. Thanks to Rex for being such a great host.

Tuesday I joined all but one council member at a public meeting to hear about what Cary is doing to preserve three historic structures. Properties included the A.M. Howard farmhouse and associated out buildings, the C.F. Ferrell store and two warehouses, and the Barnabas Jones farmstead. All these projects are funded for partial rehabilitation to prevent further deterioration. Future funding will be needed to complete restoration to allow programming at the structures.

Wednesday I wrote a draft of Cary Matters which we will tape next week on location. We will be talking about the Cary Tennis Park in that episode.

Wednesday I chaired a meeting of the Executive Board of CAMPO (Capital Area Metropolitan Planning Organization). Decisions included:

Our meeting concluded after a little over an hour.

Later Wednesday I taped a video on a portion of the State of Cary address at the Cary Theater. Since there wasn’t a teleprompter I had to memorize segments in addition to doing voice overs. This will be an abbreviated version of the State of Cary address which can double as a promotional video for the town. I finished the taping in a couple of hours.

Thursday council and staff traveled to Asheville for our annual working retreat.

The North Carolina metro mayors met Friday. Here is a summary of that meeting:

Friday was the first full day of the council-staff retreat.

The morning session started with a downtown redevelopment update. We were shown all the sites under redevelopment or planning to redevelop. We discussed changes that are needed in the Land Development Ordinance that would help prevent undesirable things like parking lots along Chatham Street. We were also updated on the proposal at the corner of Harrison and Chatham that has been in the works for about ten years and includes George Jordan’s development, the town, and the First Baptist Church. Unfortunately, it appears the church has once again changed their minds. At this point I don’t think there is council support to continue the partnership. We will see. That would have been a great project for the town and the church. I am sad that we will probably see something less instead.

Some good news was that the First Methodist Church continues to partner with the town on parking and other issues. That will certainly help that end of Academy Street. We talked a great deal about the mixed-use proposal in the works that would wrap the parking deck. We were shown several pictures of what that might look like. That proposal should come before council soon. We also talked about the current library. We agreed that the site, which goes from Academy to Harrison, would be better redeveloped as a mixed use and an underutilization to keep the current structure. We will focus more on this as the new library gets close to coming on line.

The second presentation in the morning session was from the owner of Urban3. He believes it is important to change the development paradigm in downtown areas. That is, the more dense the use the better use of infrastructure and the more cost effective. He argued that without this way of thinking sustaining infrastructure will be more and more expensive and time goes on. That information was very helpful as a data point in our future decisions. However, there are lots of data points when considering downtown redevelopment.

The council had lunch with Asheville Mayor Esther Manheimer. We learned a great deal of how they are doing projects, their successes, and their failures. They continue to struggle with their county leaders and the legislature. Cary is fortunate that our county leaders continue to work with us on many issues.

The afternoon session included an update on the Cary Downtown Park. We learned that concept two, of the three master plan alternatives presented last fall, was chosen. That concept has a plaza next to the town square, a children’s area next to the library, a multi-purpose architectural element along Park Street, a pavilion next to the water feature, a Café/Bark Bar along Walker Street, and several other amenities. The Master Plan approval is scheduled to come before council on March 14th. Design will begin in May with a bond vote scheduled for October. If all goes as planned construction should start in 2020.

Before dinner on Friday the council and staff were treated to a trolley tour of downtown where we learned about architecture, Thomas Wolfe, and former North Carolina Governor and Senator Zebulon Vance.

Friday night the council and staff met for dinner. At the dinner we honored our town attorney who received the Grainger Barrett Award for Excellence by the Government and Public Sector Section of the North Carolina Bar Association. The purpose of this award is to honor an outstanding government or public sector attorney as an exemplar of the excellence, dedication and passion for justice of North Carolina’s government and public sector attorneys. She was selected from nominees that met the following criteria:

We are so very proud of Chris and are blessed to have her as our town attorney. 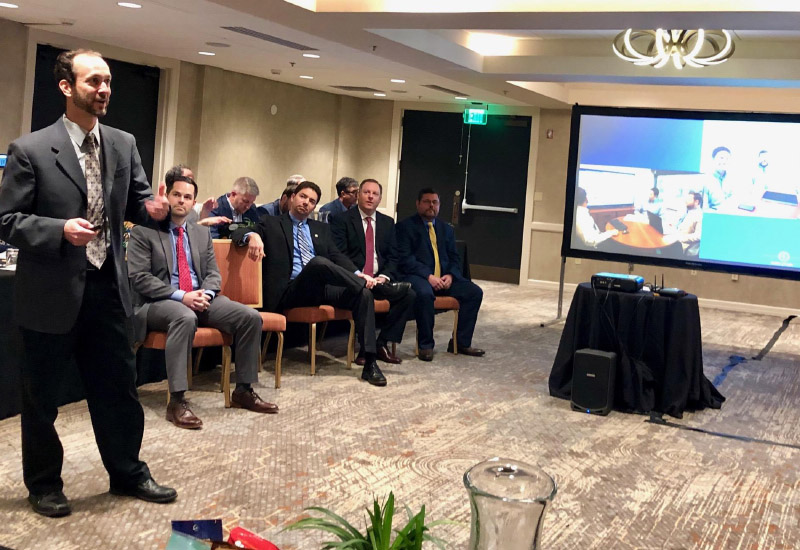 Saturday’s morning session started with a presentation of a collaborative effort across departments to address the problem of private streets. Private streets require the owners of the business or the residents along the street to maintain the street. Many residents don’t know or care that they live on a private street and do not believe they should maintain it. However, their units were built for less because their developer had private streets which are a lower than town standards. A committee was formed to investigate this issue. It included individuals from transportation and facilities, finance, police, and planning and development. They reported that sense private streets associated with businesses and apartments are maintained to help market those to potential customers the real problem was mostly with townhome developments.

After tackling dozens of issues including developer concerns, homeowner association concerns, property management concerns they are close to a solution of new design standards. These would have an alley for rear parking which would allow for more aesthetically pleasing views on the main street. Council will get a proposal for an amendment change in the near future. This collaboration was a perfect example of breaking down silos and of how to consider all portions of the Cary Community Plan. Kudos for all staff involved in this effort.

Our last morning session was about leadership from Dr. Horniman of the University of Virginia. He emphasized the importance of understanding the value that each of us has and invited us to ask ourselves what value we bring to the organization. He also challenged us to invite, include, and inspire others in all that we do. He was a very impressive and inspiring speaker and we all thoroughly enjoyed his talk.

The afternoon session was a summary from the town manager and a preview of quarterly meetings for the year. Some of the topics for this year’s quarterly meetings include branding, our quasi-judicial framework, body cam demos, 3-1-1 (which goes live in January of 2020), stormwater, the 150th celebration, neighborhood services and code enforcement, and recycling. Our retreat concluded mid-afternoon on Saturday.

Sunday I taped the outdoor segment of the State of Cary address. This was taped on the Speight Branch Greenway. I only had four lines in this taping. We did about a dozen different takes to get all sorts of angles and views. Afterwards we did a promo taping to celebrate 40 years of greenways in Cary. We did about four or five of those takes. All together we spent about an hour doing the tapings.

Emails for this week included:

Next week’s activities include staff meetings, a taping of Cary Matters, a public meeting on the Carpenter Fire Station Road widening, a ribbon cutting for the Raleigh Improve which is located in Cary, and a State of Cary presentation to Searstone.

Well, that is all for this week. My next post will be on Sunday, March 3rd.  Although I have Facebook and Twitter accounts those are not the best means of communications with me. Please send all Town of Cary questions or comments to Harold.Weinbrecht@townofcary.org and email personal comments to augustanat@mindspring.com.