Cary, NC – Since the calendar turned to 2019, the St. Louis Blues have been the hottest team in the NHL with the Canes #2. The Canes home record was identical to the Blues away record at 17-10-4 so that changes as the Canes came from behind pulling out a resounding 5-2 win.

Curtis McElhinney started in goal and has been very solid in net all season but had a difficult time handling the first shot of the game. Jaden Schwartz, who seems to always have a good game against the Canes, took the first shot two strides as he crossed the blue line. The shot was a knuckleball that had CMac twisting like a pretzel before finally making the first save of the game.

Just under the seven minute mark, Vince Dunn had the puck at the left point, Brock McGinn tried to push Dunn over the blue line. Dunn avoided the attempt, took a couple of strides, then let go a hard slap shot that barely ticked off Oskar Sundqvist’s stick, getting past CMac for the all important first goal. Rod Brind’Amour put the first line on the ice for the ensuing faceoff. Sebastian Aho won the faceoff allowing the Canes to enter the Blues’ zone with the puck. Jake Allen froze the puck off a Justin Faulk shot, forcing a faceoff to his right. Nino Niederreiter took the faceoff after Seabass got bounced for a quick stick. El Nino won the draw back to Brett Pesce, who passed to Justin Williams along the near boards. Willie passed back up to Pesce as he was moving towards the middle, then after a quick look at the net, made a return pass to Willie who sent a one-timer from the top of the circle, à la Alex Ovechkin, to the back of the net to tie the game.

Three minutes later on their next shift, with the play still in the Blues’ end, Seabass calmly passed over to El Nino who had time and space. With a defender quickly approaching passed the puck up to Faulker on the right point, Faulker kept his head up, inching his way to the net then let go a wicked wrister that hit nothing but net getting the crowd really into the game. 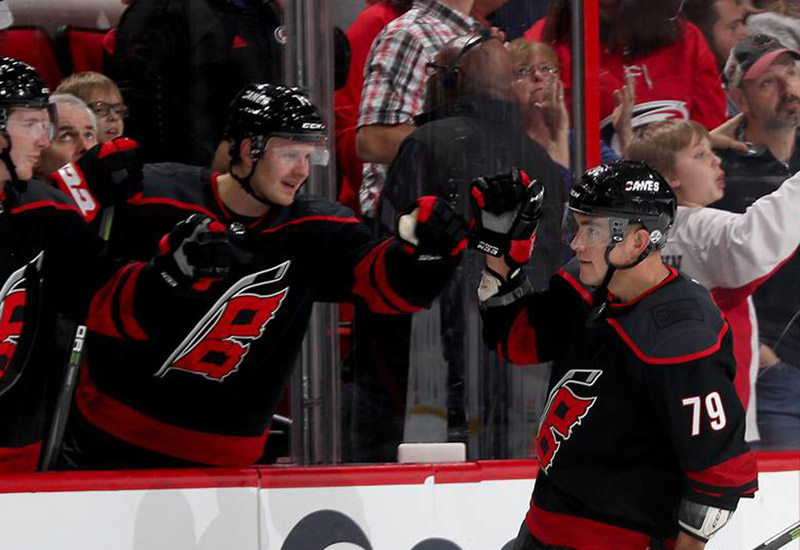 Aho Gets Shortie With Hustle

With Evander Holyfield in attendance, as he was the siren-sounder, the game was looking like a heavyweight bout with each team getting their shots in spurts, like a boxer does in the corner. The Blues fought back early in the second when Dunn took another shot from the left point. The puck looked like a wounded duck as it was fluttering and was a head hunter. While it appeared it glanced off Sunqvist’s helmet, the puck’s trajectory knuckleballed down into the far side of the net that CMac didn’t see, with all the traffic in front of the crease. Late in the period, Pesce made what initially appeared to be a fantastic steal of the puck with a great stick check. However the ref saw it a different way, calling Pesce for a hold. As soon as the whistle was blown and Pesce was called for the penalty, he looked to the sky and started smiling all the way to the sin bin.

The Canes’ penalty kill was doing great, allowing just one shot that CMac handled with ease. Teuvo Teravainen retrieved a block made by Jordan Martinook, sending the puck 190 feet to the far corner. With Seabass racing to the Blues end, Allen skated over to settle the puck but paid too much attention to Seabass, allowing the puck to bounce into the no-goalie zone. Seabass cut between Allen and the puck, grabbing it then quickly went around the net to stuff it in to put the Canes up by one, his 26th of the year and tied for a league-leading fourth shortie for the year.

If there’s one very noticeable improvement of this team over Canes’ teams in the past few years, it’s that this team knows how to win with the lead. That doesn’t mean turtle, it just means smart possession and keeping the clock running. With an away game the next night, Roddy continued to use all four lines to hopefully keep everyone fresh. Midway in the period, with the second line on the ice, the Canes all but sealed the win. Dougie Hamilton had the puck along the half boards, then sent the puck around behind the net. Turbo saw Jordan Staal open and made a gutsy pass cross ice that Staal buried with a one timer.

The Blues dug deep and started getting a little chippy after that goal. On one play, Andrei Svechnikov and Robert Bortuzzo were going at it behind the net with Svech going down after being tripped. He immediately got up and gave Bortuzzo a love shove that Bortuzzo took as an invitation to drop the gloves. In comes linemate Martinook to take care of business and that turned into a practice sparring match that he’d use later in the evening. Allen was pulled with a little over two minutes left.

Faulker tried for his second 195-foot goal in three games but the shot went wide, forcing another faceoff to CMac’s right. Marty won the faceoff back to Faulker who passed over to Pesce. Pesce cleared the puck over the line to Svech and with one defender, crossed the redline and, using Marty as a decoy, sent a hard wrister in the empty net to close out the scoring.

The Storm Surge was fantastic. The Canes gathered around the middle circle doing the Skol Clap while Martinook was changing into white gloves then went to the middle of the circle. Out comes Holyfield with his 4X jersey (for four times world champ) and boxing gloves on to the roar of the crowd. Holyfield and Marty touched gloves then started circling when Holyfield landed a right cross to Marty’s jaw sending him sprawling to the ice as the rest of the Canes surrounded Holyfield for his fifth Championship title. Great entertainment.

Next home game is Friday, March 8, 2019 against Winnipeg. Be There! 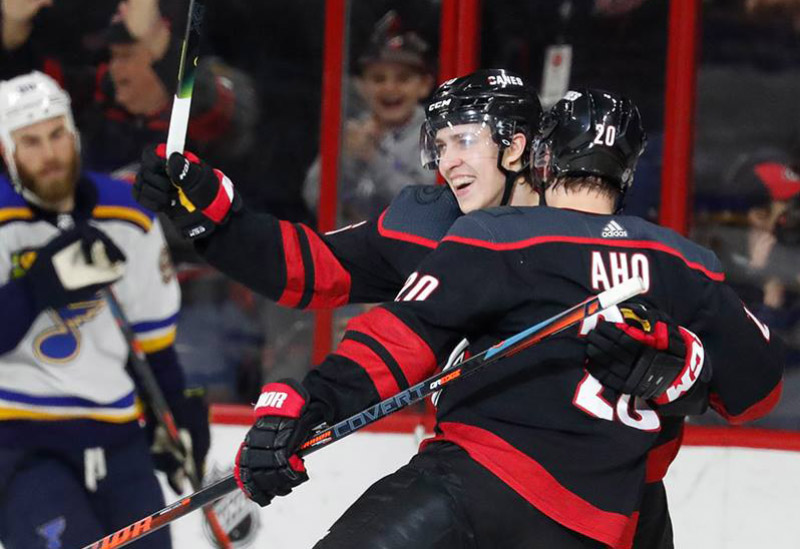 Spring Sports Are Almost Here: How Equipped Is Your Family?