Cary, NC – The festival of comedic and inspiring one-act plays is back in Cary as LITE returns with eight plays, all developed over the last year.

LITE, which stands for “Laugh, Inspire, Think, Encourage,” is a co-production of playwright Jack Berry and the Cary Playwrights Forum. And like the name says, Berry said he wants the plays to make audiences laugh, think, get inspired and feel encouraged.

“There aren’t any depressing plays. Some are funnier, some are more thought-provoking, but there aren’t any ‘therapy sessions,'” Berry said. “We want plays will entertain people who may not go out to see live theater.”

The shows also accept donations to Meals on Wheels of Wake County.

The show, running at different venues this March, is made up of eight one-act plays, all of which have a complete story and narrative even with their short length. Because of the length of the plays and the limitations of the small stage, the plays have to be relatively low-tech and have small casts but Berry said they still got a large amount of submissions.

“We have a committee to select the plays and we went through 200 scripts,” Berry said. “One-act plays are very competitive.”

This year’s LITE includes plays written both by locals, including Berry, as well as some from around the country. But even people who did not write one of the eight scripts still have a way to get involved in LITE and the show was open to anyone who wanted to help.

“You can do as much or as little as you want. If it’s your first time working on a play, you can see how you want to fit in,” Berry said. “In theory, everyone has ownership of the entire show.” 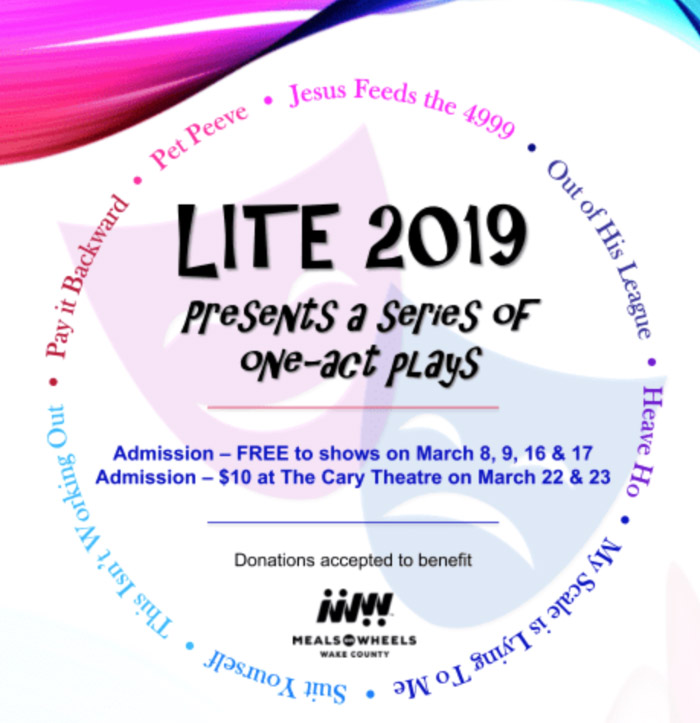 In addition to the collaboration, Berry said one of the aspects that makes LITE unique is how long they work on it.

“LITE runs once every two years. In March 2018, we got started on putting this year’s show together,” he said.

Additionally, the show does not audition actors, both because Berry said they know who in the area is a good actor already and also because directors and writers bring their own friends and actors to the project.

Berry also said LITE gives playwrights a chance to get their scripts produced and work with directors to make sure it is performed the way it was intended.

“We wrote it for a reason and we want to see it honored,” he said.

“It’s a big beautiful venue and we’d love for it to have our biggest crowd,” he said.

There are also two shows at Heritage Pines and Carolina Preserve on Friday and Saturday, March 15 and 16, but those are for residents only.