Cary, NC – In a big soccer double-header, both North Carolina FC and the North Carolina Courage won their games at WakeMed Soccer Park, getting the seasons started right for both teams.

At the Saturday, March 23, 2019 double-header at Sahlen’s Stadium at WakeMed Soccer Park, North Carolina FC took on Club Necaxa from Liga MX, Mexico’s top professional soccer league. This match was meant to be a way for the two teams to collaborate and learn from each other’s business insights.

The season started this month for NCFC and they are already in their fast play-style, with two near goals by the home team in the first five minutes. This quick attack paid off when, in the 20th minute, Austin Panchot got the ball from Dre Fortune and Manny Perez, giving NCFC a 1-0 lead.

Perez would continue to contribute to the score as he ran the ball up the field five minutes later before passing to Caleb Duvernay, who got the shot right over Necaxa goalkeeper Yosgart Gutierrez to give NCFC a 2-0 lead in the first half. These were Panchot and Duvernay’s first ever goals for NCFC.

After these goals, gameplay slowed down as neither team could score on the other. In the second half, Necaxa mounted their comeback as Ricardo Marín and Pedro Campos weaved through the NCFC defense and got Campos right up against the net, scoring a point blank goal.

Necaxa would continue to assault NCFC’s defense for the final minutes but NCFC’s goalkeeper Darrin Macleod made several saves and kept the score to 2-1, giving NCFC the win.

Warm-up for the Champions

The double-header started with the reigning champions, both in the NWSL and internationally, playing a pre-season game against the Orlando Pride.

The Pride are one of the league’s top teams and were tightly matched against the Courage, with neither team able to score until the 35th minute. Meredith Speck took advantage of a failed clearance and got into the box, intercepting the ball and kicking it in from a close range, giving the Courage the lead.

From there on, it was a runaway victory for the home team champions. In the 61st minute, Jessica McDonald got the ball from Lynn Williams, getting it around Orlando goalkeeper Ashlyn Harris and scored. A few minutes later, Williams got in close to the Orlando box, got an assist from Leah Pruitt and brought the score up to 3-0.

To round things out, in the final minutes, Julia Spetsmark got the assist from Elizabeth Eddy and the game ended with a 4-0 win for the Courage.

The Courage’s season opener at home is against the Chicago Red Stars on Saturday, April 13 at 7 PM. NCFC’s next home game is Saturday, March 30 at 7 PM. 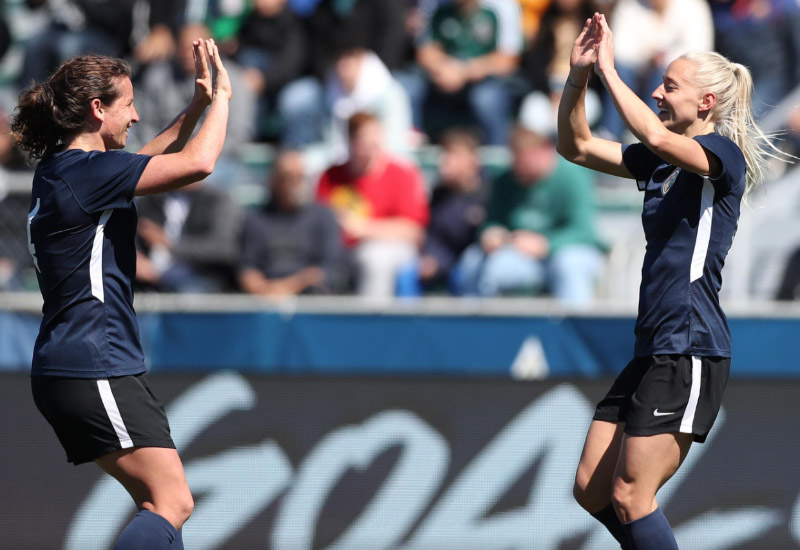