Cary, NC – Cary is home to the 2018 National Women’s Soccer League (NWSL) champions, 2017 and 2018 NWSL shield winners and the first International Champions Cup Women’s Tournament winners, the North Carolina Courage. And the Courage came back for a new season, starting with a draw against one of the league’s other top teams, the Chicago Red Stars.

More than 4,000 fans came to Sahlen’s Stadium at WakeMed Soccer Park on Saturday, April 13, 2019 to see the Courage take on the Red Stars. The game started with the home team dominating control of the ball but they could not turn that into a goal. The Red Stars were kept on the back line but gradually clawed their way back until the 26th minute.

At that time, Chicago’s Yuki Nagasato played through the Courage’s defense and passed to Sam Kerr, who won the NWSL Golden Boot award last year. Kerr showed why she’s such an acclaimed player as she got the ball around goalkeeper Stephanie Labbé and started the game with a 1-0 lead early on.

For the rest of the first half, the Courage were unable to get a response. Lynn Williams came close in the 42nd minute with a big kick that curled into the right side of Chicago’s goal. But Chicago goalkeeper Alyssa Naeher did a big dive and blocked the ball, keeping the lead for the Red Stars.

In the second half, Jessica McDonald hit a kick that looked risky but made it to Crystal Dunn. Dunn dribbled the ball briefly before a big low shot that made it into the left side of the net. Neither team scored after that and the Courage’s home opener ended 1-1. 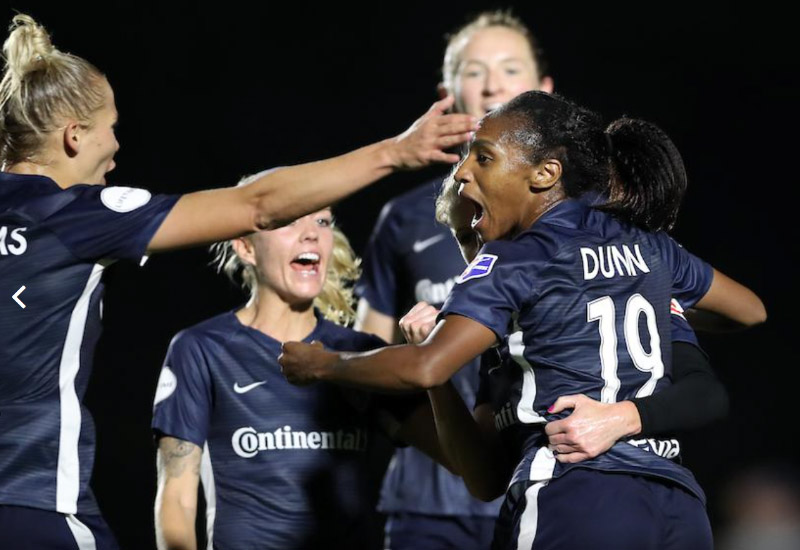 Looking to the Season

With this draw, the Courage have not lost a game since June 2018.

“I thought it was a really good performance for us,” said North Carolina Courage Paul Riley. “We put Chicago under a lot of pressure. Our quality of play was very good for the first game of the season.”

After winning both the 2017 and 2018 season as well as the NWSL Championship last year, it’s safe to predict the Courage will go far this year. The team has retained many of the same players that brought them success in 2018, with nine of the 11 players who started the 2018 championship game starting at this home opener.

Dunn scored eight goals last season and her difficult goal this game shows that she will continue to be a top asset for the team.