Cary, NC – For the first time in this head-to-head series, the home team did not score the first goal that also led to the home team winning the game but the Canes answered in a resounding manner, typical of the playing days of coach Rod Brind’Amour, with a 5-2 win over the Washington Capitals.

The Canes did have Jordan Martinook back in the lineup, while the frenzied crowd did not need anything more to get pumped up: Roddy had the Canes third line of Martinook, Lucas Wallmark and Warren Foegele start the game against the Caps’ second line.

Once again, the Caps won the initial faceoff but for the entire first of the game, all the play was in the Caps’ end of the ice as the Canes’ signature solid forechecking was in play. 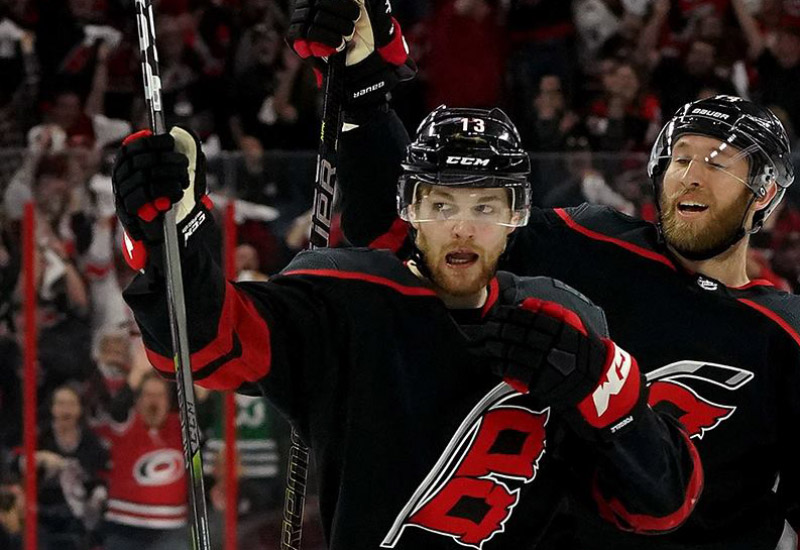 Knowing their backs were against the wall and coming off their worst performance of the playoffs in game five up in Washington, the Canes needed to, and did, start the game on time with a renewed sense of urgency along with their patented forechecking. Erik Cole was the initial siren sounder and got Caniac nation in playoff game form when the Canes made their initial step on the ice as the decibel level was extremely high but nowhere near the levels in the third period.

The hitting from both clubs again, was hard, often and with a purpose to get the opposing player as worried about the ensuing check as he was about corralling the puck. The Caps struck first on a shift Sebastian Aho would rather forget. Seabass, who has been timid all series, turned the puck over in his own end leading to a Washington rush up the ice by Andre Burkovsky who sent the puck along the back boards. Lars Eller, covered by Trevor van Riemsdyk, went around the back of the net, but so did Seabass which left Brett Connolly wide open who got the pass from Burakovsky for an easy top shelf goal past Petr Mrazek.

A little while later, the Canes were on a powerplay that lately has had only one decent result and that was keeping The Great 8, Alex Ovechkin, off the ice for two minutes. This powerplay was head-and-shoulders better than any they had in game five and while they didn’t score on the powerplay, Foegele did score just five seconds after the penalty ended on a pretty turnaround that is one of the hardest shots a goalie can face. Jaccob Slavin, who played another unsung but outstanding game, started the play up top passing over to fellow blue liner, Dougie Hamilton on the left point. Hamilton is a shoot-first type defenseman, took a few strides going right to get the shot off that bounced off a body.

Foegele picked up the loose change with his back to the goal and in one motion swung around like a player on a swivel hockey board, with Nick Jensen’s stick in two pieces on the ice, flung the puck along the ice banking it in off the post to Braden Holtby’s right to tie the game. Late in the period, Ovi got a pass from Dmitry Orlov in the neutral zone. Ovi was gaining speed in the neutral zone when Hamilton made a calculated risk, in this case a miscalculation, by jumping up to intercept the puck but missed allowing Ovi a clear path to Mrazek and by the time a Cane defender tried to pick him up, Ovi sent a hard ice burner in short side to put the Caps up by one which is how the period would end.

The Canes’ play in the first was light years above their entire last game in Washington and the key was: could the Caniacs as the seventh player help that momentum continue through the remaining two periods?

In between periods, no doubt Brind’Amour told the team even being down by one, they had this game within grasps and would win if they just stopped mental errors and dug deep without quitting on a play. If those were his words, nothing better examples that early in the period. Seabass made a bad play in the offensive zone that led to a turnover with the Caps making a fast rush.

Rather than lolly gag behind the play, Seabass skated hard 175 feet stealing the puck behind Holtby’s net, had three teammates to pass to and chose fellow Finn Teuvo Teravainen coming down hard from the high slot who put a wicked wrister in to tie the game. Nothing could be scripted better as it got the Canes, and more so the Caniacs, back into the game with just 1:56 gone. The hitting by both teams continued with the officials apparently had their game plan of letting the boys play. That plan only led to more chirping back at the officials by both teams and you could the refs starting to become agitated with all the advice on what should or should not be called.

Late in the period, Martinook got called for a trip, which by definition was a trip but compared to the way the game was being called and the infraction was along the boards in the neutral zone with no impact on the game was a bunny call, however also called Orlov for embellishing just to even things out. Justin Williams made the end of the period exciting when Brett Pesce cleared the puck with a high lob that Willie reached up to knock the puck to gain possession when Holtby was racing out to clear the puck. Willie twisted the puck behind Holtby into the far corner but the goal was called off due to the stick being above his shoulders when he caught Pesce’s pass. Period ends 2-2 to pitch up a do or die final period for the Canes. 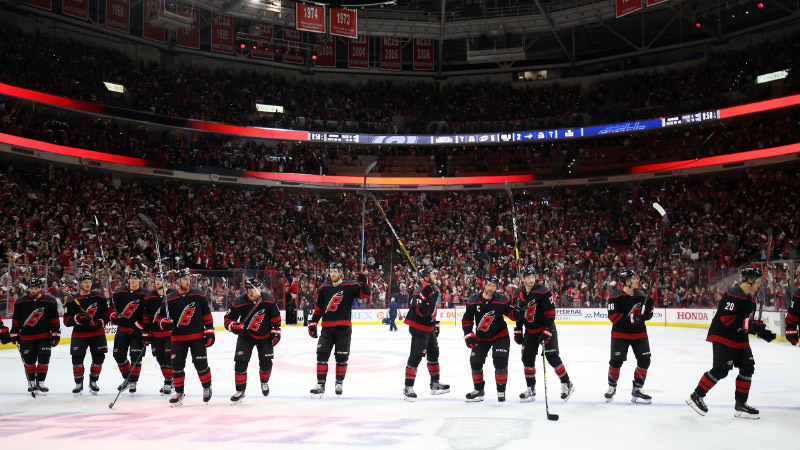 The reception the Canes had as they came onto the ice in the third was off the charts. The Caniacs knew they had to do everything they could to get their message they wanted more hockey at the PNC Arena. Early in the period, Justin Faulk, who had another solid game, dumped by puck deep. Brock McGinn used his speed and tenacity style forechecking to punch the puck from two defenders behind the net to the dirty area of the crease.

Big man Jordan Staal was battling for position right on the top side of the crease between two defenders and just as he was taken down, managed to get his blade of the puck for a greasy goal as is squeezed under Holtby’s pad to put the Canes up for the first time in the game. A short time later, after another strong forecheck by Ginner forcing a turnover to the near corner, Staal out-muscled his man to corral the puck sending it up to Pesce who charged over the blue line for a shot.

The shot was going wide by Willie had great hand eye coordination tipping the puck down to bounce between the pads to give the Canes a solid two-goal lead with plenty of time for the Caps to get back in the game. Mrazek brought his A game as he made several stops that would have been sure goals in the previous game, that had everything go wrong. The Caps had one sequence of great passing that saw Nicklaus Backstrom deflect the puck that looked like a sure goal but Mrazek made the save of the game. On the next play, it appeared the Caps scored but while they were celebrating in the corner the ref was signaling the no goal or safe sign. That happened at the second TV timeout which gave the refs time to check with Toronto who confirmed the call on the ice sending the decibel level up a notch.

With Holtby pulled with just over three minutes to go, Martinook got possession of the puck in the Canes D-zone passing over to Hamilton along the far boards. The tallest Cane crossed his blue line into the neutral zone and methodically sent a smooth shot 110 feet into the empty net to seal the win. With 1:08 left, possibly out of frustration with the score, possibly with the officiating, possibly because of retaliation for something that happened earlier, or just because, Ovi slashed Saku Maenalean’s stick and flattened him right in front of the Canes’ bench, killing any mojo the Caps had in mind for the last minute of the game. Ovi went into a rage, saying a more than a few words earning him not only the last penalty of the game but also a 10 minute game misconduct.

Canes win 5-2 setting up the first seven game playoff series the Canes have faced since Justin Williams sealed the Stanley Cup with an empty netter back in 2006. Can Mr. Game 7 do it one more time in Washington on Wednesday? I did have a small conversation with Craig Laughlin, the TV analyst for the Caps. He’s a fellow Clarkson alum and said how much the Canes have impressed him and if he had a choice, he’d love to live in this area as he loves the weather and energetic atmosphere the area is known for.